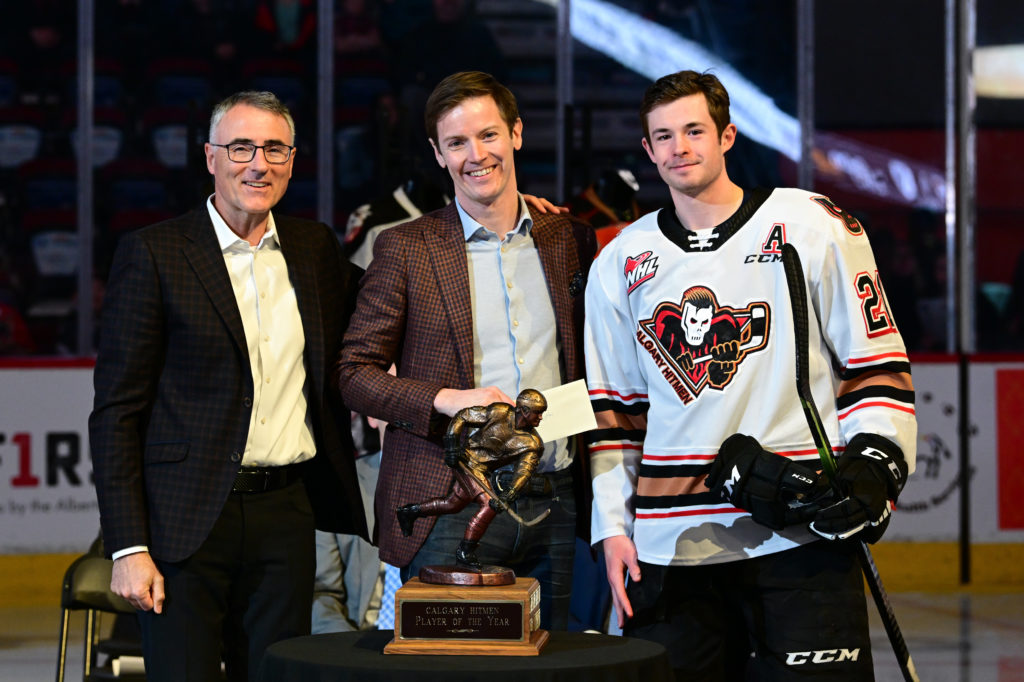 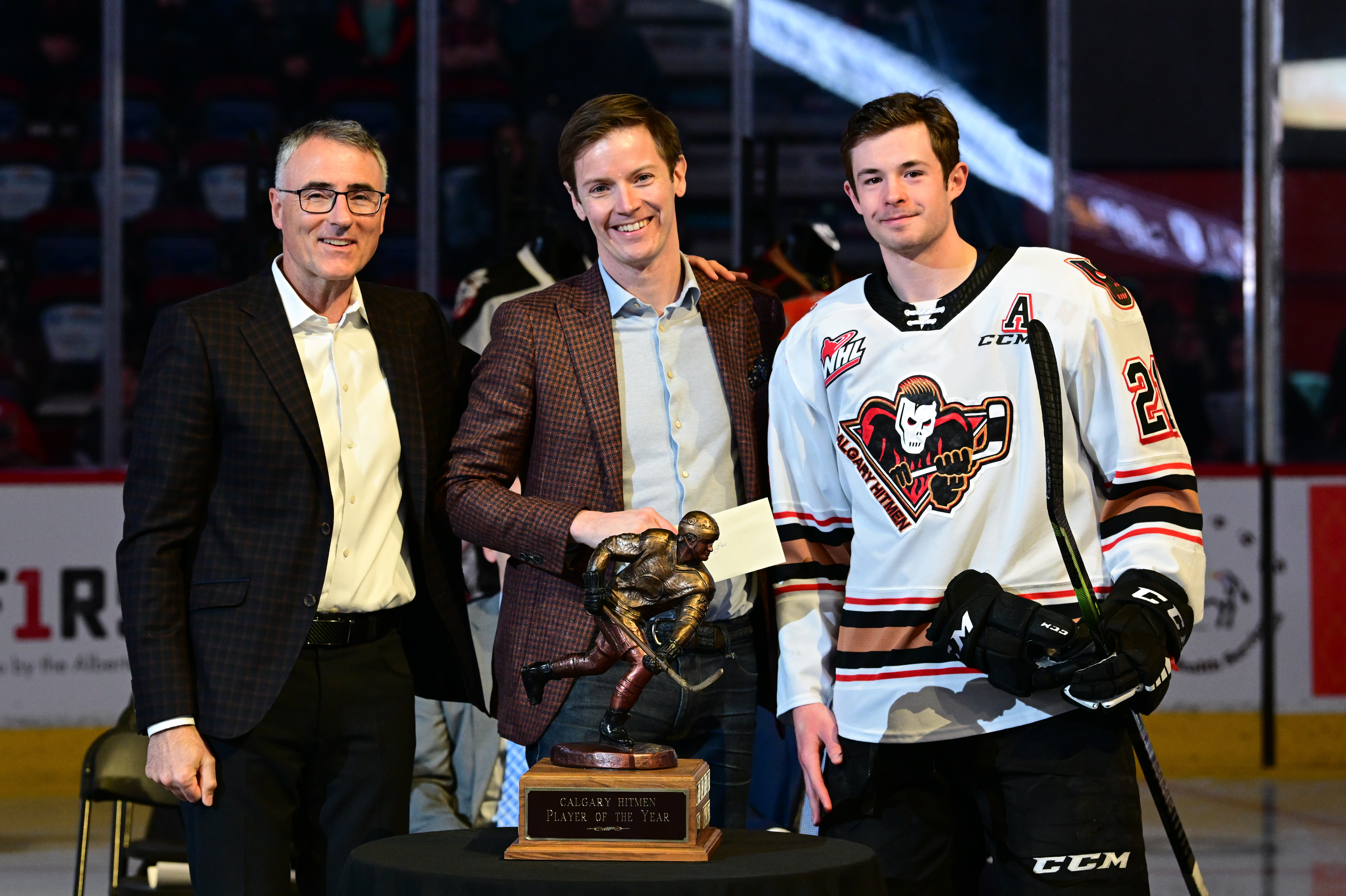 Player of the Year – Riley Fiddler-Schultz

Previous winners include Ryan Getzlaf and Martin Jones. Leading the team in goals and assists, Riley Fiddler-Schultz was the definition of a two-way centre. He remained amongst the best in the league for Face-offs won and shots on goal throughout the season. Wearing a letter this year, he showed his leadership through his commitment to the team and his own performance, while finding time to give back to the community. 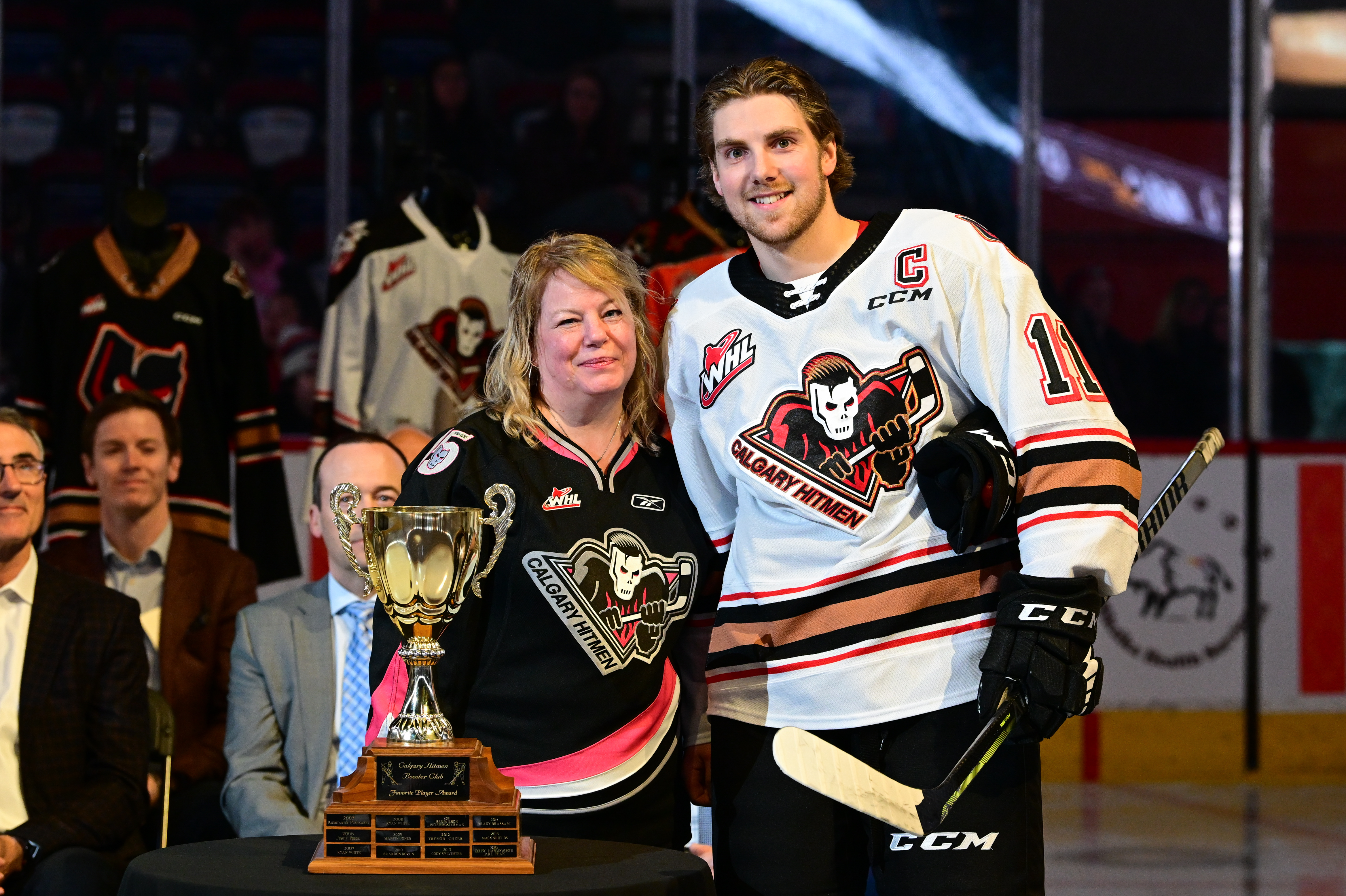 This award is voted by the fans, who we cannot thank enough for their loyal, enthusiastic support through a hard couple of years. Cael Zimmerman’s high compete level and passion not only earned him a letter on his jersey, but also posted a career best season notching 30 points. The centreman was leader and a staple throughout his time with the Hitmen over his five seasons and it wasn’t hard to see why he had become a fan favourite. 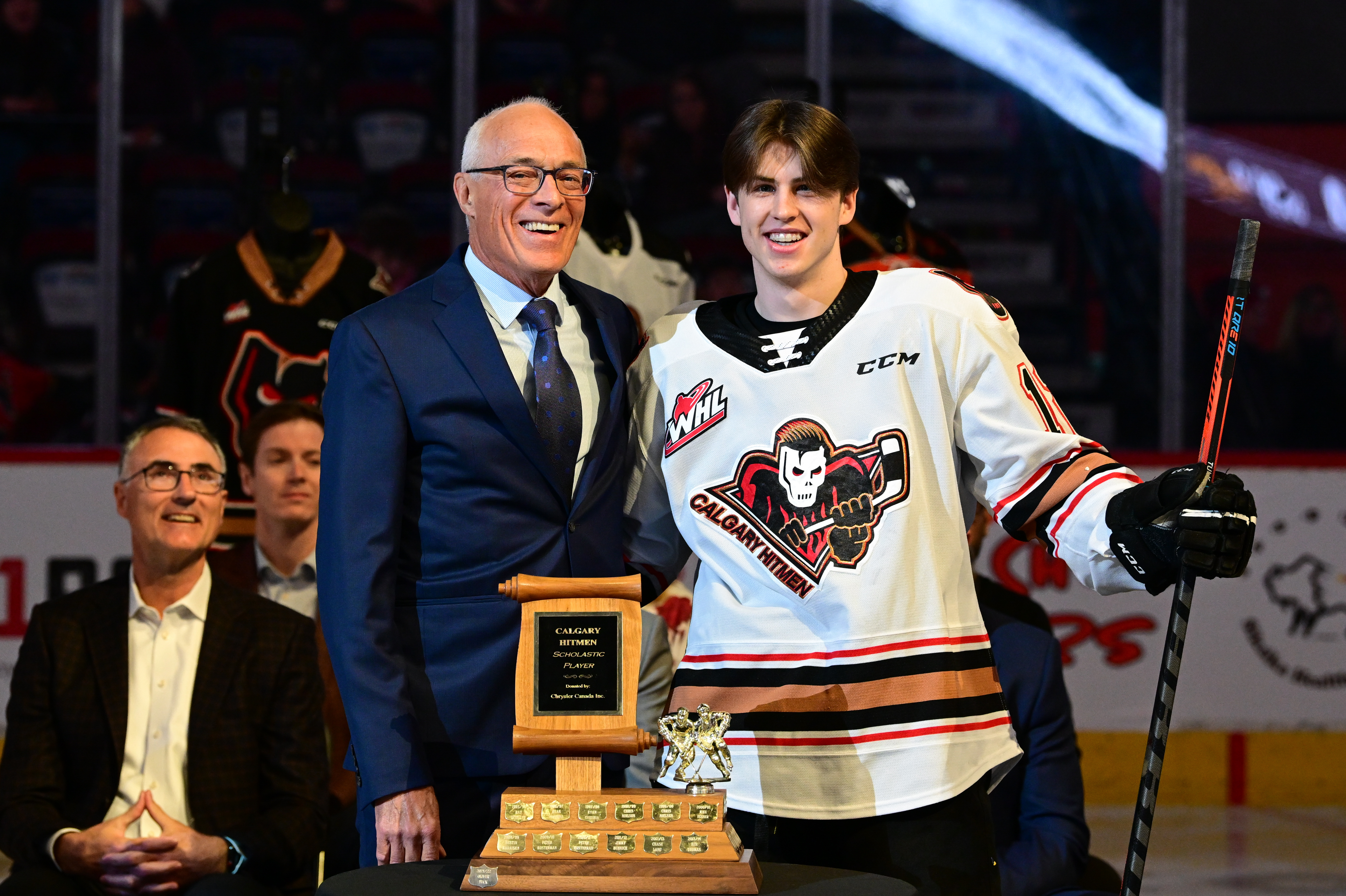 Scholastic Player of the Year presented by RAM – Oliver Tulk

Balancing hockey and education is a must for Hitmen players. Oliver Tulk was drafted in the first round in 2020 WHL Prospects Draft and went on to become a mainstay centreman, playing more than 60 games in his rookie season and tallying 19 points. Off the ice, he excelled in the classroom posting a remarkable average of 87% percent in his grade 11 core and online subjects. Tulk dedicated himself to both his studies and on ice performance. 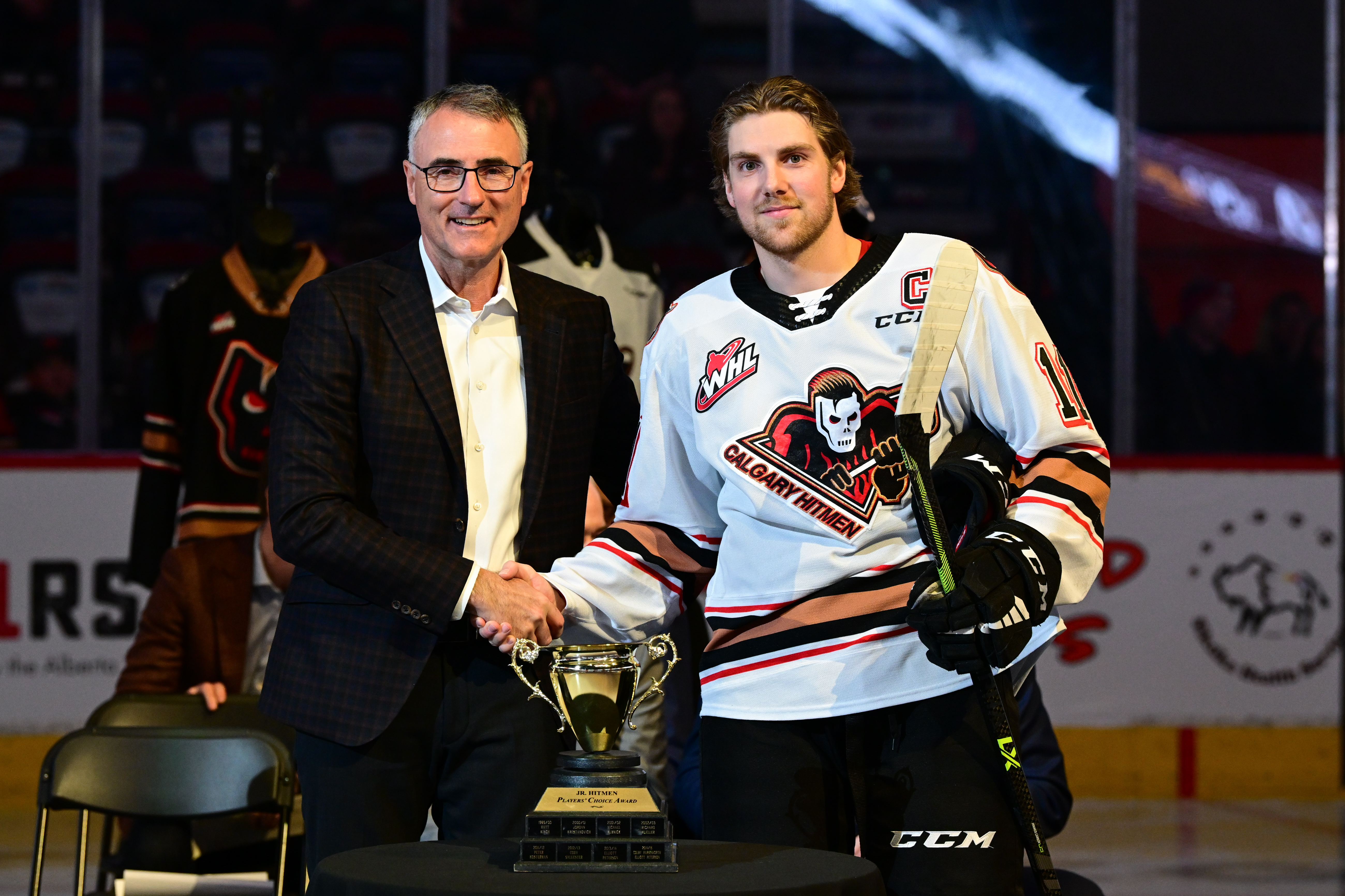 This award was voted on by the players themselves and goes to the recipient who personifies what it means to be a Hitmen player through commitment to their teammates and the game itself. Cael Zimmerman led by example on and off the ice and was a veteran presence up front and a key driver of offense. He wore a letter for the second season in a row and held the captaincy for the second half of the season. Mentoring his teammates and always putting the team first earned him the Player’s Choice Award. 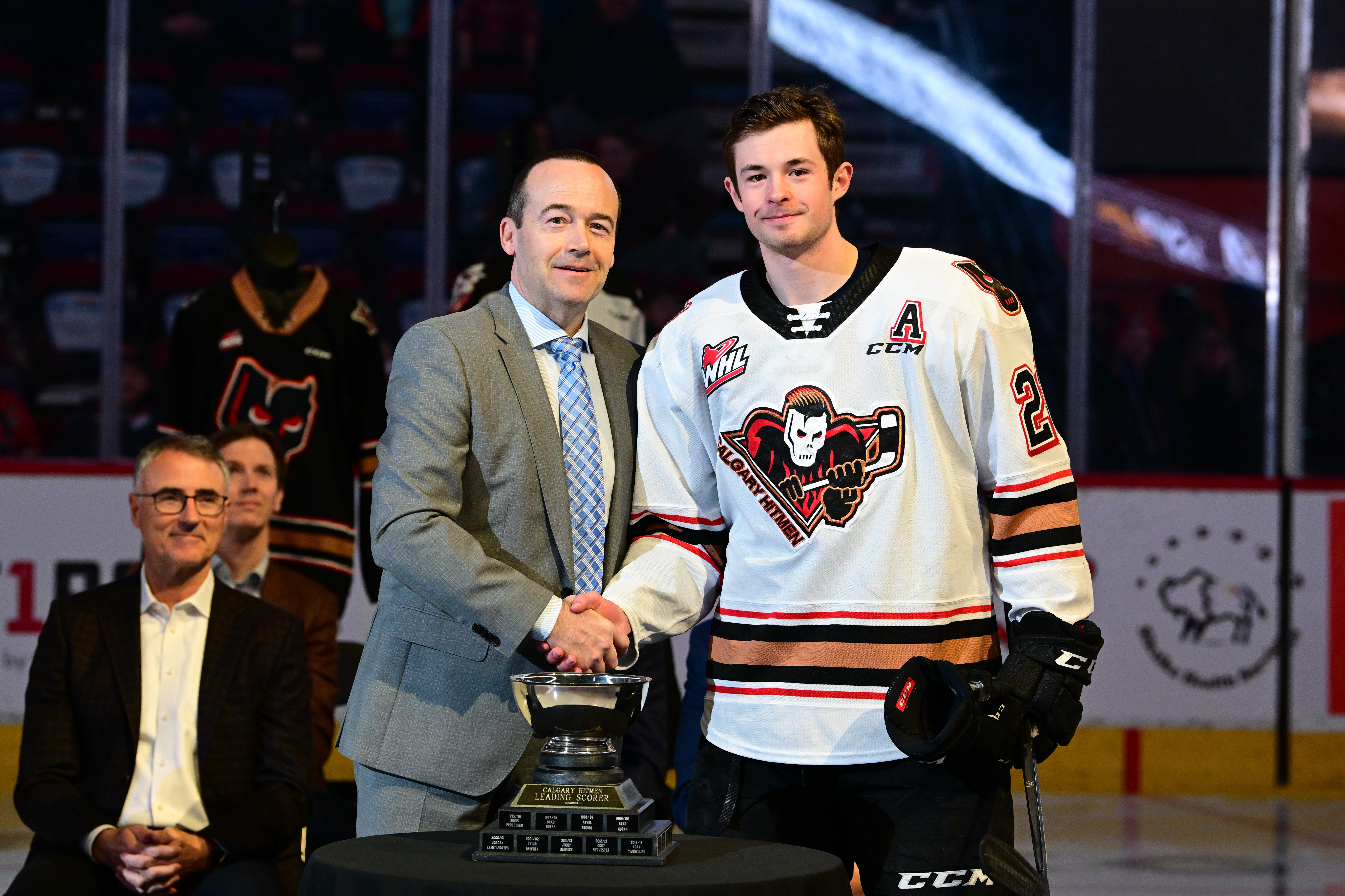 This award is voted on by the media, who we would like to thank for their continuing coverage of the Western Hockey League and the Calgary Hitmen. It includes ballets cast for all regular season games. Riley Fiddler-Schultz was named the most amongst the 3 stars throughout the season, leading the team in trips to the top of the podium as the game’s first star. 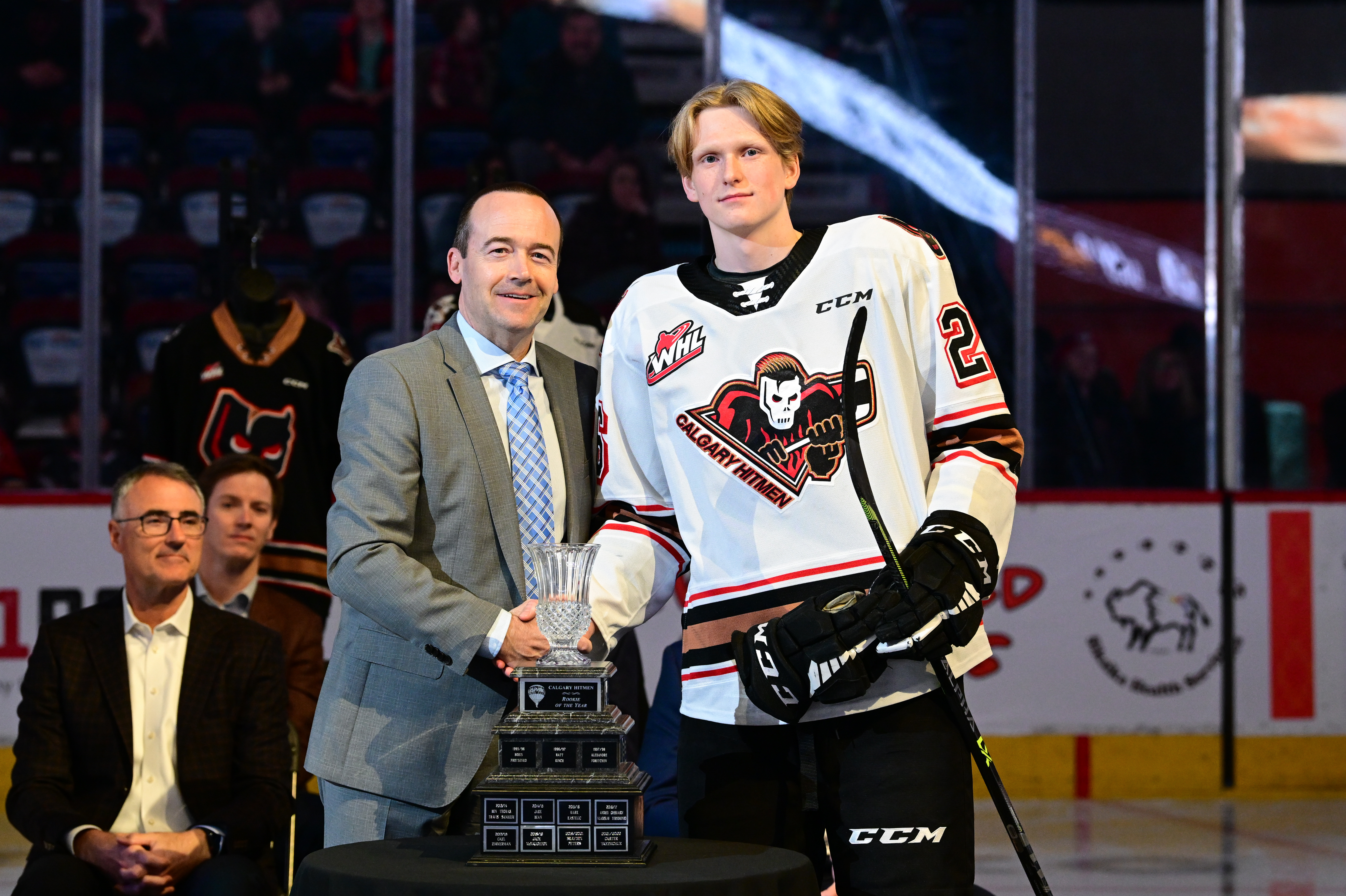 Rookie of the Year – Carter Yakemchuk

Originally selected by Calgary in the third round of the 2020 WHL Prospects Draft, Carter Yakemchuk made the team out of training camp as a 16 year old rookie. After an adjustment period early on in the season, he stepped up and become a solid piece on the backend. The defenceman tallied 4 goals, 8 assists for 12 points in his debut season with the Hitmen. A bright future lies ahead for this Yakemchuk as he will be an important part of the Hitmen’s future successes. 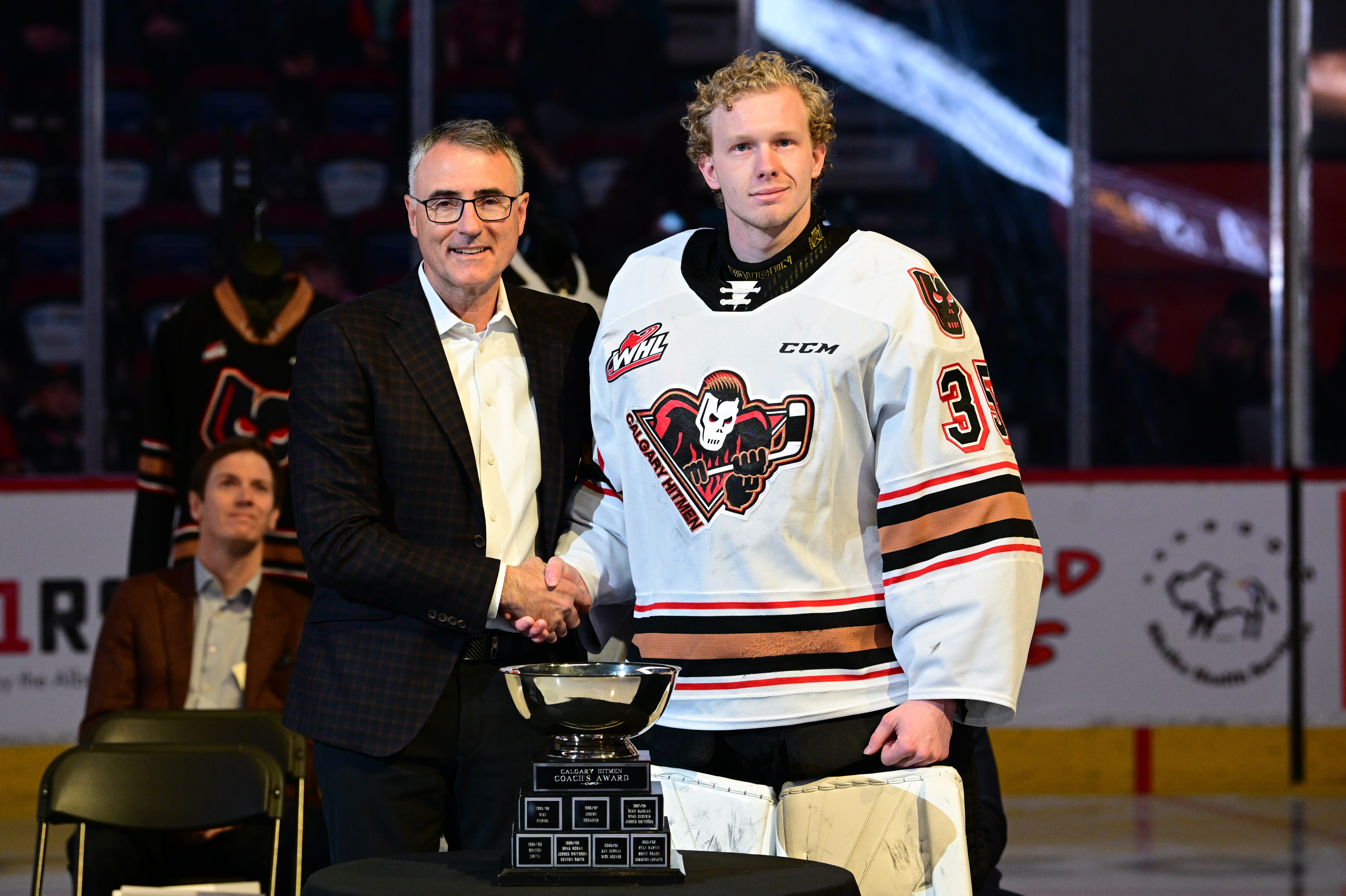 This award is based on leadership, attitude, effort and performance. Brayden Peters was a performer on the ice and has commitment to the game and his teammates that goes unmatched. Always reliable between the pipes, he was critical in a majority of the Hitmen wins, reaching the milestone of 5,000 career minutes this season. Peters has established himself as a veteran presence on the team and as one of the top goaltenders in the Western Hockey League. 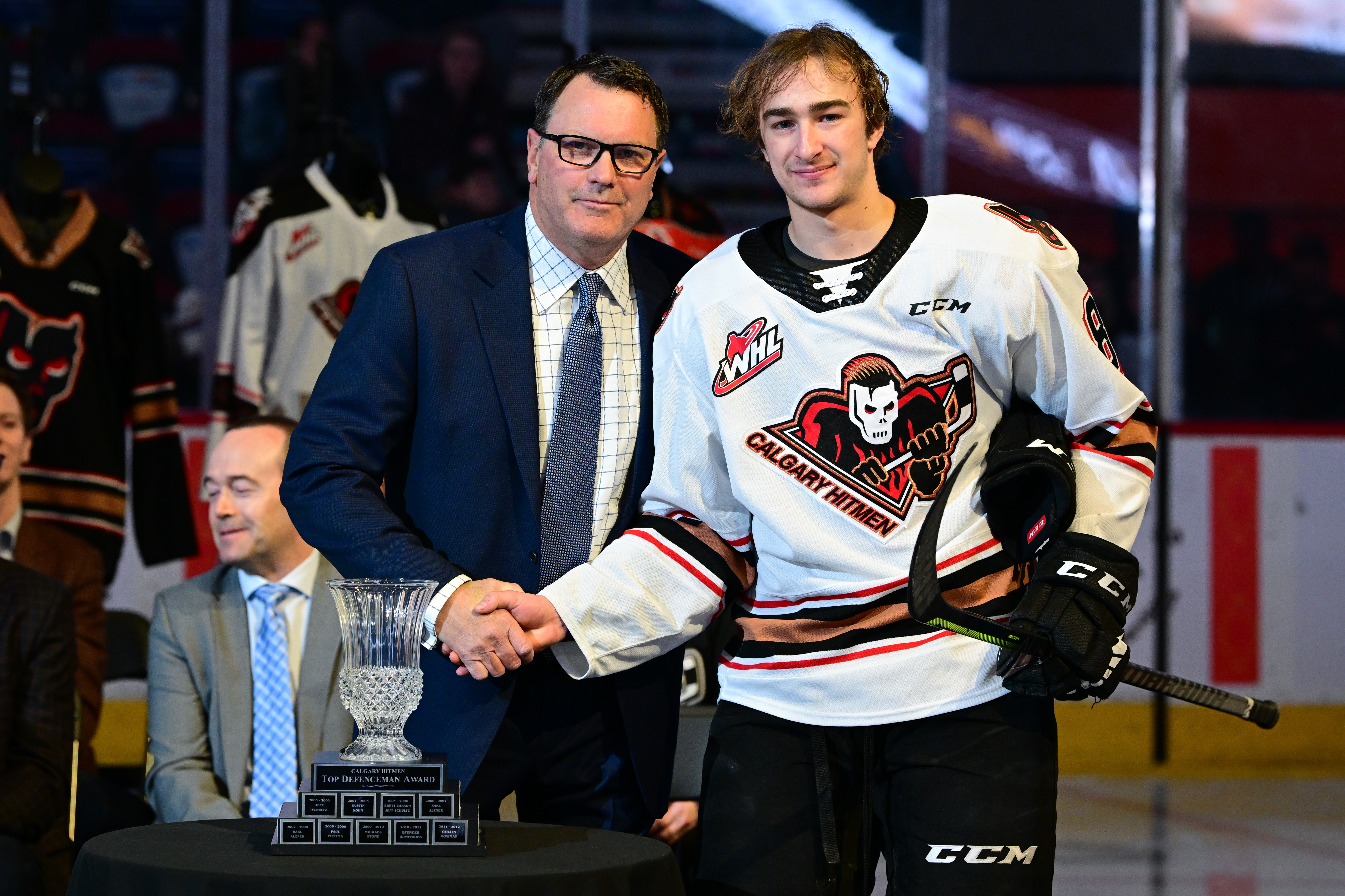 Previous recipients include Jake Bean, Michael Stone and Travis Sanheim. Grayden Sipemann is in his second season with the Hitmen after being drafted by the club in the first round in 2019. Logging important minutes in all key aspects of the game, he was a critical piece of the backend. Tallying 9 goals, 16 assists for 25 points in 64 games, this poised defender’s play earned him a spot on the NHL central scouting list for the 2022 NHL draft. 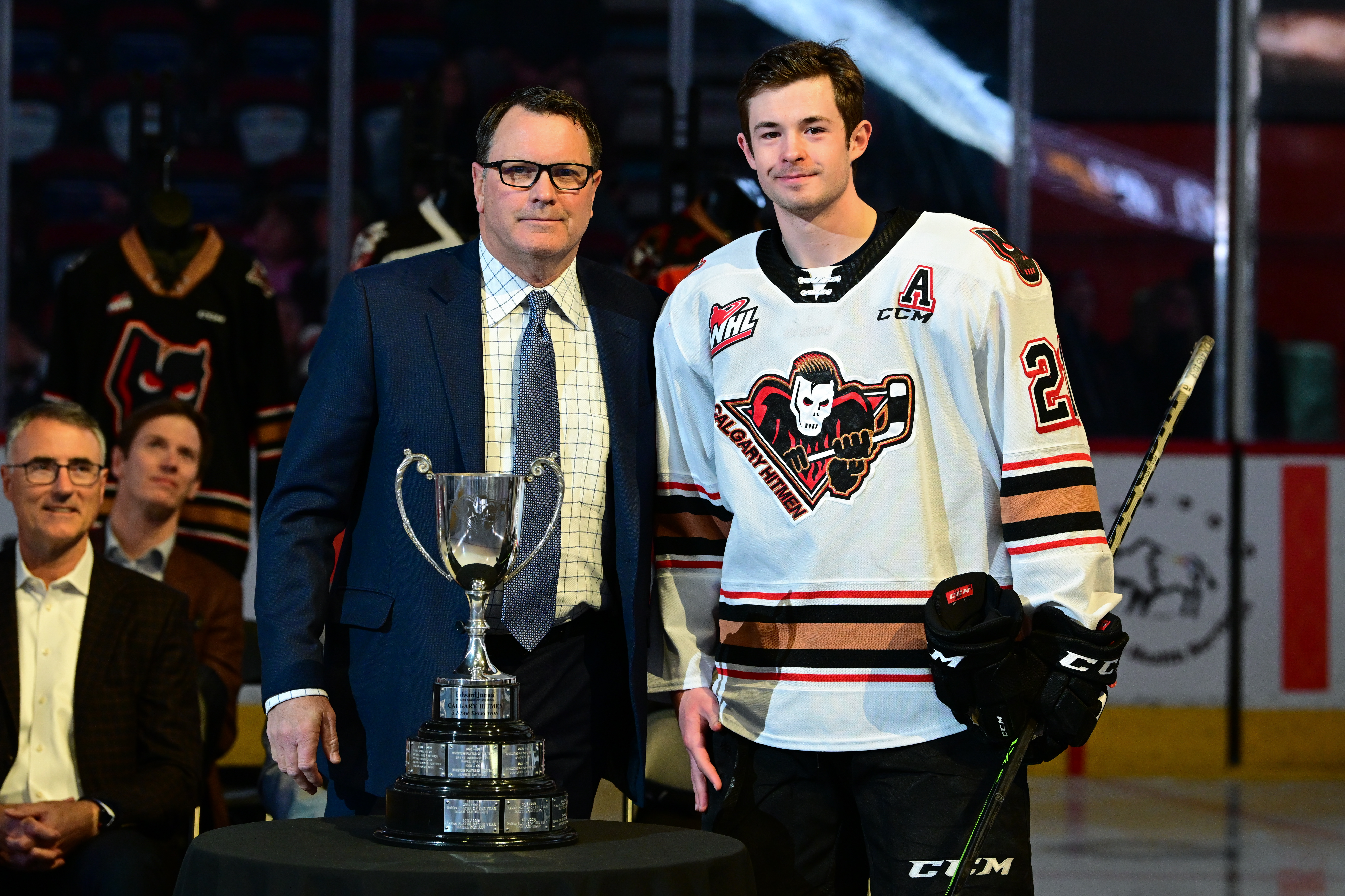 In his fourth season with the Hitmen, Riley Fiddler-Schultz winner recorded his season’s best in the WHL with a new career high in goals and assists recording 27 goals and 40 assists for 67 points. Season highlights include a first career Hat trick and an impressive 6 point game performance. The centerman lead the Hitmen offense , recording 19 multi-point games this season. 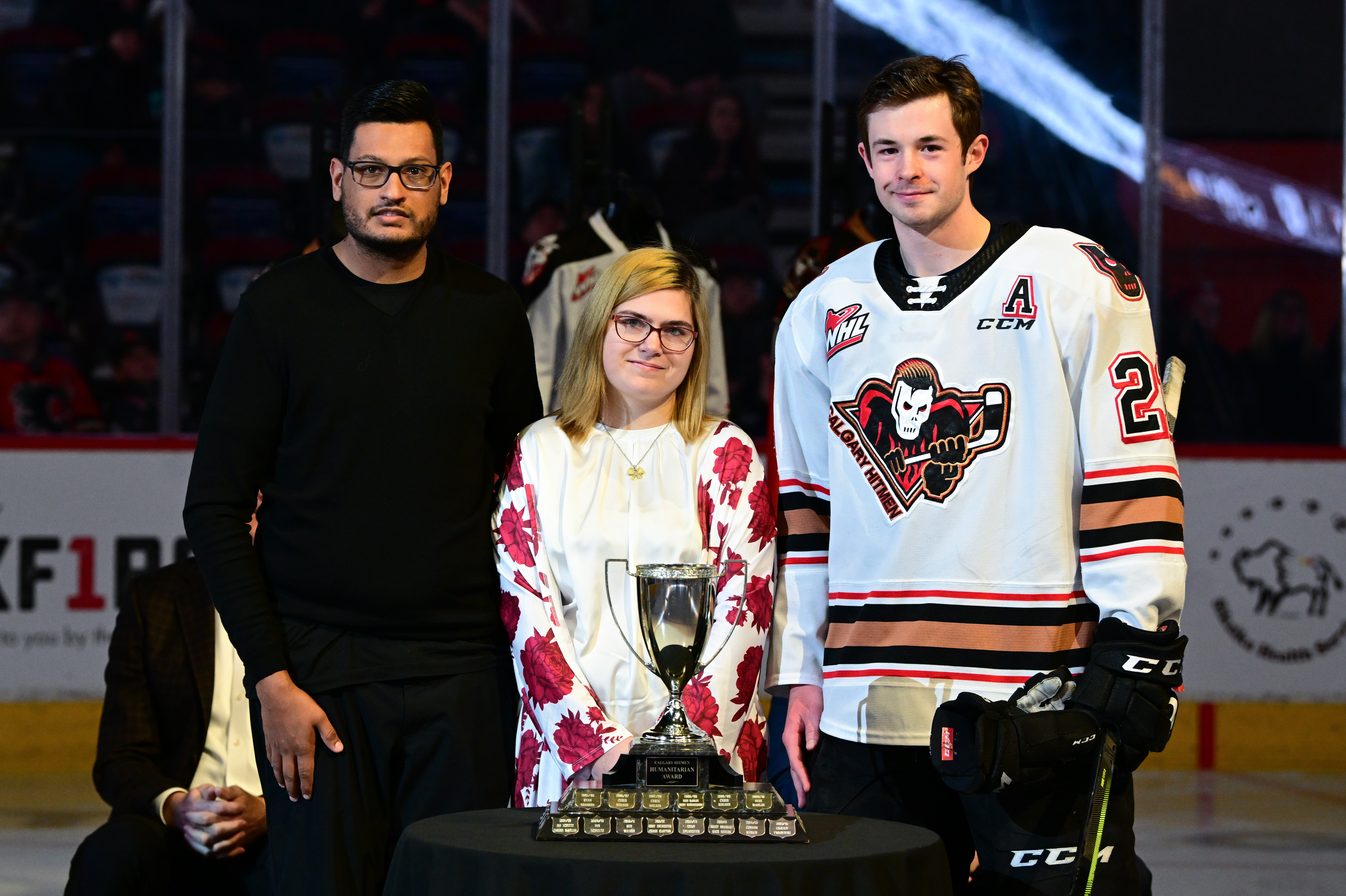 Riley Fiddler-Schultz was determined to figure out ways to give back despite challenges of Covid, which led to the success multiple community initiatives. This included, Fiddler-Schultz Fills-A-Ford which collected over 1600 pounds of food, and raised over $1000 for the Veterans food bank of Calgary. He also continued his program Fidd’s Friends, that brought kids from the Trellis society to Hitmen games where he was able to provide autographs and meet with them both over Zoom and in-person. This year’s recipient continues display selflessness and sets an example for current and future players.