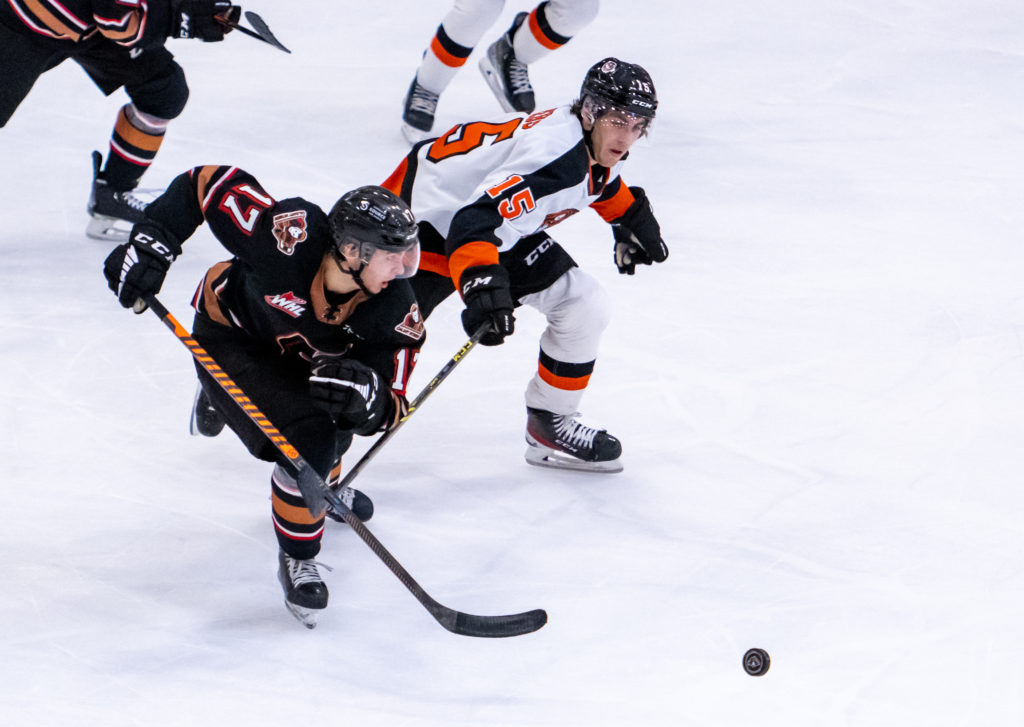 HITMEN HEADLINES: The Calgary Hitmen (22-15-3-1) play their second game in as many days tonight as they visit the Tigers (17-21-5-1) in Medicine Hat.  Game time is 7:00 p.m. at Co-op Place.  The Hitmen are coming off last night’s 4-2 home ice loss to Brandon where Quinn Mantei broke a 2-2 tie with 2:50 remaining.  Rookie forward London Hoilett notched both goals for the Hitmen who saw their losing streak reach three games.  The Tigers have been idle since Wednesday’s 5-4 shootout victory in Swift Current where Brayden Boehm notched the game winner in round six.  Medicine Hat has now won two in a row and three of their last four.

WHERE THEY STAND: The Hitmen are sixth in the Eastern Conference with 48 points and ninth overall in the WHL.  Medicine Hat is tied for ninth in the conference with 40 points, sitting four points out of a playoff spot.  Overall the Tigers are in a three-way tie for 14th place.

MEDICINE HAT: Tonight is the fourth of six regular season meetings between the Hitmen and Tigers. Calgary is 2-1 against their Trans-Canada rivals having outscored the Tigers by a combined 13-7. Riley Fiddler-Schultz (2g, 5a) leads Calgary with seven points in the season series while Sean Tschigerl (2g, 2a) is next with four.  Reid Andresen (1g, 2a) is the top performing Tiger with three points.  Calgary is 5-6-0-0 in their last 11 visits to Medicine Hat.  The two clubs won’t meet again until March 18 once again at Co-Op Place.

FAST FACTS: Riley Fiddler-Schultz needs just two face-off wins to reach 500 this season…Ethan Buenaventura’s 45 saves against Prince George on Wednesday was a season high for the 18-year-old and was the third time this season he has made 40 or more saves in a game…Only Oliver Tulk and Trey Patterson have played in all 41 games for the Hitmen this season.  Patterson is a team leading +20.

3-IN-3: This weekend’s trio of games marks the third time this season the Hitmen face this compacted part of their schedule.  They will do it on two more occasions, next weekend and again in March for a total of five times during the 2022-23 campaign.  So far Calgary has a combined record of 2-4-1-0 through the first seven games of compressed play.

SCOUTS EYE: NHL Central Scouting has released its Mid-Term Rankings for the 2023 NHL Draft.  Two Hitmen have made the list as Grayden Siepmann is number 138 among North American skaters while Oliver Tulk is 211.

WHL HONOUR: Hitmen Education Advisor Bernie Bajnok is this year’s recipient of the WHL Distinguished Service Award.  Bajnok who has spent more than 20 seasons with the franchise, joining the team in 2001, was honoured before Friday’s game against Brandon.  His roles with the club have also included Billet Coordinator and Assistant to the General Manager.

COUNTDOWN TO CONNOR: The Hitmen have opened second level seating at Scotiabank Saddledome for their Wednesday, Feb. 1 game against Connor Bedard and the Regna Pats.  Game time is 7:00 p.m.  Bedard is a two-time Team Canada World Junior Gold Medalist and the projected first overall pick for the 2023 NHL Draft.  Find all the ticket information at HitmenHockey.com.

UPCOMING GAMES: The Hitmen wrap up the weekend tomorrow, Sunday, Jan. 22 at home against Red Deer.  Game time is 4:00 p.m. at Scotiabank Saddledome for another Sunday Funday, presented by Brookfield Residential.  In addition to $2 sips and snacks specials all game long, look for concourse activities from TELUS Spark and a cast of characters outfitted by the Costume Shoppe.  There are also $6 Hitmen Happy Hour food and drink deals throughout the day and a post-game family skate.