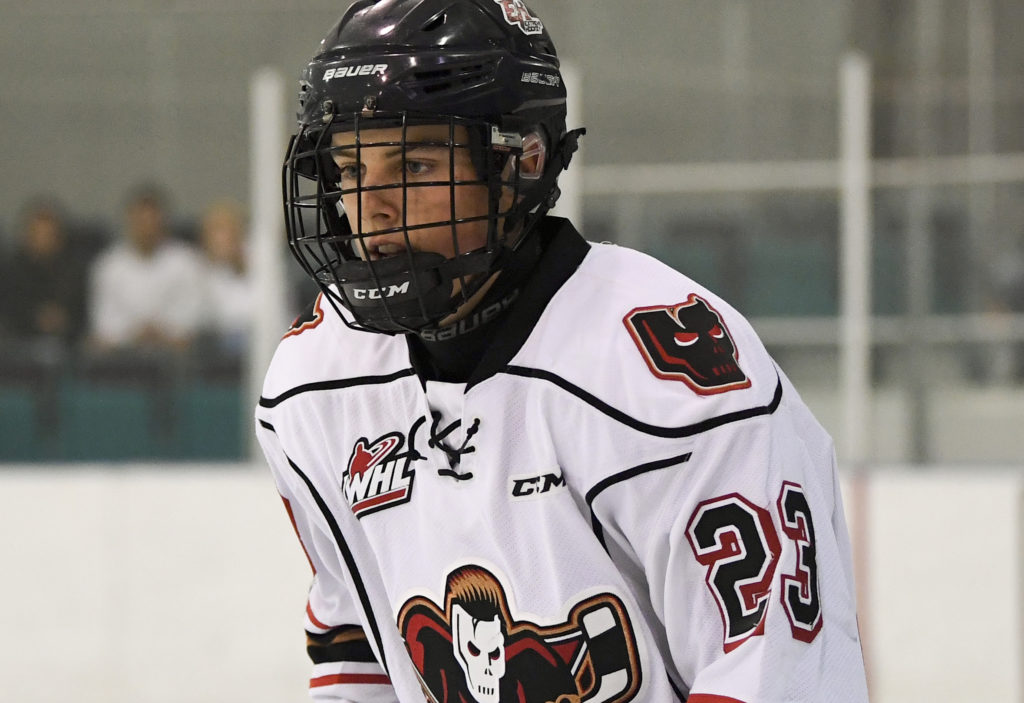 Everything earned, nothing given.

For as long as he can remember, Adam Kydd has had that mindset as he continued to climb the higher ranks in his hockey career.

All the hard work and perseverance has paid off for the 17-year-old as he signed a WHL Standard Player Agreement with the Hitmen following an impressive Training Camp.

“Going into it I was definitely nervous,” Kydd said. “It was my first WHL main camp and I wanted to do everything I could to get my name out there and most importantly, make the team.

“It’s been quite the journey to get to this point and it felt great to officially earn a roster spot. My parents were so proud of me and they’ve been so supportive through everything. There’s no way I would be here without them.”

Last season with the Regina Pat Canadians, Kydd registered 36 points (13G, 23A) in 44 tilts while also chipping in with five points (3G, 2A) in four playoff contests.

Not only can he fill up the scoresheet, but he also does all the little things that make a big difference.

“Lots of credit goes to our scouting staff for listing him and finding a player of his calibre,” head coach Steve Hamilton said. “I spoke to his coach from midget who is a huge fan of his and during camp I couldn’t help but notice his habits, how well he played and the small details in his game that he takes pride in.

“He’s an important find for us, an important revelation because if you want have a good team you need depth. With him joining our team, it helps strengthen our ’02 group which we were looking to do and he took charge in camp.”

His impressive play didn’t stop in camp as he followed it up in four pre-season games, leading the Hitmen in scoring with three points (1G, 2A) in his first taste of the league.

“There was a lot going on in my head during those games,” he said. “The WHL style is a lot faster compared to midget and played at a higher tempo so it was important to stay focused and not get overwhelmed. “I’ll never forget when I put on that jersey for the first time. It was surreal and will be a highlight in my career for years to come.

“This is a world class organization and I feel very fortunate to be a part of this special group.”

With the Hitmen getting set to open the 2019/20 campaign Saturday night in Swift Current, it’ll without a doubt be another highlight in his career to officially get things underway.

All the preparation has led to this moment, the opportunity he’s long been waiting for is here.

“Swift is only two and half hours away from my home so my parents and grandparents will be there which is exciting,” Kydd said. “I’m looking forward to it and the guys have been a huge help to get me ready for the season with advice like how much you have to come prepared every day, don’t take any shifts off, and be prepared to battle.”

Over 46,000 Students Take in TELUS BE BRAVE #EndBullying Event
3 days ago