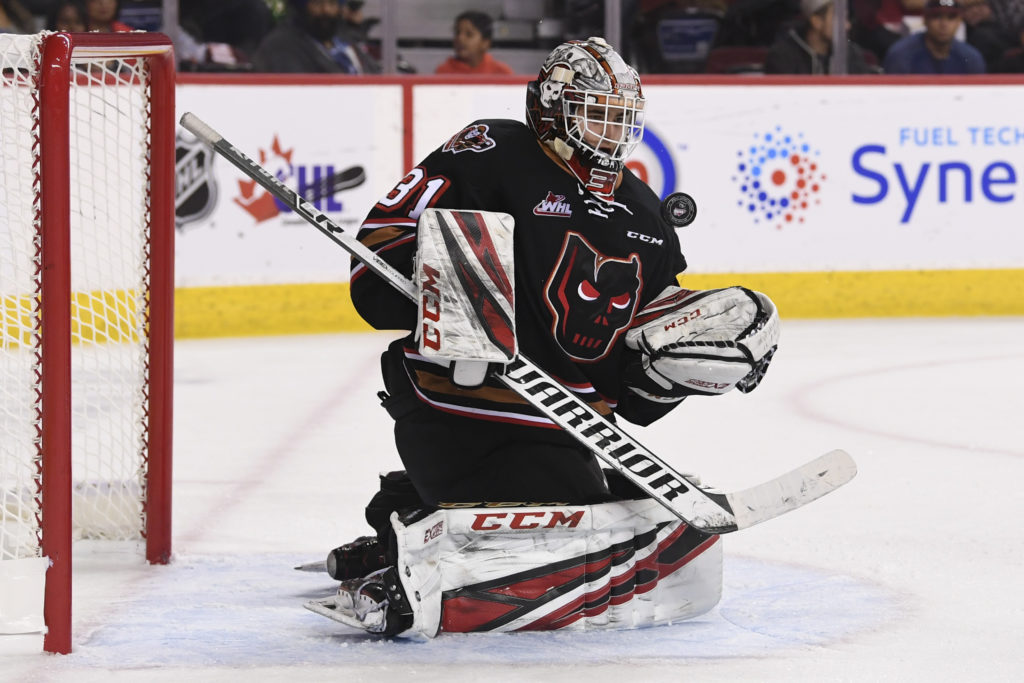 What a difference a year makes.

Just 12 months ago, Jack McNaughton was gearing up to attend the 2018 Hitmen Training Camp as a free-agent goaltender looking for an opportunity.

Not much was known about the hometown kid who was fresh off his second season with the Calgary Royals AAA midget club but now, one year later, that has all changed.

“At the time I was trying to get my name out there and get people to notice me,” he said. “Being a free-agent invite, I wanted to make the best impression that I could and showed that I belonged.

“It’s surreal to look back at the journey I’ve had to get to where I am today and it really shows that it doesn’t matter if you are drafted or not, if you put in the work everything will fall in place.”

McNaughton’s first year was highlighted by 25 regular-season wins – a league-high for WHL rookies – two shutouts, and four playoff wins. It was then all capped off with him being named the Hitmen RE/MAX Rookie of the Year.

He got his foot in the door, now comes a big sophomore season for the soon- to-be 18-year-old to follow it up.

“This summer was an important one for me to elevate my game,” he said. “I worked on my speed, agility and power because that’s what I needed to improve most. Working with Barbs (Hitmen goalie coach Jason LaBarbera) was huge for me in getting into the habitat of keeping my body upright and hands forward.

“Focusing on the small details goes a long way, especially as a goalie.”

Not only was the 2018-19 campaign filled with many memorable moments for McNaughton, but also many valuable lessons.

“The season is a marathon, not a sprint,” he said. “That was the biggest thing I learned in my rookie year and I am more confident in my game and know what my strengths are but at the same time not getting over confident.

“I am treating every day as if we were already in the regular season and playoffs. I’m taking it seriously and not letting up in practice so that I can start off running when the season officially gets underway.”

Heading into the season, there is plenty of buzz in the locker-room to build off the run they had last year.

A total of 17 players are set to return, with new faces added to strengthen the mix.

“It sort of was like the first day of school when we all got back together for camp,” he said. “It was only four months since we were all last together but it felt so much longer than that and it’s awesome to have everyone here again.

“We’re all pumped to get started and excited about the new additions to the team. We know we have the potential to do something special and build off what we started last year.”