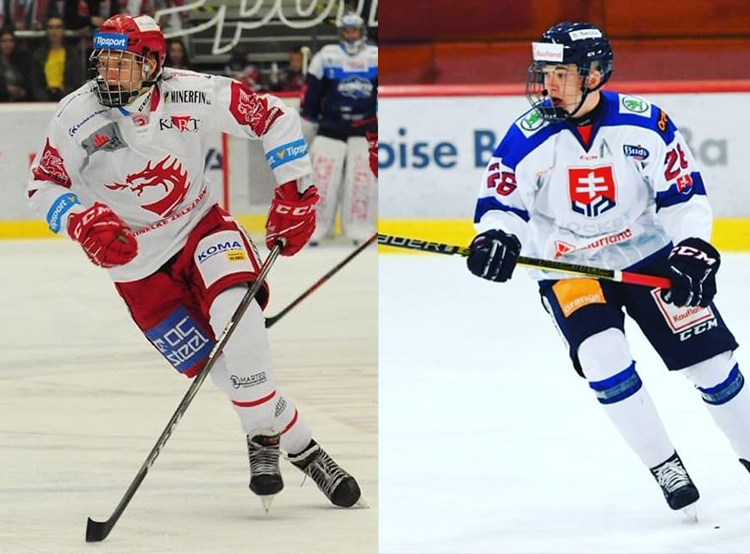 More pieces added to the puzzle.

For the first time since 2016 the Hitmen selected not just one but two players in the CHL Import Draft, in Czech forward Jonas Peterek 37th overall and Slovakian winger Samuel Krajc 97th.

It’s safe to say that it was an exciting day for the duo when they saw their name pop up on the draft board.

“I was so proud to be selected by the Hitmen,” Krajc said. “I’m very excited to head to Calgary to see the city, meet everyone in the organization and make a good impression during training camp.”

“I was really happy when I saw I was picked by Calgary,” Peterek said. “It’s a great organization and I’ve heard a lot of amazing things about the city, fans and team overall.”

The duo have an extensive background both with their respected clubs and on the international stage. What is even more impressive is that the 18-year-old Peterek and 17-year-old Krajc have both played above their age group in men’s leagues.

For Peterek, he’s represented the Czech Republic at the 2017 World U17 Hockey Challenge, the 2018 Hlinka Gretzky Cup and the 2019 U18 World Championship. Last season the forward was a point-a-game with Trinec of the junior league (2G, 7A) while finishing with 11 points (2G, 9A) in 41 tilts with Frydek-Mistek of the men’s league.

“I love to have the puck on my stick,” Peterek said. “I have good puck control and I see the ice well in setting up teammates for goals. Of course, I also love to score goals and work the point in the offensive zone on the powerplay.”

Krajc skated in the U18 World Championship last spring while also graduating this past season to the Slovakian U20 league. With HK Dulka Rencin U18, the right winger had 14 points in 14 games (8G, 6A) before graduating to the U20 league which saw him rack up 19 points (11G, 9A) in 27 tilts.

“I am a powerful player that likes to get in the corners and do whatever it takes to help the team win,” Krajc said. “I love to score goals whether it’s 5-on-5 or on the power play, I love to put the puck in the net and create scoring chances for myself and teammates.”

With returning defencemen Egor Zamula having inked a three-year contract with the Philadelphia Flyers last fall, the 19-year-old is eligible to be transferred to the NHL reserve list which allowed the Hitmen to make a second selection in the draft.

All three are expected to attend Hitmen Training Camp this fall, but Hitmen General Manager Jeff Chynoweth took full advantage of the draft by addressing the need of right-handed shots up front.

And, the selections of Peterek and Krajc might just be what the doctor ordered.

“Our goal heading into the draft was to add two forwards who have the ability to play the right side,” said Hitmen General Manager Jeff Chynoweth.  “Both Jonas and Samuel have skated on the international stage and have the potential to provide scoring depth to our returning group of forwards.”