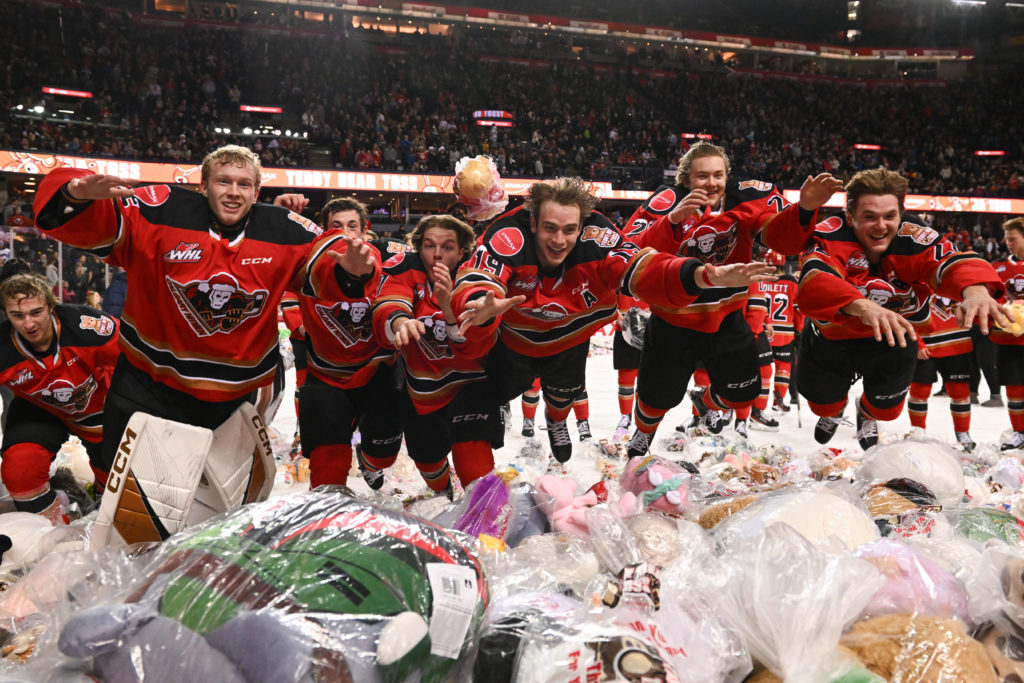 Calgary Hitmen forward London Hoilett found the back of the net 5:09 into the first period 2022 ENMAX Teddy Bear Toss, triggering a waterfall of 20,294 stuffed toys on Sunday afternoon at the Scotiabank Saddledome.

“For over 20 seasons our fans have backed this incredible cause and we would once again like to thank them for their tremendous support,” said Hitmen Assistant Manager of Business Operations Amy Bontorin. “The bears collected today will have a significant impact, and we can’t wait to deliver them to our local community.”

Over 65 local agencies, including the Alberta Children’s Hospital, Calgary Food Bank and Siksika Nation will share the stuffed toys this holiday season.

Since the inaugural 1995 toss, the Hitmen, with generous support from their partners and fans, have provided the community with 438,139 teddy bears.

Strong special teams for the Calgary Hitmen propelled them to a 5-3 win over the Moose Jaw Warriors. Atley Calvert opened up the scoring for Moose Jaw but it was followed up by London Hoilett’s Teddy Bear goal to tie the game. Brayden Yager would net one more before the end of the first. Zac Funk and Riley Fiddler-Schultz both found the back of net in the second period to take the lead. Calvert would score his second of the game to tie it heading into the final frame. Two power play goals from Jacob Wright and Carter Yakemchuk brought the lead to two goals, securing the win for Calgary.

Teddy bears collected will now be turned over to local charities on Monday, Dec. 5, beginning at 8:30 a.m. with distribution at the Scotiabank Saddledome at the TELUS Club entrance (access via 5th ST.). Hitmen players will assist the process. The team will then head over to various charities to deliver bears in person.