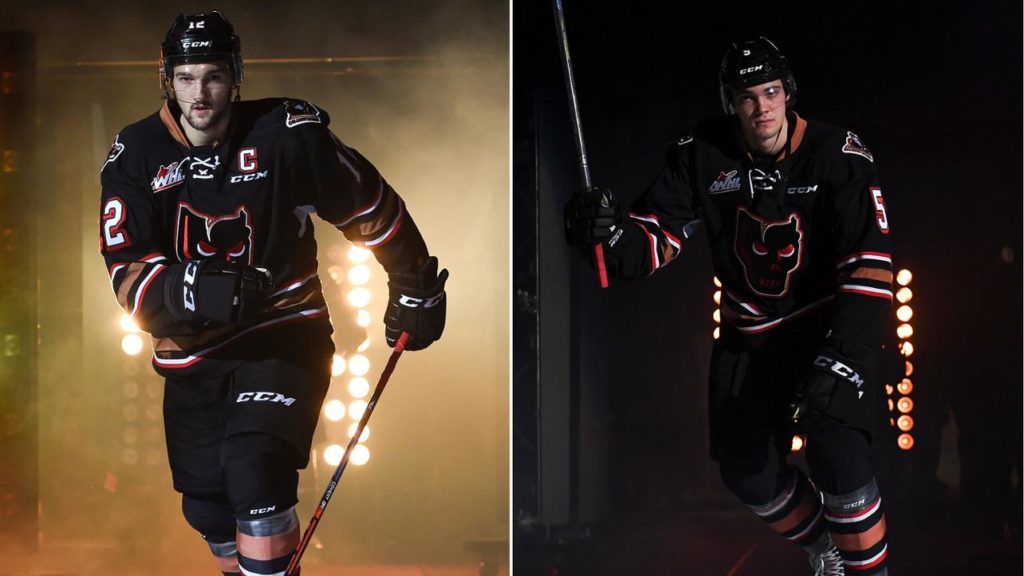 The wait is almost over.

One of the highlights of the off-season without question is the NHL Draft, the day the stars of tomorrow get that much closer to fulfilling their goal of making it to the NHL.

The two-day event gets underway on Friday June. 21 in Vancouver, B.C. and a pair of Hitmen players in Mark Kastelic and Jackson van de Leest will be waiting anxiously in hopes of hearing their name called after being listed to the final NHL Central Scouting Draft Rankings.

The duo have had very different and unique paths to this point in their careers, the Hitmen captain Kastelic is entering his third draft as a 19-year-old while the rearguard van de Leest is entering his first year of NHL Draft eligibility.

“Both have shown tremendous growth in their game and were huge factors for our club this past season,” Hitmen General Manager Jeff Chynoweth said. “It’s amazing to see how far they’ve come and how they will only get better.

“They are two great players and even better young men.”

Kastelic had a monster year, leading the Hitmen to the post-season with 47 goals and 30 assists to finish tied in the team-lead for points with 77. All were career highs for the captain while his 26 power play markers led all WHL skaters, and his work was recognized with a final ranking of 132 among North American skaters.

It was a breakout year offensively for the Arizona native, becoming a threat each time he stepped onto the ice and giving the opposition headaches.

“He had a great year and it was a product of how much work he put in,” Chynoweth said. “He gained a lot of attention from NHL scouts and it’s well deserved, he’s never given up and put in the extra effort which has paid off in a big way for him.

“It’s no surprise to see older players get drafted in the later rounds and from the NHL teams I’ve spoken to I really believe that he has a great chance of getting drafted. Obviously there’s no guarantee in which direction these teams will go but it’ll be a nice feather in his cap for a guy who has worked harder than anyone.”

On the ice, you know what you are getting from Kastelic, a big body who is hard on the forecheck, wins battles down low, plays a punishing game, puts the puck in the net and a hound in killing off penalties with his face-offs and defensive awareness.

But perhaps one of the biggest and overlooked factors in his game is his leadership, as he has been credited time and time again for being the glue and creating a tight-knit atmosphere in the dressing room.

“To have a captain that brings everyone together the way he does is unbelievable to see,” Hitmen head coach Steve Hamilton said. “He’s doing everything he can to lead by example and maintains a standard on how he carries himself. He’s just a true pleasure to coach and a special breed.

“Any dressing room would be thrilled and lucky to have a Mark Kastelic on their team and we’re proud to have him be ours.”

In van de Leest, the defender just recently celebrated his 18th birthday and what better way to celebrate than to be see his childhood dream of being drafted come true.

The former first-round pick in the 2016 WHL Bantam Draft is a towering presence at 6-foot-6, and his strong, reliable defensive play along with his career-high in points with 21 (1G, 20A) has him ranked 138th among North American Skaters.

“He’s just scratching the surface and I enjoy working with him because he’s a very smart young man,” Hamilton said. “He understands the game well and he’s not satisfied with just being here, he wants to contribute and be leader.

“He has so many positive traits to him and it’s exciting because you always forgot how young he is. He thinks and plays the game with such maturity and really rose to the challenges when we used him in key situations and never backed down.”

It hasn’t been an easy journey to this point for the Kelowna product, as last season saw his rookie year end sooner than he had hoped when he suffered and missed the second-half of the season. But with his determination, van de Leest came back to the roster for the 2018-19 season and didn’t miss a beat while elevating his game to new heights.

They sky’s the limit, literally, for the behemoth on the blueline.

“When he got his game going everyone took notice,” Chynoweth said. “He’s a solid stay at home defenceman that makes a good first pass, and will make you pay with his physical game. That’s a big body and you have to be aware of him at all times because you combine his size, reach and his mind, that’s a tough matchup for anyone.

“He’s going to be a big part of our team this upcoming season and with his work ethic, he’s going to go above and beyond expectations because that is the person he is.”