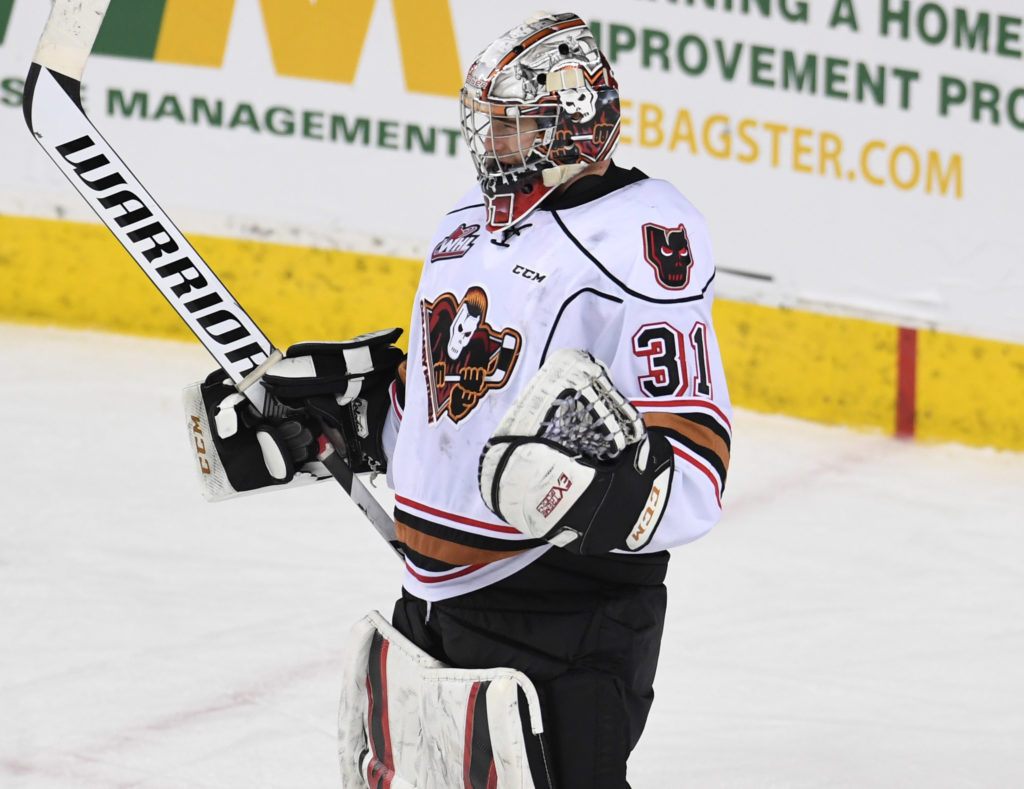 Even after 30 games into his Hitmen career, rookie goaltender Jack McNaughton still gets goose bumps pulling the jersey over his head and playing in the Scotiabank Saddledome.

It’s a feeling that will never get old for the hometown kid.

“If you would’ve told me that I would skate on Saddledome ice I wouldn’t believe it,” he said. “Honestly, if I was told I would be playing for the Hitmen I wouldn’t have believed it either. I’m so happy to be here.

“It’s still crazy to even just put on the practice jersey. Being here is so surreal and something I’ll never forget.”

The 17-year-old has had quite the stretch with 19 consecutive starts dating back to Nov. 24, and has risen to the occasion.

With an 11-6-1-1 record in that span, the WHL freshman has been a large reason why the Hitmen have been able to climb up into a playoff spot.

He’s seen a lot of pucks, and that’s just how he likes it.

“It’s been a blast for me but it’s also nice to get the experience early on now,” McNaughton said. “It’ll help later on this season and in future years to come knowing that the pressure isn’t there as much.

“The more shots the merrier, even in games. I feel like the more I get, the more zoned in I am. It makes it easier to always be in the moment all the time opposed to seeing a few shots here and there.”

After playing midget last season with the Calgary Royals the WHL milestones have followed including his first career shutout, a 19 save performance, on Nov. 16 in Cranbrook against the Kootenay ICE.

He was then able to follow it up with another perfect game this time making 25 stops on home ice just over a month later against the Vancouver Giants.

“I am a really superstitious guy. As soon as I hear anyone say the S word I leave, I can’t be around them and I’ll knock on wood right after,” he said. “I can’t stand when people say that word. It hurts my ears hearing it.”

“Both of the shutouts were really special to me, getting it in front of the hometown crowd and to be able to accomplish it in the arena that I spent so much time growing up made it sweeter. I’ve learned from the past to not think about it because I’ve jinxed myself quite a few times. I looked up at the clock with five minutes left and didn’t want to think about it but as soon as the buzzer went I felt relieved and excited.”

He may be a rookie goaltender but he definitely doesn’t look like one. McNaughton has shown the ability to stay poised and bounce back when needed.

Characteristics that he has taken pride in for as long as he can remember.

“It’s all been about staying patient and trusting the course,” he said. “Some games may not go the way you like but you have to forget about it and trust that everything will work out. If it’s a bad game, I learn from the mistakes I made and not dwell on the past. You can’t change what happened but you can work to control what will happen next and I want to go out there and help the team get wins on a consistent basis.

“I’ve come a long way from the silly mistakes I’ve made earlier in the year. Mentally I’ve grown stronger and worked through the rough patches and I want to continue to be better every day.”