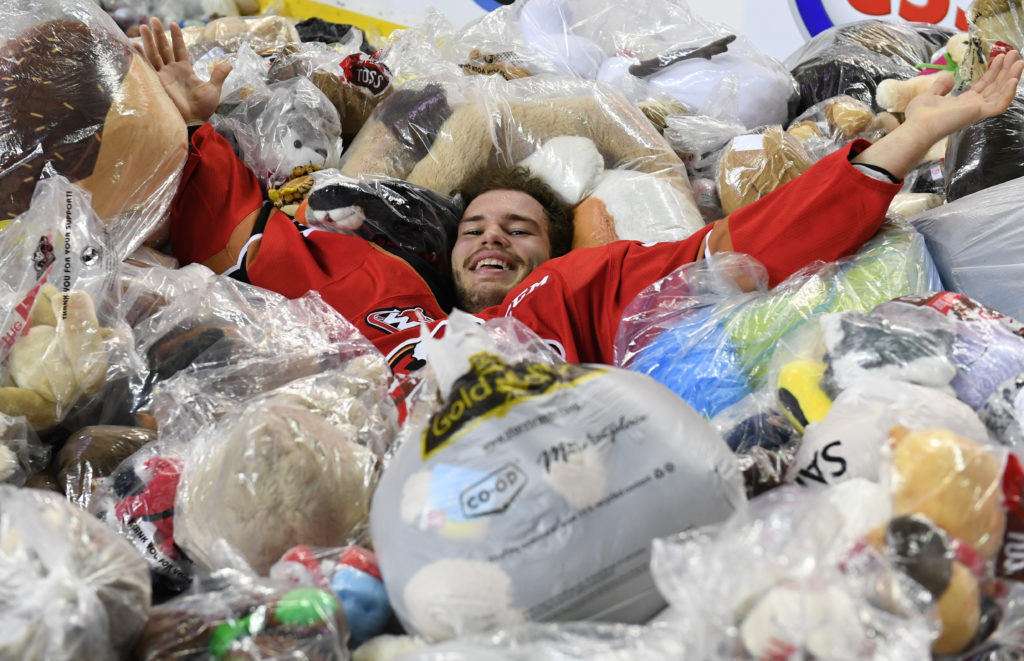 The world-famous Teddy Bear Toss is back for another year, now brought to you by Enmax.

And this time around, it should be electric!

The Hitmen will be looking to reclaim the world record they lost to the Hershey Bears last season.

Hershey set a new mark with 34,798 bears raining down in a single game. The Hitmen set a franchise record last season of 29,635, but ultimately it wasn’t enough to top Hershey.

“I didn’t like it that Hershey took the record, I didn’t like they made a big deal of it, we want that back,” said Rob Kerr, the Hitmen’s Assistant Manager of Business Operations. “We want our fans – the best fans out there – to come and help us get the record back where it belongs, here in Calgary.”

That opportunity will come on Sunday, Dec. 1, when the Hitmen will host the Red Deer Rebels at 4 p.m. at the Scotiabank Saddledome.

Fans are asked to bring a bear or two and throw them onto the ice when the Hitmen score their first goal against their provincial rivals.

“We work with some incredible community partners, almost 100 groups will be contacted in the lead up to see what they need,” Kerr explained. “It’s such an important thing for the community.”

Tickets are available on ticketmaster.ca or at the Saddledome on Oct. 15 at 10 a.m.

“The competitor in me wants absolutely to destroy Hershey and leave them in the dust, but we also know there is other teams who will be gunning for it,” said Kerr. “We understand the Vancouver Giants, in our own league, will be looking to do it.

“They’re playing with the intent of breaking Hershey’s record, so Hershey is one thing and they’re great and awesome and it smells like chocolate but to me Vancouver is now the villain in this.

“I don’t want anyone in my league taking this record. There is 25 years of history here, we have a lot of pride in it.”

Since 1995, the Hitmen have collected a mind blowing 377,583 bears for children at the Alberta Children’s Hospital and within the community