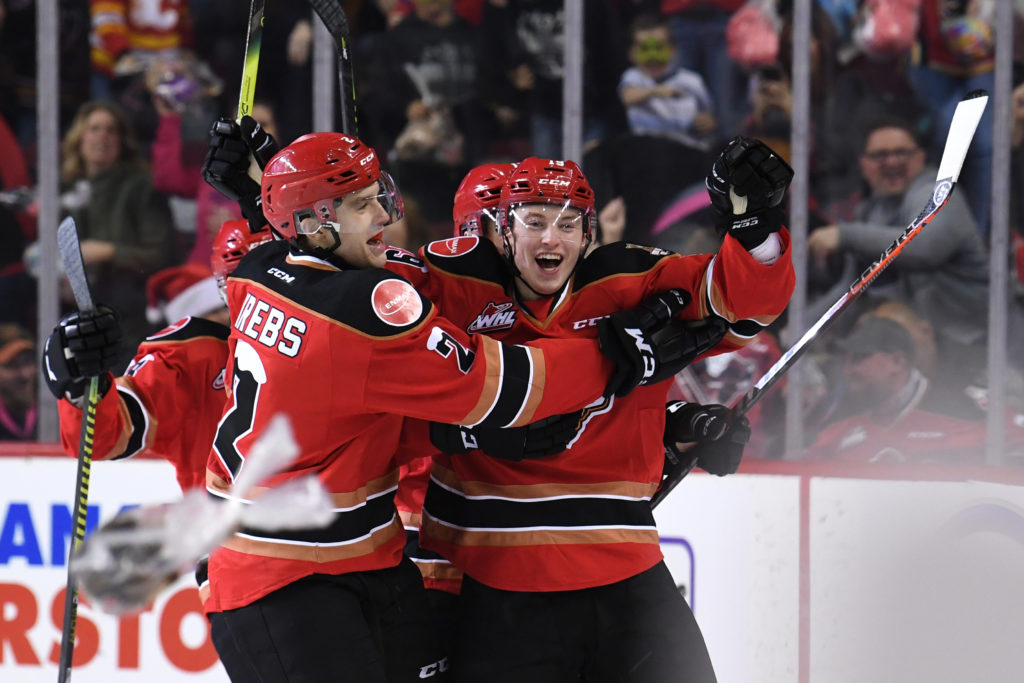 Once again, the Enmax Teddy Bear Toss was a huge success with a grand total of 25,025 teddy bears tossed out bringing the franchise total to 402,608 bears tossed since the tradition started in 1995.

Carson Focht scored 1:34 into the game to set off the teddy avalanche, deflecting a Jackson van de Leest point shot into the back of the net for the famous goal.

“It was a really special goal,” Focht said. “We talked a lot about it and our line joked about getting it on the first shift before the game. It’s great to be a part of such a special cause and great to share this moment with my teammates.

“It was an unbelievable moment.”

Over 70 local charities will benefit from the stuffed animals collected with members of the team set to distribute them tomorrow morning which includes a visit to the Alberta Children’s Hospital to hand deliver the stuffed animals.

In terms of the game after the goal, things didn’t go as planned as the Hitmen fell just short in overtime falling 3-2 to the Red Deer Rebels to drop to 14-7-3-1 on the season.

Riley Stotts provided the other marker while Jack McNaughton made 22 saves in net for the home side as the Hitmen saw a 2-0 lead vanish for the second night in a row.

Joel Sexsmith, Cameron Hausinger and Josh Tarzwell scored the markers for Red Deer, with Tarzwell scoring the overtime winner at 3:48 of the extra session. Goaltender Byron Fancy stopped 29 shots to backstop the Rebels.

“It’s a busy time with a three-in-three with the travel in between but we didn’t play very well today,” head coach Steve Hamilton said. “The support from the Calgary fans was unbelievable and we appreciate them coming out for a great cause.”

Although the result wasn’t a favourable one, the event overall was extraordinary to witness for players and fans.

And, at the end of the day it’s all about what the event is tied to.

“It’s really special to give back especially around the holidays,” Focht said. “Going to the hospital spending time with the kids there is really rewarding and we’re all looking forward to it.

“They deserve it and seeing the smiles on their faces is something that words can’t really describe.”

It was a game that was circled on the calendar for quite some time and with the support from the 17,346 fans in attendance, another memorable toss.

“We were pumped to come to the rink with how special the event is,” Mark Kastelic said. “It’s for a great cause and fun to play in front of that many fans, it makes it feel like an NHL game.

“It’s one of the best days of the year going to the Children’s Hospital to hand out bears and when you see the kids, it warms your heart.”