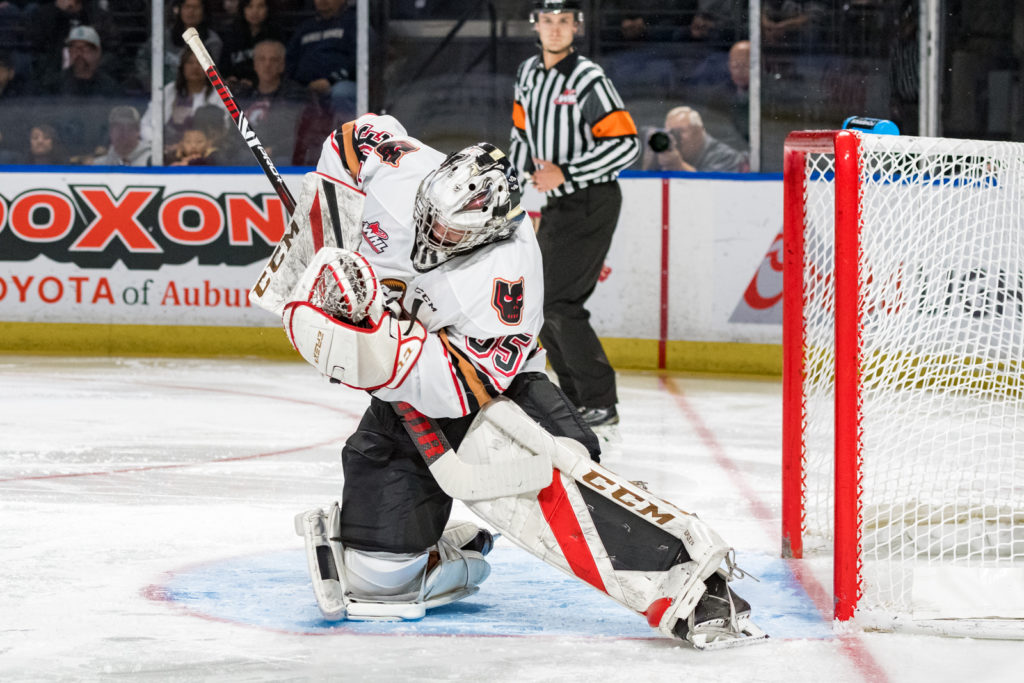 HITMEN HEADLINES: The Calgary Hitmen (9-4-1-1) make stop number two on their U.S. Division road trip today with a date in Everett against the Silvertips (12-5-0-0).  Game time is 5:05 p.m. MT at Angel of the Winds Arena.  The Hitmen stretched their season high winning streak to six games with a 2-1 overtime win last night in Kent against the Seattle Thunderbirds.  Oliver Tulk scored on a wraparound 1:57 into extra time to push the Hitmen into the win column.  Sean Tschigerl, on a first period breakaway, also lit the lamp for the visitors while Brayden Peters was outstanding making 32 saves in goal.  The penalty kill was instrumental killing all eight Seattle chances.  Everett, winners of four straight, has been off since last Friday’s 4-3 victory in Tri-City.  The Hitmen are tied for sixth in the Eastern Conference with Regina at 20 points while Everett is third in the West at 24 points.

EVERETT: This is the first and only meeting of the 2022-23 regular season between the Hitmen and Silvertips. It’s also their first encounter since Dec. 8, 2019 when Everett skated to a 6-3 victory, erasing a 3-1 second period deficit. Jake Christiansen led the charge with two goals and an assist while Riley Stotts (2g) and Egor Zamula (2a) both had multi-point efforts for Calgary.  The last time the Hitmen played in Everett was Nov. 20, 2018 when Tips goaltender Dustin Wolf made 26 saves for the shutout in a 4-0 victory.  Overall Calgary has lost their last four meetings with Everett with their last triumph over the ‘Tips back on Nov. 21, 2015 at home by a score of 4-3 in a shootout.  Radel Fazleev netted game winner.  Trailing 3-1 mid-way through the third period, the Hitmen rallied to force overtime when Jordy Stallard and Colby Harmsworth scored goals 53 seconds apart.  Carsen Twarynski also found the back of the net for Calgary while Micheal Zipp added two assists.

INSIDE THE STREAK: Calgary enters today having won six games in a row, their longest such streak since late in the 2018-19 season when the club also rattled off six straight victories.  During their current run they have outscored the opposition by a combined 26-8.  You have to go back to the 2015-16 campaign for the last time Calgary posted seven straight wins when they accomplished that feat from Nov. 13-25 in 2015.  Jake Bean, Jakob Stukel, Colby Harmsworth, Micheal Zipp and Tyler Mrkonjic (2X’s) were among the players who scored game winners during that run while Cody Porter posted six of the seven wins in goal.

STREAKS: Oliver Tulk (3g, 1a) is on a three-game point streak.  Sean Tschigerl (2g, 1a) has points in back-to-back games.  Brayden Peters has won his last five starts in goal.

WE MEET AGAIN: Today’s game marks the return of Hitmen forward Jacob Wright to Everett.  The 20-year-old appeared in 141 games for the Silvertips dating back to the 2019-20 season, recording 34 goals and 71 points.  He was then dealt to Calgary earlier this season.  The Sept. 30 swap saw the Hitmen send 19-year-old forward Steel Quiring and a pair of picks (6th Rd 2023 + 4th Rd 2024) in the WHL Prospects Draft to the Silvertips in exchange for Wright.

QUICK TURNAROUND: Today marks just the fourth time this season the Hitmen will have played on back-to-back days.  They are a combined 1-1-0-1 on night number two.

FAST FACTS: As a team, Calgary is 54.5% in the face-off circle with Matteo Danis posting a team best 58.5%…Brayden Peters has the third best goals against average in the league at 1.98 and the second best save percentage at .934.

KILLING TIME: Calgary’s penalty kill is number one in the WHL at 90.1%. It has killed 20 straight shorthanded situations and 33 of the last 34.

PROSPECT WATCH: Allen Sherpa, Calgary’s eighth-round pick in the 2021 WHL Prospects Draft, is playing in the Alberta Elite Hockey League with the U18 AAA Calgary Royals.  In 12 games the 16-year-old forward is third in team scoring with 12 points (6g, 6a).

UPCOMING GAMES: Calgary will enjoy a one-day break before facing the Winterhawks in Portland on Tues. Nov. 15.  The road trip then heads to Tri-City (Fri. Nov. 18) and Spokane (Sat. Nov. 19).  The next Hitmen home game is not until Friday, Nov. 25 when they welcome the Prince Albert Raiders to Scotiabank Saddledome for a 7:00 p.m. start.