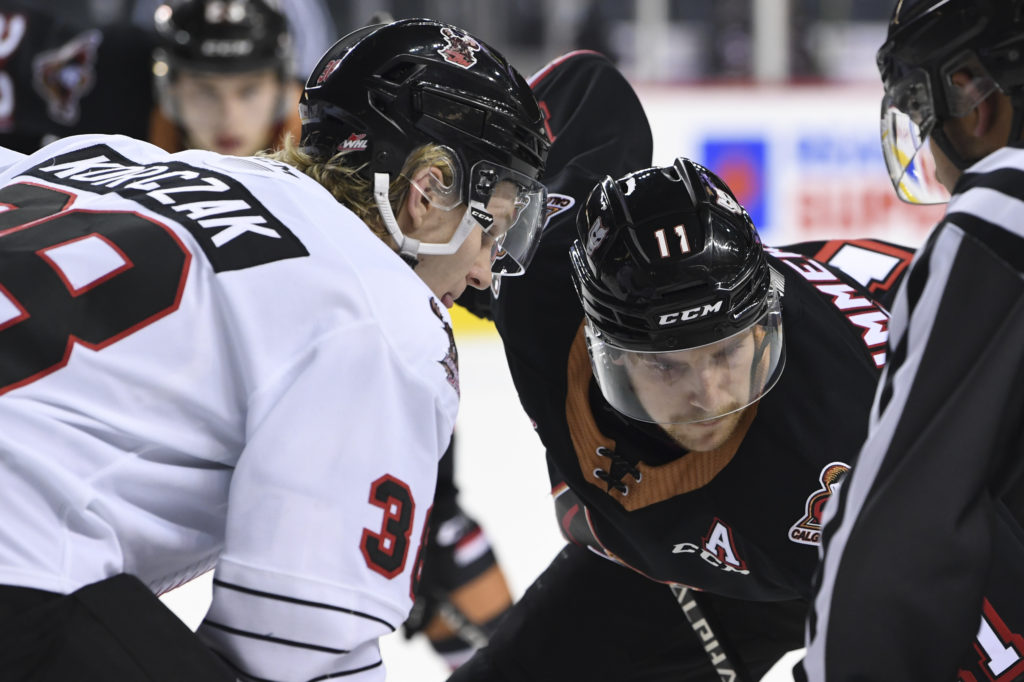 HITMEN HEADLINES: The Calgary Hitmen (15-12-4-2) make their second stop on a three-game Saskatchewan road trip tonight in Moose Jaw against the Warriors (17-16-3-1).  Game time is 6:00 p.m. MT at Mosaic Place.  Calgary is 3-0-1 in their last four outings and coming off last night’s 4-3 shootout win in Regina.  Brayden Peters was terrific turning aside 22 first period shots en route to a 41 save performance.  Sean Tschigerl scored once in regulation and the shootout winner while Riley Fiddler-Schultz added a goal and an assist.  Steel Quiring, in his Hitmen debut, also found the back of the net for the visitors.  The Hitmen are seventh in the Eastern Conference with 36 points while the Warriors are sixth with 38.  Under the WHL playoff format, the top eight teams qualify for the post season.

LET’S GO: Today is Calgary’s fourth games in five days, a run that will also see the club play six games in nine days ending Sunday at home to the Warriors.

VS. MOOSE JAW: Tonight is the second of six regular season meetings with Moose Jaw. Calgary leads the season series 1-0 thanks to a 7-1 home ice victory in November. Sean Tschigerl scored twice for the Hitmen while David Adaszynski and Brandon Whynott both notched a goal and an assist.  This is Calgary’s first visit to Moose Jaw since Nov. 23, 2019.  Jett Woo notched a goal and an assist while Egor Zamula picked up a pair of assists in a 4-1 Hitmen win.  It’s been so long that only four Hitmen from the current roster played that night in Blake Allan, Zac Funk, Sean Tschigerl and Brayden Peters.  The two clubs will meet again in just four days on Sunday in Calgary.

STREAKS: Riley Fiddler-Schultz (4g, 4a) is on a four-game point streak while Zac Funk (1g, 2a) has points in back-to-back games.  Brayden Peters has won his last three starts posting a goals against average of 1.95 and a .936 save percentage.  Grayden Siepmann (3a) saw his two-game point streak end last night in Regina.

LEADERSHIP GROUP: Cael Zimmerman is the new Hitmen captain, replacing Jackson van de Leest who was traded to Red Deer last week.  Zimmerman had served as an alternate this season and has played his entire five-year career in Calgary.  Fellow overage forward Blake Allan joins the leadership group as an ‘A’ alongside Riley Fiddler-Schultz, Tyson Galloway and Sean Tschigerl.

ON THE ROAD AGAIN: Tonight is the second in a stretch that sees Calgary play eight of their next 12 away from the ‘Dome.

PLAYER SPOTLIGHT: Forward Oliver Tulk is in his first season in the Western Hockey League.  The 16-year-old was Calgary’s first-round pick, 12th overall, in the 2020 WHL Prospects Draft.  The Gibsons, BC product has 10 points (6g, 4a) in 30 games this season.  Tulk also has 35 shots on goals and a faceoff winning percentage of 53.1%.

FAST FACTS: Today is Game 34 of the regular season for the Hitmen, marking the midway point of their 68 game 2021-22 campaign…Calgary has fired 31 or more shots on goal in seven consecutive games…The Hitmen are 8-3-4-2 in their last 17 games…Riley Fiddler-Schultz is tied for 10th in the WHL scoring race Red Deer’s Ben King at 44 points.  He is also second in shots on goal with 153 and tied for third in game winning goals with five…Sean Tschigerl tops the league in shorthanded markers with five…Blake Stevenson is tied for seventh in the WHL in power play assists with 14…Brayden Peters is fourth in the WHL in minutes played at 1,618 and saves with 762.  His 14 wins are tied for sixth…Calgary is 7-1-1-1 against the East Division…Zac Funk has at least one shot on goal in all 32 of his games this season…The Hitmen power play has scored in five of its last seven games…The Hitmen are 5-7-2-1 on the road this season while Moose Jaw is 12-6-1-1 at home.

UPCOMING GAMES: Calgary’s road trip concludes in Swift Current on Friday, Jan. 21.  The Hitmen will then return home to host Moose Jaw on Sunday, Jan. 23 in a 4:00 p.m. start at Scotiabank Saddledome.