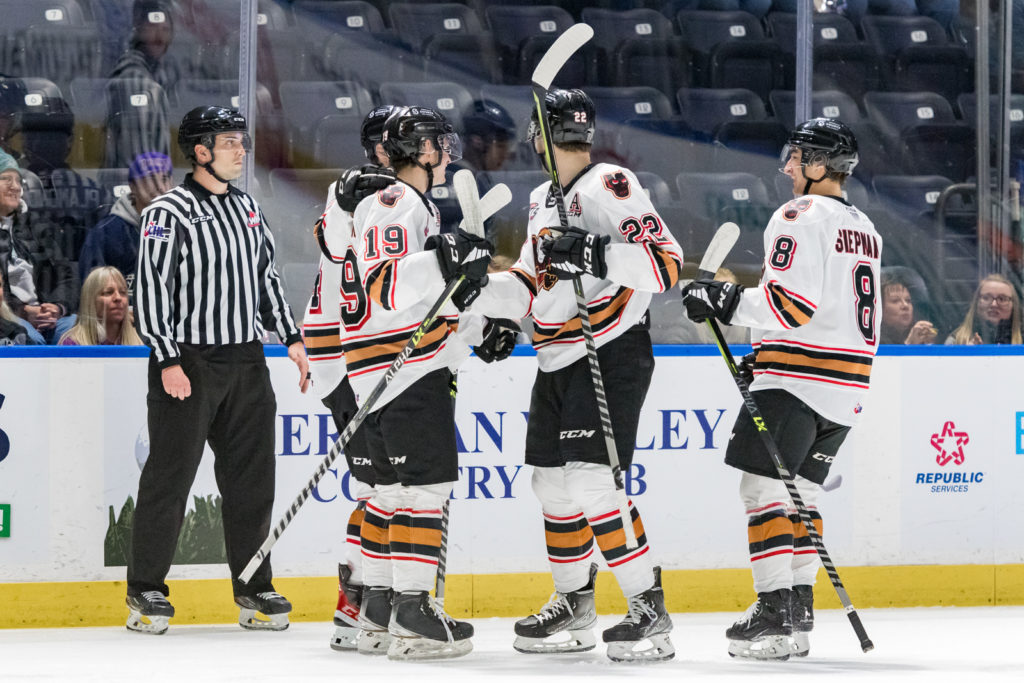 HITMEN HEADLINES: The Calgary Hitmen (10-4-1-1) play the third game on their U.S. Division road trip tonight with a stop in Portland against the Winterhawks (13-1-1-1).  Game time is 8:00 p.m. MT at Veterans Memorial Coliseum.  The Hitmen are 2-0 on the swing and coming off Sunday’s 6-3 victory in Everett.  Zac Funk turned in a first-star performance with two goals and an assist as Calgary erased a 3-2 third period deficit.  Billal Noori (1g, 1a), Tyson Galloway (1g, 1a) and Carter Yakemchuk (2a) also posted multi-point games for the Hitmen.  Portland, winners of five in a row, has been off since Saturday’s 7-4 win in Victoria.  Forward Aidan Litke notched a career high four points with a goal and three assists.  The Hitmen are tied with Moose Jaw for fourth in the Eastern Conference at 22 points while the Winterhawks top the West with 28 points.

PORTLAND: This is the first and only meeting of the 2022-23 regular season between the Hitmen and Winterhawks. It’s also their first encounter since Oct. 6, 2019 when Calgary skated to a 5-2 win at the ‘Dome. Egor Zamula, Jett Woo, Tye Carriere and Orca Wiesblatt all notched a goal and an assist in the victory.  The last time the Hitmen played in Portland was Nov. 21, 2018 when Calgary posted a 3-2 victory.  Jake Kryski, James Malm and Riley Stotts provided the goals while Carson Focht tallied a game leading two points with a pair of assists.

INSIDE THE STREAK: Calgary enters today having won seven games in a row, their longest such streak since November of 2015 when the club also rattled off seven straight victories.  During their current run they have outscored the opposition by a combined 32-11.  You have to go back to the 2014-15 campaign for the last time Calgary posted eight straight wins when they rattled off nine straight victories from Jan. 18 to Feb. 11, 2015.  Adam Tambellini, Radel Fazleev, Elliott Peterson (2X’s), Micheal Zipp (2x’s), Connor Rankin and Chase Lang were among the players who scored game winners during that run while Mack Shields and Brendan Burke posted the wins in goal.

FAST FACTS: As a team, Calgary is 54.6% in the face-off circle with Matteo Danis posting a team best 59.7%…The Hitmen have played an Eastern Conference low 16 games.  On the flip side Regina and Prince Albert have already played 20 times…Brayden Peters has the third best goals against average in the league at 1.98 and the second best save percentage at .934.

KILLING TIME: Calgary’s penalty kill is number one in the WHL at 89.5%. It has killed 24 of the last 25 shorthanded situations.

REGULAR SEASON CAREER MILESTONE WATCH: Brayden Peters is 67 saves away from 3,000.  Riley Fiddler-Schultz is four games away from 200 while Trey Patterson is five games shy of 100.

PROSPECT WATCH: Kalan Anderlini, Calgary’s ninth-round pick in the 2021 WHL Prospects Draft, is playing in U18 Prep in the CSSHL with Yale Hockey Academy.  In nine games the 16-year-old defenceman has five points (5a).

UPCOMING GAMES: Calgary will enjoy a two-day break before facing the Americans in Kennewick on Friday, Nov. 18.  The U.S. Division road trip concludes in Spokane the following night on Saturday, Nov. 19.  The next Hitmen home game is not until Friday, Nov. 25 when the club welcomes the Prince Albert Raiders to Scotiabank Saddledome for a 7:00 p.m. start.

SHOT CLOCK: Calgary’s 46 shots on Sunday against Everett tied a season-high reached on two previous occasions.  Their 24 second period shots were the most by any team in the WHL in the middle frame this season.  Tyson Galloway and Zac Funk tied for the team lead with seven shots on goal each.