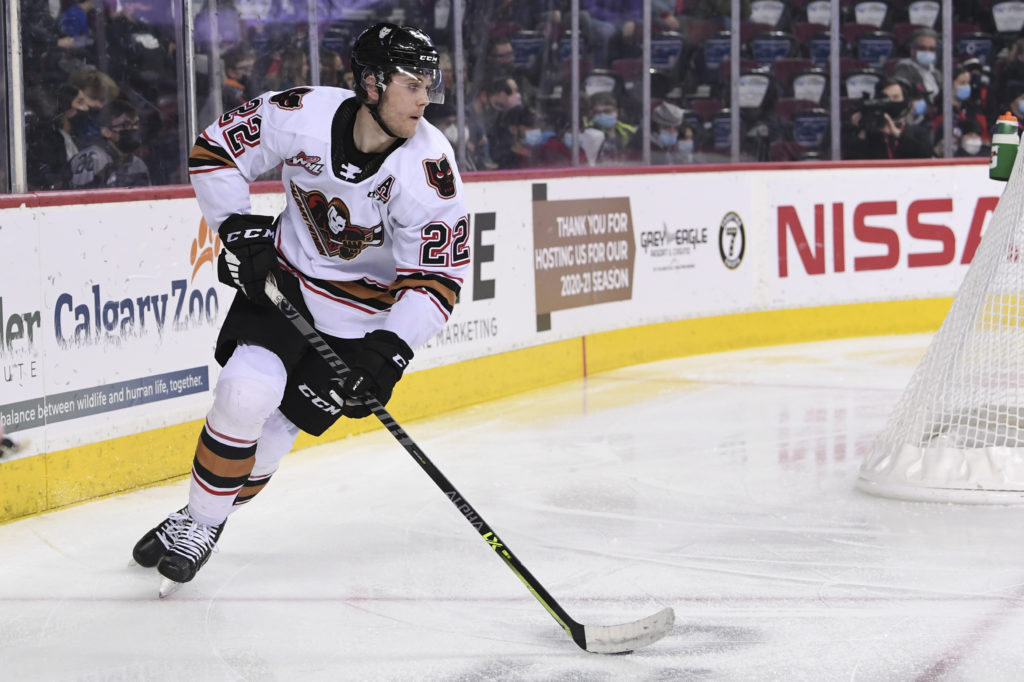 HITMEN HEADLINES: The Calgary Hitmen (13-7-3-1) open a busy prairie road trip tonight in Swift Current against the Broncos (12-13-0-0).  Game time is 6:00 p.m. MT at InnovationPlex.  For Calgary it will be the first of four games in five days and marks their first action since Sunday’s 5-3 win over Moose Jaw in the ENMAX Teddy Bear Toss.  Rookie forward London Hoilett scored 5:02 into the first period to trigger a blizzard of 20,294 teddy bears.  Riley Fiddler-Schultz and Carter Yakemchuk paced the Hitmen attack, each notching a goal and two assists on a day where Calgary outshot the Warriors 41-20.  The Broncos are facing back-to-back games having played in Lethbridge last night where they fell 7-2 to the Hurricanes.

WHERE THEY STAND: The Hitmen are tied for sixth in the Eastern Conference with Regina at 30 points.  Swift Current is ninth with 24 points.

SWIFT CURRENT: Tonight is the third of five regular season meetings between the two Central Division rivals and their first since an opening weekend home-and-home set. The road team has won both meetings with Calgary posting a record of 1-0-0-1. Grayden Siepmann (3a) leads all Hitmen with three points in the season series.  Clarke Caswell (1g, 1a) and Sam McGinley (2a) are the top performing Broncos with two points each.  Calgary is 5-1-1-0 in their last seven visits to InnovationPlex.  The two teams won’t meet again until Friday, Jan. 13 back at Scotiabank Saddledome.

Sept. 23/22 in SC: Hitmen 2 Broncos 1…The Hitmen never trailed as Ethan Buenaventura made 18 saves to record the win.

STREAKS: Riley Fiddler-Schultz (1g, 3a) and Sean Tschigerl (2a) both have points in back-to-back games.  Matteo Danis (2a) saw his two-game point streak end Sunday against Moose Jaw.  Jacob Wright (3g, 9a) has points in eight of his last nine games.  Zac Funk (5g, 2a) has scored in five of his last six outings.

FAST FACTS: The Hitmen are 10-3-2-0 in their last 15 games…Calgary’s last eight goals have been scored by eight different players in Carter Yakemchuk, Jacob Wright, Riley Fiddler-Schultz, Zac Funk, London Hoilett, Brandon Whynott, David Adaszynski and Carson Wetsch…The Hitmen are 4-2-2-1 against teams from their own division…Calgary has played the fewest games of any team in the Eastern Conference at 24.  Only Seattle, at 23, has played fewer games in the entire league.

WHL TOP-10: Brayden Peters is tied for the league’s seventh best save percentage at .919.

HOME AND AWAY COMPARISON: The Hitmen are 7-3-2-0 on the road this season and have won their last two games in enemy buildings.  Swift Current is 8-7-0-0 on home ice.

GAME-WORN AND GAME-ISSUED JERSEY AUCTION: During Sunday’s 2022 ENMAX Teddy Bear Toss, Hitmen players wore special red-themed teddy bear jerseys with snow-capped numbers and a Santa hat on the primary logo.  Those jerseys are now in an online auction until Wednesday, Dec. 14 at 9:00 p.m. MT.  Fans can bid on the 24 game worn and game issued jerseys at elevateauctions.com/TeddyBearToss.  Included among the items is a Hitmen Suite for 12 as donated by Ferrari of Alberta.

PROSPECT WATCH: Hitmen prospect Wyatt Pisarczyk has been named to Team Alberta for the 2023 Canada Winter Games.  The 15-year-old was Calgary’s second round pick, 29th overall, in the 2022 WHL Prospects Draft.  The Airdrie, AB product is playing in the Alberta Elite Hockey League with the U-18 Airdrie CFR Chemicals Bisons.  In 13 games the right-shot defenceman has nine points (4g, 5a) to sit tied for second in team scoring.

UPCOMING GAMES: Calgary’s road trip resumes on Friday, Dec. 9 in Moose Jaw before heading to Regina (Dec. 10) and Brandon (Dec. 11).  The Hitmen will then head to Lethbridge the following weekend on Saturday, Dec. 17 before returning home to host Edmonton in their final game before the Christmas break on Sunday, Dec. 18 at 2:00 p.m.