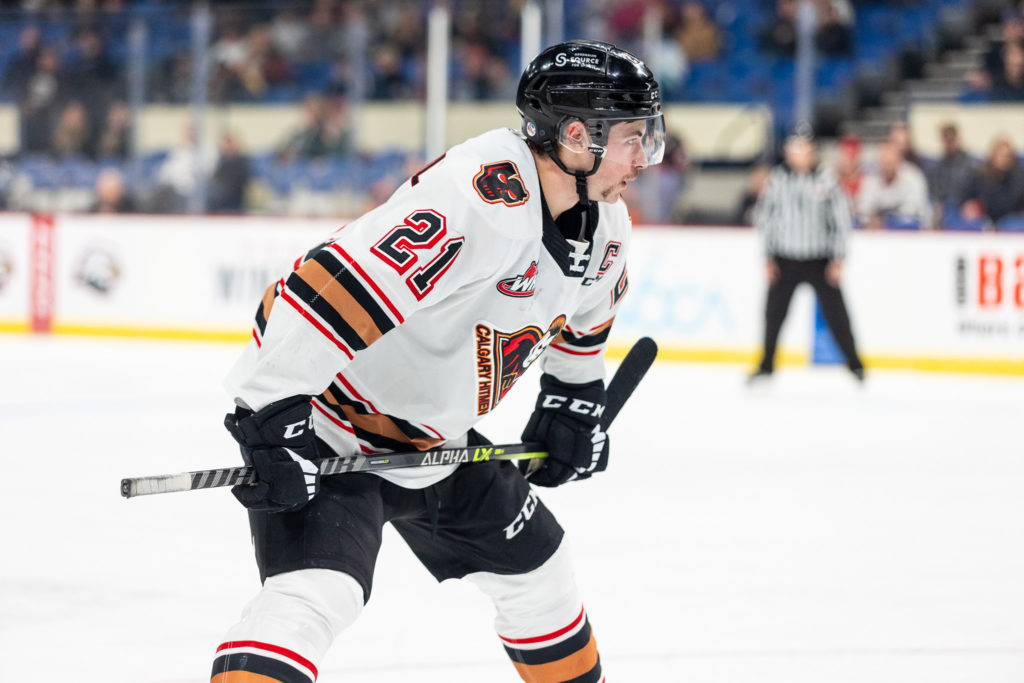 HITMEN HEADLINES: After a two-day break the Calgary Hitmen (10-5-1-1) five-game U.S. road trip resumes tonight in Kennewick against the Tri-City Americans (7-11-0-0).  Game time is 8:05 p.m. MT at Toyota Center.  The Hitmen are 2-1 on the swing and coming off Tuesday’s 4-1 loss in Portland.  Keagan Slaney opened the scoring for the Hitmen before the Winterhawks replied with four unanswered to snap Calgary’s season-high seven game winning streak.  Tri-City has been idle since last Saturday’s 7-3 loss in Spokane.  Cade Hayes paced the Chiefs with two goals and two assists while Lucas Dragicevic (1g,1a), Ethan Ernst (1g,1a) and Parker Bell (2a) all had multi-point games for the Americans.  The Hitmen are tied with Moose Jaw for fourth in the Eastern Conference at 22 points while the Americans are seventh in the West with 14 points.

TRI-CITY: Tonight is the first and only meeting of the 2022-23 regular season between the Hitmen and Americans. It’s also their first encounter since Nov. 8, 2019 when Tri-City posted a 4-3 shootout victory up in Canada. The Americans forced extra time when Connor Bouchard tied the game with 22 second left before Bouchard struck again with the shootout winner.  The last time they played in Kennewick was on Nov. 24, 2018 when the Americans once again won in a shootout, this time by a 3-2 final.  Trailing 2-1 late in the third period, Sasha Mutala forced extra time with 1:24 remaining.  Kyle Olson and Isaac Johnson then scored in the three-round shootout while Beck Warm stopped both Hitmen attempts.

QUARTER MARK: The Hitmen have played 17 of their 68 regular season games, officially completing 25 percent of their schedule.  Calgary is on pace to produce an overall record of 40-20-4-4 for a total of 88 points which would far exceed last season’s 59 point campaign.

STREAKS: Jacob Wright (2a) is on a two-game point streak.  Oliver Tulk (3g, 2a) saw his four-game streak end in Portland while two-game point streaks for Billal Noori (1g, 2a), Grayden Siepmann (1g, 1a) and Tomis Marinkovic (2a) also ended against the Winterhawks.  Ethan Buenaventura has won his last two starts in goal.

FAST FACTS: Calgary’s 19 goals this month have been scored by 12 different players.  Riley Fiddler-Schultz and Oliver Tulk lead the way with three goals each.  As a team, Calgary is 54.5% in the face-off circle with Riley Fiddler-Schultz posting a team best 58.1%…The Hitmen have played an Eastern Conference low 17 games.  On the flip side Brandon, Regina and Prince Albert have already played 21 times…Brayden Peters has the second best save percentage in the league at .930 and the fourth-best goals against average at 2.15.

KILLING TIME: Calgary’s penalty kill is number one in the WHL at 89.9%. It has killed 27 of the last 28 shorthanded situations.

REGULAR SEASON CAREER MILESTONE WATCH: Brayden Peters is 31 saves away from 3,000.  Riley Fiddler-Schultz is three games away from 200 while Trey Patterson is four games shy of 100.

HITMEN ALUMNUS: Jake Bean, who played parts of four seasons with the Hitmen from 2014-18, is in the NHL with the Columbus Blue Jackets.  The 24-year-old defenceman has six points (1g, 5a) in 14 games.  Bean sits 17th all-time on Hitmen’s regular season points list with 175.  That is fourth among defenceman behind only Matt Kinch, Kenton Smith and Michael Stone.

UPCOMING GAMES: Calgary will wrap up their five-game U.S. Division road trip tomorrow, Saturday, Nov. 19 in Spokane against the Chiefs.  The Hitmen will then enjoy a five-day break before returning to home ice on Friday, Nov. 25 against the Prince Albert Raiders.  Game time at Scotiabank Saddledome is 7:00 p.m.

TICKETS: Let the fur fly!  Fans can purchase tickets to one of the most anticipated games of the regular season, the ENMAX Teddy Bear Toss.  The game is Sunday, Dec. 4 at 2:00 p.m. in the ‘Dome against 2023 projected first-round NHL Draft prospect Brayden Yager and the Moose Jaw Warriors.  Admission is $25.99 for adults and $15.99 for kids.  Find full details at hitmenhockey.com.