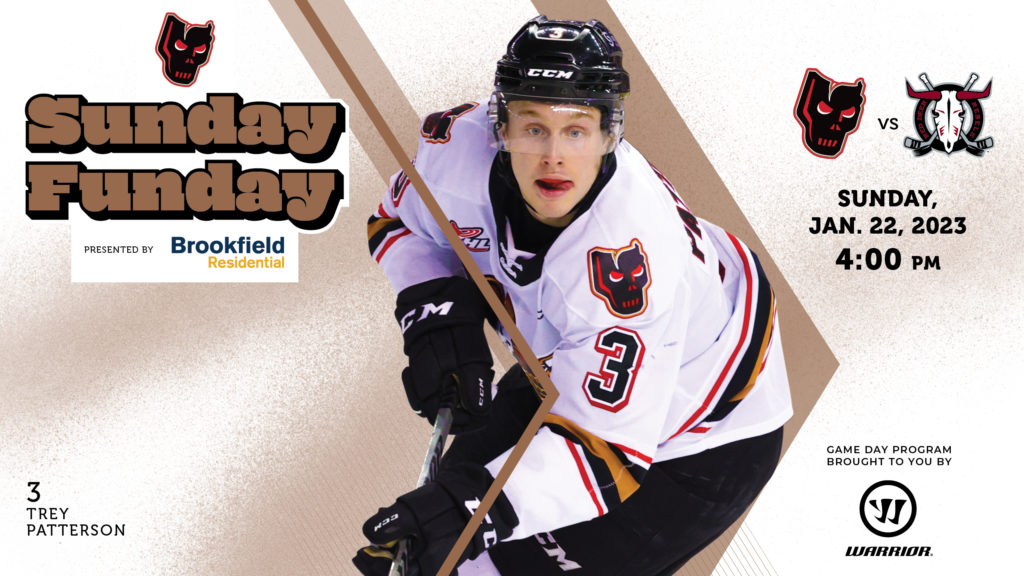 HITMEN HEADLINES: The Calgary Hitmen (22-16-3-1) are back on Scotiabank Saddledome ice this afternoon to close the weekend against the visiting Red Deer Rebels (31-8-1-3).  Game time is 4:00 p.m. in another Sunday Funday, presented by Brookfield Residential.  In addition to $2 sips and snacks specials all game long, look for concourse activities from TELUS Spark and a cast of characters outfitted by the Costume Shoppe.  There are also $6 Hitmen Happy Hour food and drink deals throughout the day and a post-game family skate.  The Hitmen are coming off last night’s 7-1 loss in Medicine Hat where Oliver Tulk scored the lone goal for the visitors, his 18th of the season.  Calgary has now dropped four games in a row.  The Rebels also played last night skating to a 2-1 overtime win over the visiting Brandon Wheat Kings to push their winning streak to five games.

WHERE THEY STAND: The Hitmen are sixth in the Eastern Conference with 48 points sitting two points ahead of Regina.  Red Deer leads the conference with 66 points, one point ahead of Winnipeg.

RED DEER: Today is the sixth of eight regular season meetings between the two clubs. Calgary is 0-3-2-0 against Red Deer despite recording 19 more shots. Jacob Wright (2g, 3a) and Oliver Tulk (1g, 4a) are the top performers for Calgary with five points each.  David Adaszynski (1g, 2a) is next with three.  Kai Uchacz (7g, 1a) leads the Rebels with eight points while Kalan Lind (2g, 5a) is next with seven.  The two teams won’t meet again until March 10 in Red Deer.

Oct. 8/22 in RD: RD 3 CGY 2 OT…Jace Isley scored twice including the winner on a penalty shot.

FAST FACTS: Today is Calgary’s fourth game in five days and their 11th in 22 days to begin January…Riley Fiddler-Schultz passed 500 face-off wins last night in Medicine Hat while Oliver Tulk eclipsed the 400 win mark…Eight Hitmen have scored eight or more goals this season…Calgary has given up the first goal in six of their last seven games.

3-IN-3: This weekend’s trio of games marks the third time this season the Hitmen face this compacted part of their schedule.  They will do it on two more occasions, next weekend and again in March for a total of five times during the 2022-23 campaign.  So far Calgary has a combined record of 2-5-1-0 through the first eight games of compressed play.

SCOUTS EYE: NHL Central Scouting has released its Mid-Term Rankings for the 2023 NHL Draft.  Two Hitmen have made the list as Grayden Siepmann is number 138 among North American skaters while Oliver Tulk is 211.

COUNTDOWN TO CONNOR: The Hitmen have opened second level seating at Scotiabank Saddledome for their Wednesday, Feb. 1 game against Connor Bedard and the Regna Pats.  Game time is 7:00 p.m.  Bedard is a two-time Team Canada World Junior Gold Medalist and the projected first overall pick for the 2023 NHL Draft.  Find all the ticket information at HitmenHockey.com.

PROSPECT WATCH: Allen Sherpa, Calgary’s eighth-round pick in the 2021 WHL Prospects Draft, is playing in the Alberta Elite Hockey League with the U18 AAA Calgary Royals.  In 30 games the 16-year-old forward is tied for the team lead in scoring with 34 points (10g, 24a).

UPCOMING GAMES: The Hitmen are idle until Friday, Jan. 27 when they head to Edmonton to meet the Oil Kings.  Less than 24 hours later they will be back home for a 2:00 p.m. start against the Saskatoon Blades on Saturday, Jan. 28 at Seven Chiefs Sportsplex on Tsuut’ina Nation.