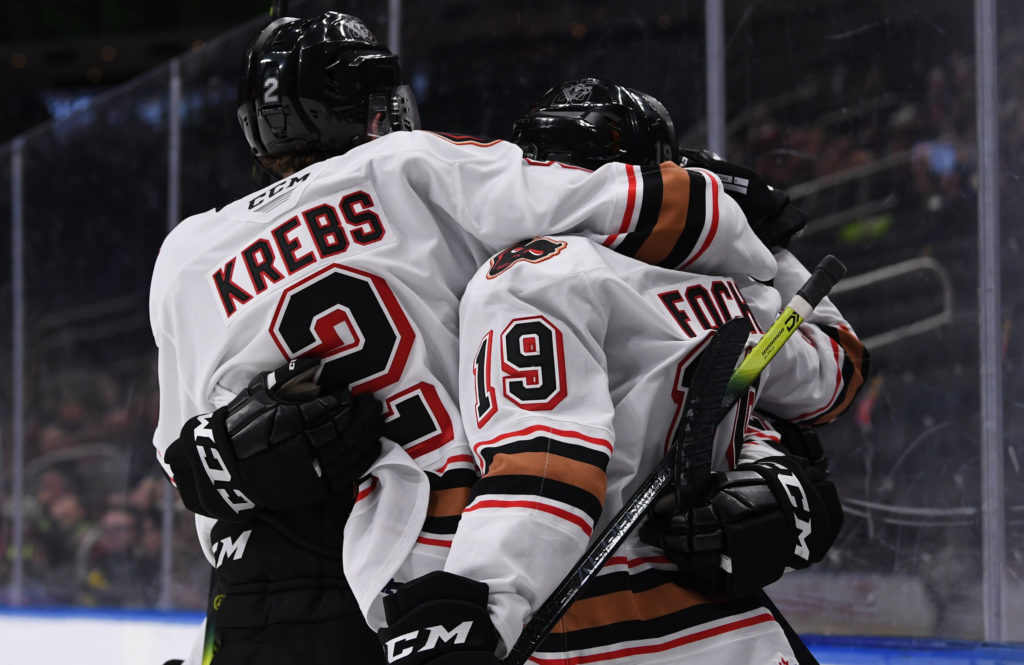 It’s never a bad thing to get away.

With a current slump of 1-4-1 in the past six games, the Hitmen are hoping the five-game trip they are about to take on can spark a run to turn things around.

It all starts tonight with the third meeting of the season against the Saskatoon Blades. After dropping the first two contest against the Blades, the Hitmen are looking to exact some revenge after being outscored by a combined 13-5 during the pair of clashes at the ‘Dome. Last season the away club won all four matchups, a trend the Hitmen hope continues.

The most recent outing saw the boys from the Stampede City drop a 4-2 decision to the Edmonton Oil Kings exactly one week ago. Mark Kastelic and Jonas Peterek provided the markers while Brayden Peters did all he could in making 35 saves.

After being severely outshot in the contest, the past week was key to get back to basics in practice and fine-tune various areas in their game to find a way back in the win column.

Two major areas of emphasis, discipline and getting the power play clicking. The five-on-five play has been strong, it’s just a matter of winning the special teams battle and staying out of the box.

“The most important thing for us is to work on the game management side of things. We’ve been consistently inconsistent. We need to play to our identity and sharpen up our habits. We can’t afford to cut corners or look for easy way out of things, everything needs to be at 100% whether it’s on the forecheck, finishing hits or making the simple first pass.” – Steve Hamilton

“A longer road trip like this can really help us get back in our groove. You are more focused into playing spoiler and keeping things simple instead of trying to be more fancy. A lot of times it’s that tough gritty style of play that is the deciding factor especially in tight games like we have been in a lot lately.” – Josh Prokop

Mark Kastelic is one goal away from 100.  Kastelic is also 14th on the clubs all-time points list with 182, 11 points back of Kenton Smith who holds 13th place

Jett Woo needs five assists for 100 and five games away from 200 career games.