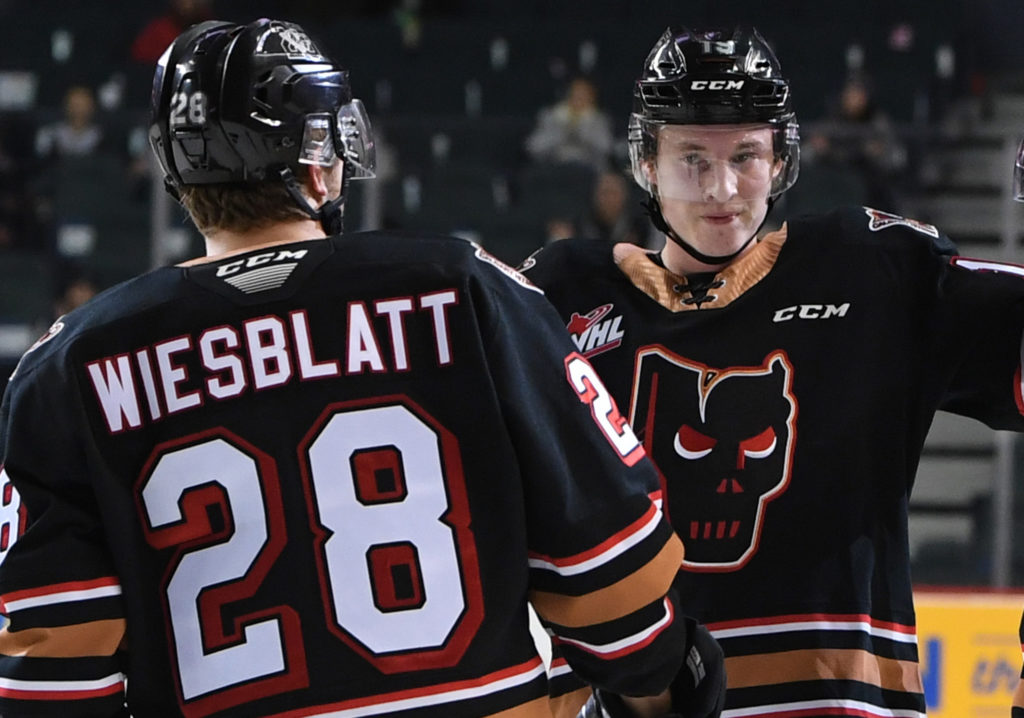 A long road trip can do some good.

The Hitmen kick off a packed stretch of four games in five nights Wednesday in Swift Current to take on the Broncos for the second straight tilt.It’s the third meeting of the season between the divisional opponents, with the Hitmen picking up three out of four points in the series so far.

Sunday afternoon saw the clubs square off at the Scotiabank Saddledome, as the Hitmen came away with a 3-1 win thanks to goals by Orca Wiesblatt, Blake Allan and Connor Gabruch. Brayden Peters stopped 24 shots to record the win in his fourth straight start, putting up a 1.76 GAA and .933 SV% in those stretch of games.

With a road mark of 9-6-3 thus far, the Hitmen will look to not only improve that mark but also use the three games in hand they have over both the Lethbridge Hurricanes and Medicine Hat Tigers to gain some ground. In a crazy Central Division, it’s a tight race for positioning with a lot of hockey left to go.

As it stands right now, the Hitmen own the first wildcard spot in the Eastern Conference, with potential to cross over to the East Division come playoff time when it’s all said and done.

But for now, the focus remains on the Broncos, a club they have outshot 81-47 in the two games, with 45 of those shots being fired in the last meeting.

It’s a team they know they can’t look past as they look for back-to-back wins and start off the trip on a positive note.

Jett Woo is on a season-high seven-game point streak (1G, 7A), his career best is eight games which was set last season with the Moose Jaw Warriors.

Hitmen are 2-2-2-1 in their last seven visits in Swift Current, dropping a 3-2 overtime decision in the 2019/20 season opener in the last visit.

Hitmen are 10-9-3-0 against Central Division opponents this season. In their last eight games against division rivals they have set a mark of 4-3-1 ahead of Wednesday’s clash.

Jackson van de Leest is one game shy of 150

Mark Kastelic is tied with Brandon Segal for 11th all-time on the clubs all-time points list with 206, nine points back of Ryan Getzlaf for 10th. Kastelic is also one goal back of Segal for fourth on the all-time goals list.

Jack McNaughton needs 17 saves to move into a tie with Nick Schneider for 10th place on the clubs all-time saves list at 1,651.