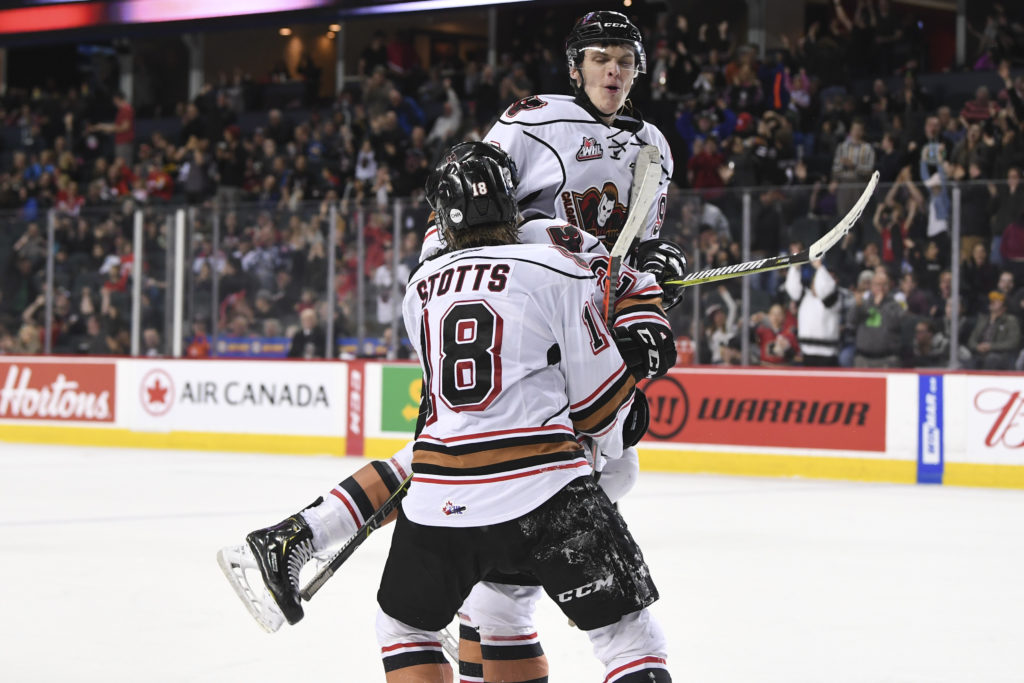 The drive for five is on.

Saturday night sees the Hitmen back in action in Edmonton at Rogers Place to take on the Oil Kings in the second meeting of the season between the Central Division rivals.

Sept. 27 was the first time they met, which saw the Hitmen erase a 2-0 deficit to storm back for a 4-3 overtime win. Since then, the Hitmen have been on a roll riding a four-game winning streak and mark of 4-0-1 through the first five games of the young WHL season.

This past Sunday was their most recent triumph with a 5-2 win over the Portland Winterhawks, led by Orca Wiesblatt, Jett Woo and Egor Zamula who all had a goal and an assist in the win.

“This start is the reflection of the maturity of our group. We’ve been playing to our identity, every guy brings a different element to the group and that’s huge for us to be able to mix things up and not be one dimensional.” – Steve Hamilton

“We wanted to jump out to a fast start. We had confidence in ourselves leading into the beginning of the season and knew that we had the potential to do something special and this start shows that.” – Riley Stotts

“I’m super thankful for the coaching staff and my teammates for believing in me enough to wear the ‘C’. It’s a huge honour and we have a great leadership group overall that are very vocal and do a great job of leading by example. Everyone in the room has great leadership qualities and a big part of our overall success.” – Mark Kastelic

After playing just five games in the first 22 days of the WHL regular season schedule, tonight begins a stretch of 12 games in 29 days.

Kastelic, who is in his fifth campaign with Calgary, becomes the fourth player in franchise history to wear the ‘C’ in back-to-back seasons and the first since Cody Sylvester (2011-13)

The Hitmen head into the matchup as the fifth ranked team in this week’s Kia CHL Top-10 Rankings and are the top representative from the WHL.

Dakota Krebs is one game away from 250

Carson Focht is five goals away from 50

Mark Kastelic is one goal shy of moving into a tie with Brett Sonne for 13th on the clubs all-time goal scoring list with 89.  Kastelic is also two points away from tying Sonne for 18th place on the all-time points list with 170