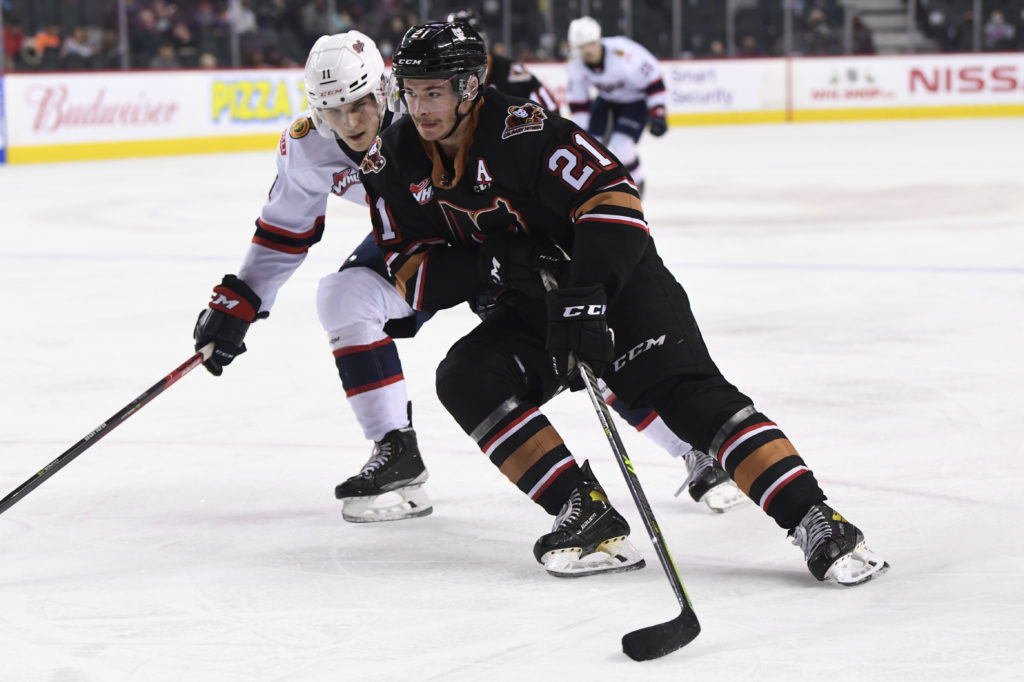 HITMEN HEADLINES: The Calgary Hitmen (14-12-4-2) open a three-game Saskatchewan road trip tonight in Regina against the Pats (15-17-0-0).  Game time is 6:00 p.m. MT at Brandt Centre.  Calgary is 2-0-1 in their last three outings and coming off Sunday afternoon’s 3-2 home ice overtime loss to the Brandon Wheat Kings.  Zak Funk led the Hitmen with a goal and an assist while Cael Zimmerman also found the back of the net.  Nolan Ritchie paced the Wheat Kings with a pair of goals including the winner 3:46 into the extra session.  The Hitmen enter the day seventh in the Eastern Conference with 34 points while the Pats sit 11th with 30.  Under the WHL playoff format, the top eight teams in each conference qualify for the post season.

VS. REGINA: Tonight is the second of six regular season meetings with the Pats. Calgary leads the season series 1-0 thanks to a 10-3 home ice victory in November. Riley Fiddler-Schultz notched a career-high six points with four goals and two assists.  Cael Zimmerman added a pair of goals while Sean Tschigerl recorded a goal and three assists.  The two clubs will meet again in just over two weeks on Sunday, Feb. 6, again in Regina.

STREAKS: Riley Fiddler-Schultz (3g, 3a) is on a three-game point streak.  Grayden Siepmann (3a) has points in back-to-back games.  Brayden Peters has won his last two starts posting a goals against average of 1.50 and a .940 save percentage.  Blake Stevenson (4g, 5a) saw his four-game point streak end Sunday against Brandon while a two-game streak for Carter Yakemchuk (2a) was also snapped against the Wheat Kings.

LEADERSHIP GROUP: The Hitmen have named 20-year-old forward Cael Zimmerman their new captain.  He replaces Jackson van de Leest who was traded to Red Deer last week.  Zimmerman had served as an alternate this season and has played his entire five-year WHL career in Calgary.  Fellow overage forward Blake Allan also joins the leadership group to wear an ‘A’ alongside Riley Fiddler-Schultz, Tyson Galloway and Sean Tschigerl.

LET’S GO: Today is the third game in a stretch of four games in five days and a run of six games in nine days for the Hitmen.

ON THE ROAD AGAIN: Starting tonight in Regina, the Hitmen will play eight of their next 12 games away from Scotiabank Saddledome.

FAST FACTS: Calgary has fired 33 or more shots on goal in six consecutive games…The Hitmen are 7-3-4-2 in their last 16 games…Riley Fiddler-Schultz is tied with Regina’s Connor Bedard for the WHL lead in shots on goal with 150.  Fiddler-Schultz is also tied for third in game winning goals with five…Sean Tschigerl tops the league in shorthanded markers with five…Blake Stevenson is tied for seventh in the WHL in power play assists with 14…Brayden Peters is fourth in the WHL in minutes played at 1,553 and fifth in saves with 721.  His 13 wins are tied for seventh…Calgary is 6-1-1-1 against the East Division…Zac Funk has at least one shot on goal in all 31 of his games this season…The Hitmen power play has scored in four of their last six games.

UPCOMING GAMES: Calgary’s road trip continues tomorrow in Moose Jaw (Jan. 19) before concluding in Swift Current on Friday, Jan. 21.  The Hitmen will then host Moose Jaw on Sunday, Jan. 23 in a 4:00 p.m. start at Scotiabank Saddledome.