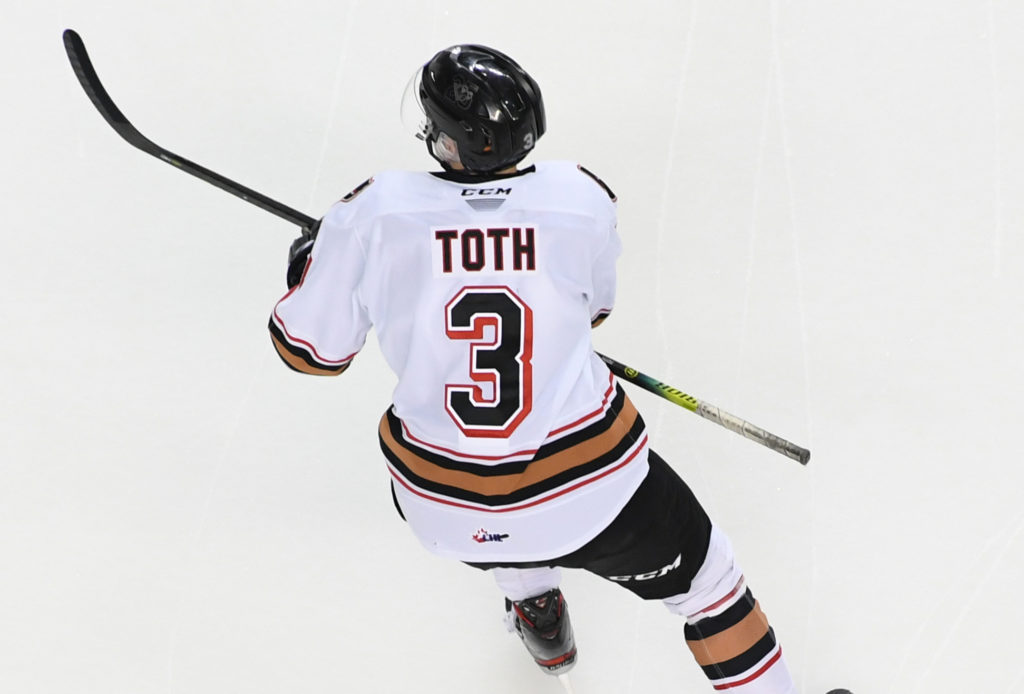 The Hitmen started off the 2021 season on the right foot after a 2-0 victory over the Red Deer Rebels last night at the Seven Chiefs Sportsplex on Tsuut’ina Nation. Sean Tschigerl and Tyson Galloway provided the markers for the home side, while Brayden Peters was outstanding in a 27-save shutout performance.

Tschigerl got things started with six minutes remaining in the opening frame, receiving a bank pass from Riley Stotts which saw the sophomore forward then burst off into a breakaway – snapping a perfect wrist shot into the cage. The second goal came four minutes into the second stanza as Galloway tried to clear the puck out of the zone by banking it off the boards, the puck went all the way down and squeaked by Rebels netminder Ethan Anders to the surprise of all.

Doesn’t matter how they go in, they all count.

From there it was the Peters show as the netminder made jaw dropping save after save to keep Red Deer off the scoresheet.

“He was so on point,” head coach Steve Hamilton said. “He seemed so calmed and poised and made a number of quality saves. He was our best player by a country mile.”

“I just had my mind on the next shot, next save and not get ahead of myself,” Peters said. “We all were pumped  to get out there and overall just grateful to be back again.”

For the first game in nearly a year for the Hitmen, the result was exactly what they wanted but there are still areas needed to be worked out that Hamilton hopes to see the club clean up as the season rolls on.

“We played an energized game, might have hit a wall in the second half of the game but we found a way,” he said. “We need to tighten up our game with our puck movement, we have to be more direct and there will be key battles we need to be prepared to be in and win.”

“We have a foundation to build on and need to do that for tonight and going forward.”

It’s now off to Red Deer for the rematch as the Hitmen look to start the season a perfect 2-0, while the Rebels will search for their first win of the season.

Fans can catch TELUS Hitmen Hockey on the all-new WHL Live on CHL TV or listen into the Rebels stream as the game will not be available on Sportsnet 960.

After tonight’s clash, the Hitmen will be back in action next weekend for a three-in-three set against the Medicine Hat Tigers starting Friday back at the Seven Chiefs Sportsplex on Tsuut’ina Nation.

A Night Of Firsts

It was a jam packed milestone game all around for the Hitmen Friday night.

Galloway’s second period marker was his first career WHL goal, picking up the marker in his 37th WHL game.

Brayden Peters picked up his first career WHL shutout in a first star performance. With the win, the 18-year-old is now a perfect 3-0 against Red Deer in his career.

Jack McNaughton needs one save to tie Mike Snider for ninth on the clubs all-time saves list at 1,808.

Sean Tschigerl – The former fourth overall pick in the 2018 WHL Bantam Draft had a strong game in Friday’s win over the Rebels with a goal and three shots.

Last season, Tschigerl finished with 13 points (4G, 9A) as one of two 16-year-olds on the Hitmen roster.

“He’s a dedicated kid and has lots of the qualities you love and look for in a Hitmen player,” Hamilton said on the forward. “He wants to be a driver of this team.”

“We’ve all been waiting to do this. To see it come to fruition and see the guys all in their gear ready for puck drop, you couldn’t help but feel a sense of gratitude for all the behind the scenes work to get us to this point. It’s a deep appreciation for what we are doing, this is something that was taken away for a long time. It would be hard not to let that one hit you in the heart a little, it was good. You could feel the general gratitude.”

Head coach Steve Hamilton on the emotion on being back playing games.