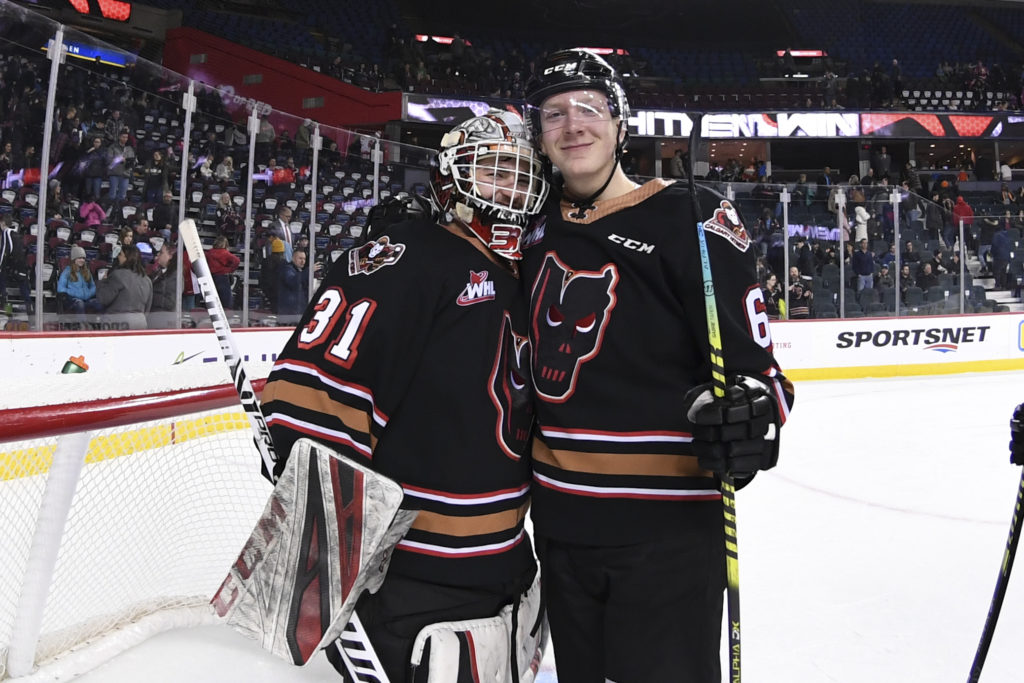 Catching fire when it matters most.

With nine wins in their last 12 games, the Hitmen have found their groove as the WHL regular season winds down with 14 games left to go. The latest match up sees the boys from the Stampede City head to Victoria to take on the Royals for the lone meeting of the season.

The Hitmen are riding high after a memorable 6-5 comeback overtime win over the Kelowna Rockets Monday afternoon, erasing a 5-1 deficit after 40 minutes and scoring five unanswered goals for the win. Carson Focht and Kyle Olson both scored twice with Riley Fiddler-Schultz providing the other marker in regulation. Josh Prokop scored 2:31 into the extra session to complete the comeback.

With a 2-0 mark so far on the trip, the Hitmen have started the trip on the right foot and have posted a 4-1 mark in their last five road games while the Royals have won three in a row on home ice.

Something has to give.

Their strong play have catapulted the Hitmen within four points of the Medicine Hat Tigers for third in the Central Division with a game still in hand. Not to mention, they have also created separation room between themselves and the Saskatoon Blades for the first Wildcard spot with a six point cushion.

Nothing is set in stone but one thing that is for sure, things are going to be very interesting headed down the stretch.

“Our team has gone through an evolution from the start of the year. If you’re going to be successful long term, you have to have an identity you can repeat day in and day out without a lot of bearings. Our guys have been consistent and embraced it, which bodes well with what we’re trying to accomplish.” – Steve Hamilton

So far on the trip, Carson Focht (3G, 1A) and Jett Woo (4A) lead the way with four points each while Kyle Olson (2G, 1A) and Orca Wiesblatt (3A) both have three points.

In last season’s meeting, the Hitmen skated away with a 6-3 victory on ‘Dome ice, with three markers coming on the power play.

Hitmen are ninth in the WHL in goals for per game, averaging 3.44 and also ninth in goals against at 2.94.

Connor Gabruch is one game shy of 100

Dakota Krebs is two games away from 300

Mark Kastelic is six points back of Cody Sylvester and Borys Protsenko, share seventh spot with 229 points, on the clubs all-time points list

Jack McNaughton is 18 saves behind Cody Porter for ninth place on the clubs all-time saves list.  Porter has 1,734.