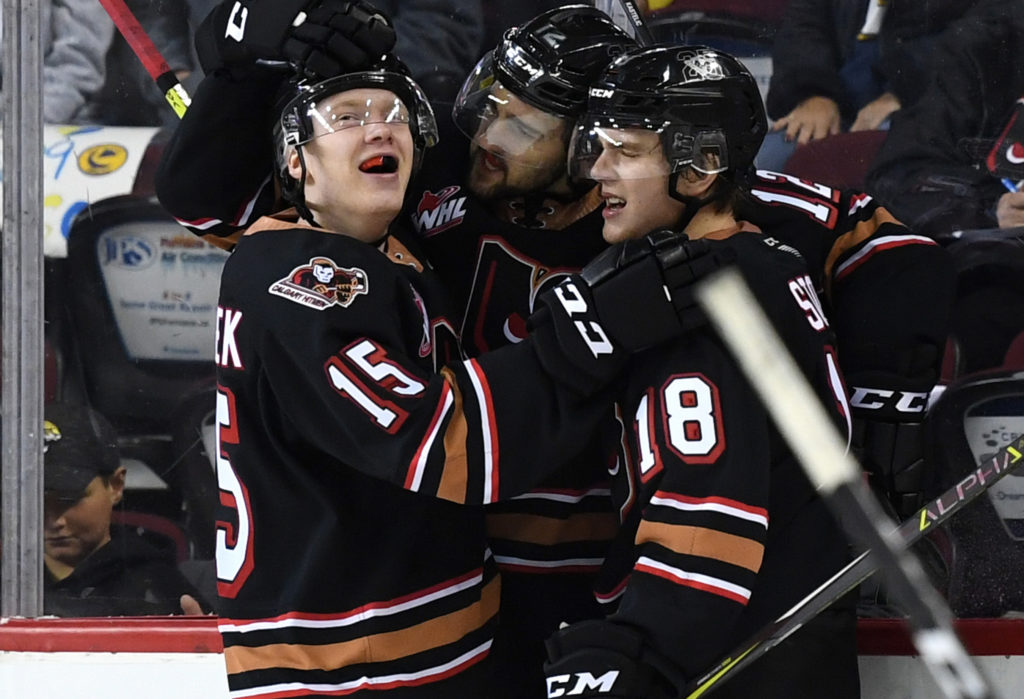 The Hitmen officially kick off the second half of their schedule Friday night in Medicine Hat to take on the Tigers for the third meeting in seven days.

It’s been a unique stretch facing their rivals as often as they have, as they look to add another win in the season series which currently sees them having three wins in four games against the Tigers.

New Year’s Day was the most recent clash which saw the Hitmen power past Medicine Hat by a 4-2 score. Jonas Peterek, Hunter Campbell, Mark Kastelic and Sean Tschigerl found the back of the net while Jack McNaughton stopped 32 shots en route to his 13th win of the season.

After coming out of the gates with four games in six days after the holiday break, the Hitmen are now tasked with another three-in-three weekend, the first of two this month.

It’s a crazy stretch, but that’s just how the players like it.

With 41 points so far on the year, the Hitmen are now just seven back of Medicine Hat for third in the Central Division with two games in hand. Adding a little more value into not only Friday’s tilt, but the weekend overall.

They’ve won all three games in a three-in-three weekend before, they know they can do it again.

“We take it one game at a time and each time against them they are pretty competitive games. They are good on the rush and the power play and those areas we need to identify as non-negotiable. We have to have constant pressure on the puck from not just our defenders but forwards as well and play a relentless game.” – Steve Hamilton

“We enjoy playing this much coming out of the break and it helps us stay focused. We know we can get two points on any night when we stick to our game plan and play a complete game in all areas of the ice. Everyone is buying into the identity set in place and it’s going to be huge for us moving forward.” – Mark Kastelic

This weekend marks the fourth time this season the Hitmen will play three games in as many days.  In their previous three they have posted a combined record of 5-3-0-1

In the season series against the Tigers, the home team has won all four meetings by a combined score of 15-6.

Carson Focht (1G, 3A) and Orca Wiesblatt (4A) lead the Hitmen in the season series with four points each against Medicine Hat. Headed into Friday night, Wiesblatt is on a five-game point streak (2G, 3A)

Officially halfway through the season, the Hitmen are seven points ahead of their pace 34 games into last season when they were 15-15-3-1.

Josh Prokop is one game away from 100.

Blake Allan is two games shy of the century mark.