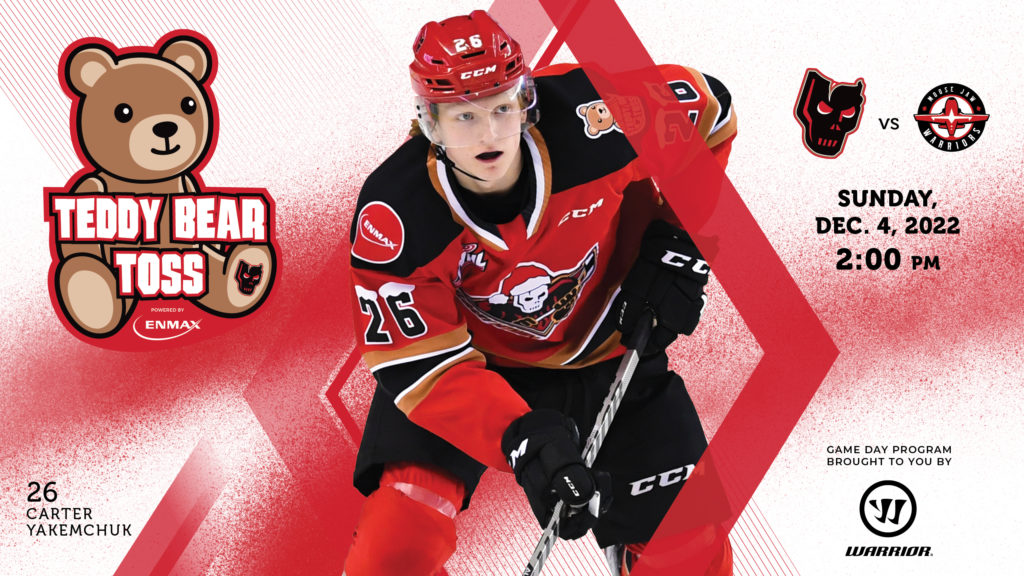 HITMEN HEADLINES: The Calgary Hitmen (12-7-3-1) host the Moose Jaw Warriors (18-9-0-0) this afternoon in the ENMAX Teddy Bear Toss.  Game time is 2:00 p.m. with doors to Scotiabank Saddledome opening at 12:30 for Hitmen Happy Hour featuring $6 food and beverage items and $2 sips and snacks until the opening faceoff.  Third level seating remains with tickets available at HitmenHockey.com.  Fans are asked to bring a new or gently used small or medium sized stuffed toy to toss onto the ice when the Hitmen score their first goal.  Those bears will be shared among over 65 local agencies this holiday season including the Salvation Army, Alberta Children’s Hospital, Calgary Food Bank and Siksika Nation.  This year there is a charitable ask for 26,000 bears.  Today’s game will also include performances by the Our Lady of the Rockies High School Marching Band.

TOSS HISTORY: This event dates back all the way to year one of Hitmen Hockey when Borys Protsenko scored the first ever teddy bear goal on Dec. 16, 1995 triggering the release of 1,323 stuffed animals in front of 7.905 fans.  Calgary holds a lifetime record 17 wins, six regulation losses, one tie and two overtime losses in the ENMAX Teddy Bear Toss.

LOOKING BACK ON THE LAST FIVE:

GAME-WORN AND GAME-ISSUED JERSEY AUCTION: During the 2022 ENMAX Teddy Bear Toss, Hitmen players will wear special red-themed teddy bear jerseys with snow-capped numbers and a Santa hat on the primary logo.  These jerseys will be sold in an online auction from Dec. 4-14.  Fans can bid on the game worn and game issued jerseys at elevateauctions.com.

BEAR FACTS: All teddy bears collected today will be turned over to local charities tomorrow, Monday, Dec. 5 from 8:30 to 10:30 a.m. with distribution in the traffic loop outside the northeast entrance of the ‘Dome.  Hitmen players will be on hand to assist the process.

WHERE THEY STAND: The Hitmen are tied for sixth in the Eastern Conference with Regina at 28 points.  Moose Jaw is fourth with 36 points.

MOOSE JAW: Today is the first of four regular season meetings between the two clubs. Moose Jaw took five of their six games last season by a combined score of 25-15. The Hitmen have dropped five straight to the Warriors after having won the previous nine.  Prior to that, Moose Jaw rattled off 11 straight victories against Calgary.  Riley Fiddler-Schultz (2g, 4a) led all Hitmen with six points in the 2021-22 season series while Jagger Firkus (4g, 6a) topped the Warriors with 10 points.

UPCOMING GAMES: Calgary hits the road for their next five games beginning with a four-game prairie swing that opens Wednesday, Dec. 7 in Swift Current.  The journey will also take the Hitmen to Moose Jaw (Dec. 9), Regina (Dec. 10) and Brandon (Dec. 11).  Calgary will then head to Lethbridge the following weekend on Saturday, Dec. 17 before returning home to host Edmonton on Sunday, Dec. 18 at 2:00 p.m.