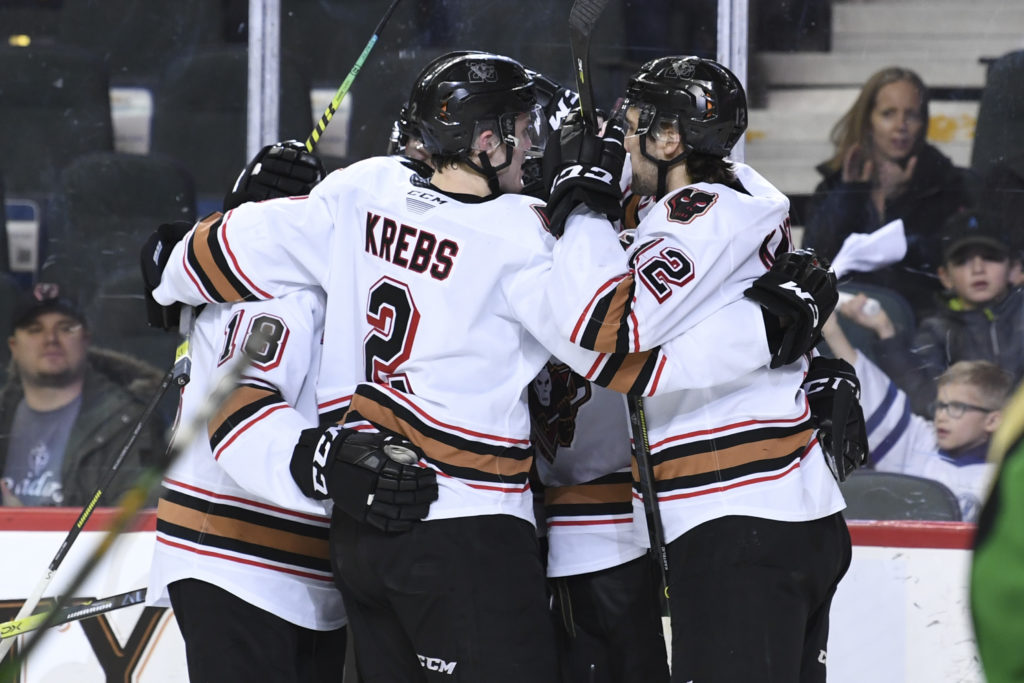 Not too high, not too low.

That’s been the motto for the Hitmen all season long and it’s something they’ll look to stick to as they get set for a Wednesday night clash against the Regina Pats. It’s the fourth and final meeting of the season as the Hitmen have gone a perfect 3-0 so far outscoring the Pats by 13-7 mark.

Despite dropping the last two games, there’s a lot of energy and high spirits in the Hitmen locker room with the way they have been playing as of late. The four-game win streak was evident of that, but even in setbacks they still showed a lot of character and resiliency.

The last outing was a wild 6-4 decision for the visiting Lethbridge Hurricanes, despite the Hitmen coming back from a 4-1 deficit in the third period to tie the game before the ‘Canes pulled ahead. Mark Kastelic scored twice in the final 20 minutes while Jett Woo and Carson Focht provided the other markers.

Ever since the calendar year changed over, the Hitmen have been getting stronger and closer to finding the consistency that the coaching staff has preached all season.

With just 17 games remaining on the regular season schedule, the intensity of each game is sure to ramp up and the importance of each point holding greater value.

They know that they will make it to the post-season, it’s just a matter of being the best version they can be headed into it as a group.

“We’ve been playing excellent hockey. Our guys are in a good place and know that they are doing the right things. I’m very pleased with how we’ve seen contributions everywhere and guys taking that next step.” – Steve Hamilton

“We can’t let our foot on the gas. We can’t take them lightly and focus to our game plan. They are a hard working team and each game we’ve played against them it’ been a battle. We want to use this game as momentum to get set for the road trip.” – Jett Woo

Of the 17 remaining regular season games, seven are at home and 10 are on the road with an upcoming five-game trip

Hitmen are +320 in the Shots For/Shots Against differential this season. They have outshot their opponents 36 times this season, equating to 70.6 percent of the time through 51 games

Jackson van de Leest is two points away from 50

Dakota Krebs is five games away from 300

Jack McNaughton is 25 saves behind Cody Porter for ninth place on the clubs all-time saves list.  Porter has 1,734