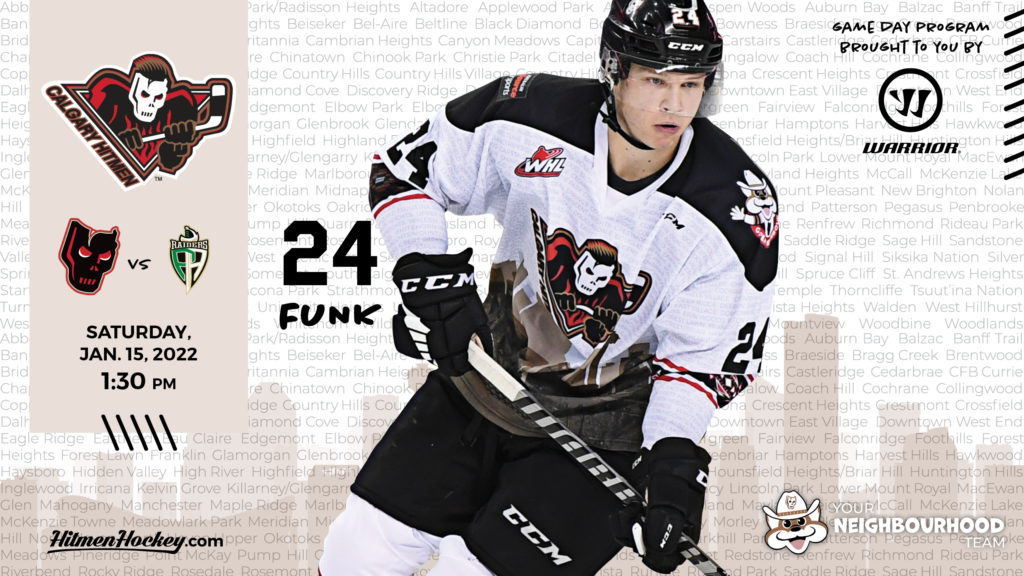 HITMEN HEADLINES: The Calgary Hitmen (13-12-3-2) take to the ice this afternoon to host the Prince Albert Raiders (14-17-1-1).  Game time is 1:30 p.m. at Scotiabank Saddledome.  It’s Calgary’s first action following a 12 day layoff.  Dutton’s Lounge is open for pre-game lunch service beginning at 12:30 p.m. until the opening face-off while under Government of Alberta COVID-19 restrictions all concessions will be closed during the game.  Fans must also wear a mask at all times.  Calgary is coming off a 4-2 home ice win over Medicine Hat on January 2.  Riley Fiddler-Schultz led the way with a pair of goals with singles from Adam Kydd and Blake Allan.  The Hitmen enter play tied for seventh in the Eastern Conference with Swift Current at 31 points while Prince Albert is ninth just a single point back with 30.  Under the WHL playoff format, the top eight teams in each conference qualify for the post season.

PRINCE ALBERT: Today is the second of four regular season meetings with the Raiders. Prince Albert leads the season series 1-0 thanks to a shootout win on home ice in December. It’s their first meeting in Calgary in over 23 months as the Hitmen edged the Raiders 2-1 in their last visit on February 7, 2020.  That night Josh Prokop and Riley Fiddler-Schultz provided the goals for the home side while goaltender Brayden Peters made 39 saves in a first star performance.  Keagan Slaney (1g, 1a) leads the Hitmen in the season series with two points while Cale Sanders (1g, 1a) and Keaton Sorenson (1g, 1a) are the top performing Raiders also with two points each.  The two clubs will meet again on Tuesday, February 8, this time back at Art Hauser Centre.

Dec. 11, 2021 in PA: Raiders 4 Hitmen 3 Shootout…Prince Albert scored the only two goals of the shootout.

LET’S GO: Today kicks off a busy stretch of four games in five days and a run of six games in nine days for the Hitmen.  It also follows a schedule which saw the team play only three times in the last 26 days.

STREAKS: Blake Stevenson (3g) has scored in each of his last two games and is on a three-game (3g, 4a) point streak.  Rookie import Maxim Muranov (3a) has points in back-to-back games.

BROTHER BATTLE: Today’s game features a sibling rivalry, a head-to-head meeting of Blake and Nolan Allan.  Blake, with the Hitmen, has played 170 career regular season games in the WHL while Nolan has appeared in 111.

FAST FACTS: Calgary has fired 38 or more shots on goal in four consecutive games…The Hitmen are 6-3-3-2 in their last 14 games…Riley Fiddler-Schultz is second in the WHL in shots on goal with 143 and is tied for sixth in game winning goals with four.  Sean Tschigerl tops the league in shorthanded markers with five.  Brayden Peters is fourth in the WHL in minutes played at 1,493 and fifth in saves with 695…Calgary is 5-1-0-1 against the East Division…Zac Funk has at least one shot on goal in all 28 of his games this season.

UPCOMING GAMES: Calgary is back on home ice tomorrow, Sunday, January 16 against the Brandon Wheat Kings.  Game time at the ‘Dome is 4:00 p.m. The Hitmen will then hit the road for three straight with stops in Regina (Jan. 18), Moose Jaw (Jan. 19) and Swift Current (Jan. 21) before returning home to host Moose Jaw on Sunday, Jan. 23 in a 4:00 p.m. start at Scotiabank Saddledome.