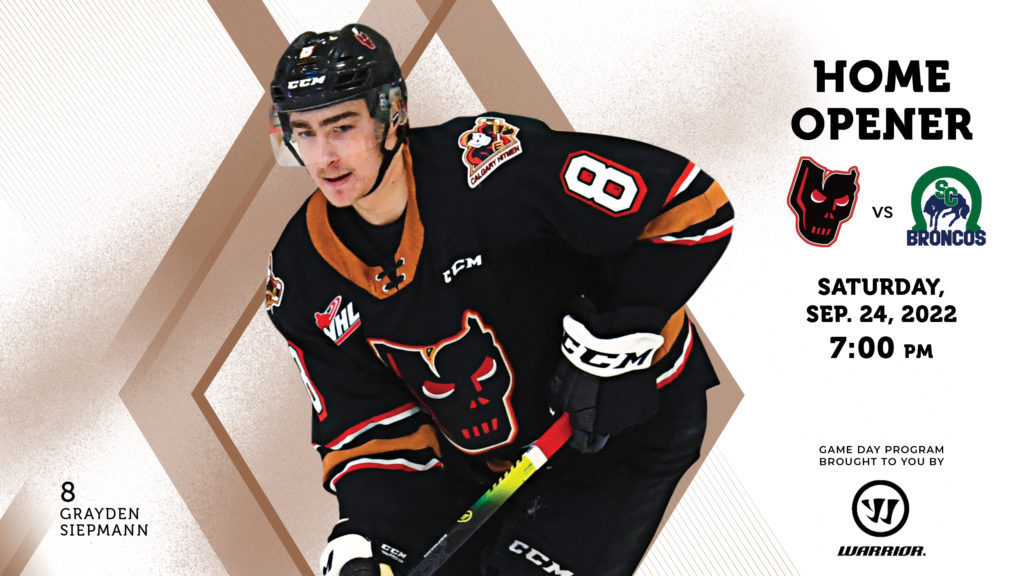 HITMEN HEADLINES: The Calgary Hitmen (1-0-0-0) play their 2022-23 Western Hockey League home opener at Scotiabank Saddledome tonight against the Swift Current Broncos (0-1-0-0).  Game time is 7:00 p.m. Be sure to take advantage of the $6 Hitmen Happy Hour from when doors open at 6:00 p.m. up until the opening faceoff.  Items include pizza, burgers, hot dogs, 14-ounce beer, highballs and 5-ounce house wine all for $6 each.  Home opener highlights include a special pre-game ceremony featuring player introductions.

SWIFT CURRENT: Tonight is the second of five regular season meetings between the two Central Division rivals. Calgary edged the Broncos 2-1 last night in the regular season opener in Swift Current. Carson Wetsch and Maxim Muranov supplied the Hitmen goals while defenceman Grayden Siepmann added a pair of assists.  Muranov’s tally 2:55 into the third period broke a 1-1 tie.  Calgary is 3-2-0-0 in their last five home games against Swift Current.  The two clubs won’t meet again until Wednesday, Dec. 7 back at InnovationPlex.

Sept. 23/22 in SC: Hitmen 2 Broncos 1…The Hitmen never trailed as Ethan Buenaventura made 18 saves to record the win.

INSIDE THE NUMBERS: Matteo Danis, Carson Wetsch and Carter Yakemchuk all had three shots on goal each last night in Swift Current to top the Hitmen.  Oliver Tulk was the team face-off leader winning 15 draws while Steel Quiring was next with seven wins.

2022 PRE-SEASON RECAP: Calgary went a perfect 4-0 during their four-game exhibition schedule.  Defenceman Carter Yakemchuk led the team in scoring with six points (6a) while David Adaszynski (2g, 2a), Zac Funk (2g, 2a), Carson Wetsch and Matteo Danis (1g, 3a) all notched four points each.  Prospect Christian Francis led the goaltending department with a 1.44 goals against average.

PLAYER SPOTLIGHT: Matteo Danis returns to the Hitmen roster this season after starting the 2020-21 campaign with the club.  Danis played the balance of last season in the Alberta Elite Hockey League with the AAA U18 Calgary Royals where ne notched 32 points (11g, 21a) in 34 games to finish second in team scoring.

ALUMNI REPORT: Brooks Macek is in the KHL with Yekatrinburg Automobilist.  In 10 games the 30-year-old forward has 15 points (6g, 9a) to lead the team in scoring.  Macek played parts of three seasons with the Hitmen finishing with 80 points (32g, 48a) in 70 games during his final season of 2012-13.

UPCOMING GAMES: Calgary will enjoy a full seven-day break before their next game against Connor Bedard and the Regina Pats on Sunday, Oct. 2 at Scotiabank Saddledome.  The 2 p.m. start is also the first Sunday Funday of the season, presented by Brookfield Residential.  In addition to $2 food and beverage specials all game long, look for concourse activities from Telus Spark, and a cast of characters outfitted by the Costume Shoppe.

TICKETS:  Fans can still purchase a season pass for the 2022-23 campaign which sees a per game cost of $20.09 for adults, $12.50 for seniors and $10 per child.  It includes 27 regular season home games at the ‘Dome, six games at Seven Chiefs Sportsplex, a $50 C of Red Card, a Wranglers ticket, a Roughnecks ticket plus several other exciting offers.  Find full details at hitmenhockey.com/cgyhockeyclub.