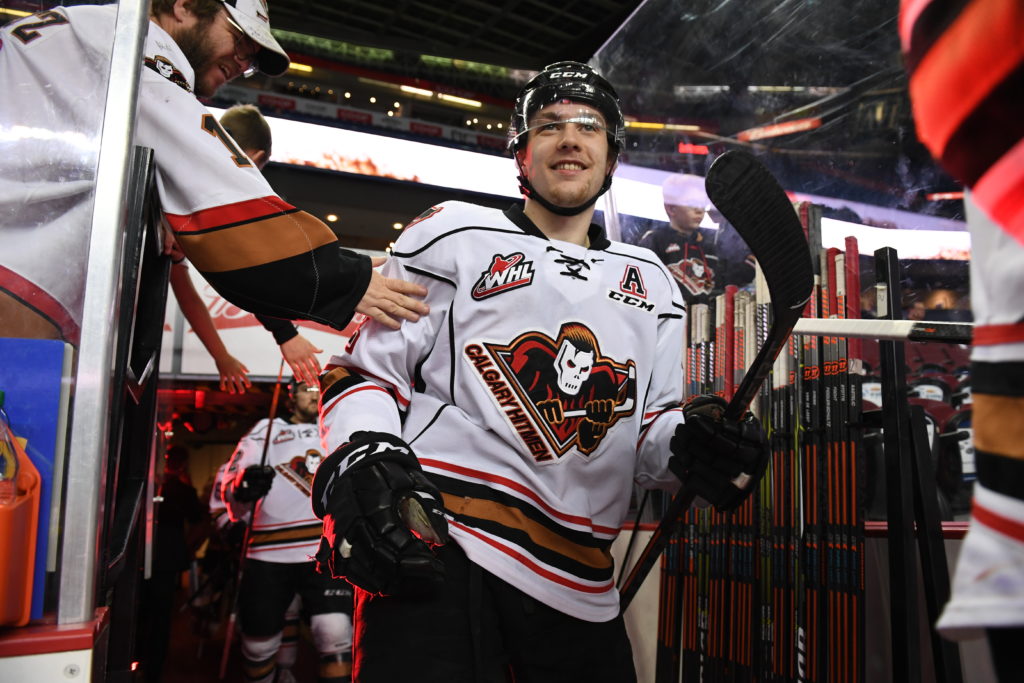 Graduating Hitmen defenceman Dakota Krebs reflects on the easy process of choosing the University of Calgary to join the Dinos men’s hockey team.

“I wanted to stay close to home and the U of C gave me a really good opportunity to play there, after talking with the coaches it seemed to be the right fit.”

“I was accepted to the Haskayne School of Business program and I am pretty excited about that,” exclaimed Krebs.

The product of Okotoks appeared in 308 regular season games during a five-year WHL career.  It started at age 16 with the Tri-City Americans in September of 2015 before a January 2018 trade to the Hitmen.

The possibilities in school are now endless.

The WHL Scholarship is a fully-guaranteed with no requirement to play university hockey to qualify.  WHL grads can apply the funding to any post-secondary or career-enhancing program of his choice, including trades schools or professional career training programs.

“I didn’t even realize all of the perks to the WHL Scholarships going into it, it is pretty unbelievable all of the costs that are covered and the opportunities we are given to use for post-secondary and I am very thankful,” explained Krebs.

Established on a league-wide basis in 1993-94, over 6,400 WHL Scholarships have been accessed, representing an investment of over $28 million by WHL Clubs. This past season, WHL Clubs contributed in excess of $2.8 million to 402 WHL graduates who utilized the WHL Scholarship.

Given the uncertainty of university hockey during the current Covid-19 pandemic, the Dinos season is aiming to start in January.  That could be discouraging for some but the former Hitmen Alternate Captain isn’t looking at it that way.

“I am really liking the extra time to work on my off-season program, it helps with all the small injuries I have gained along the past few seasons to give it a rest and take the time to get in better shape,” said Krebs.

Krebs is one of eight players in 2020 Dinos Men’s Hockey Recruiting Class for the upcoming season.