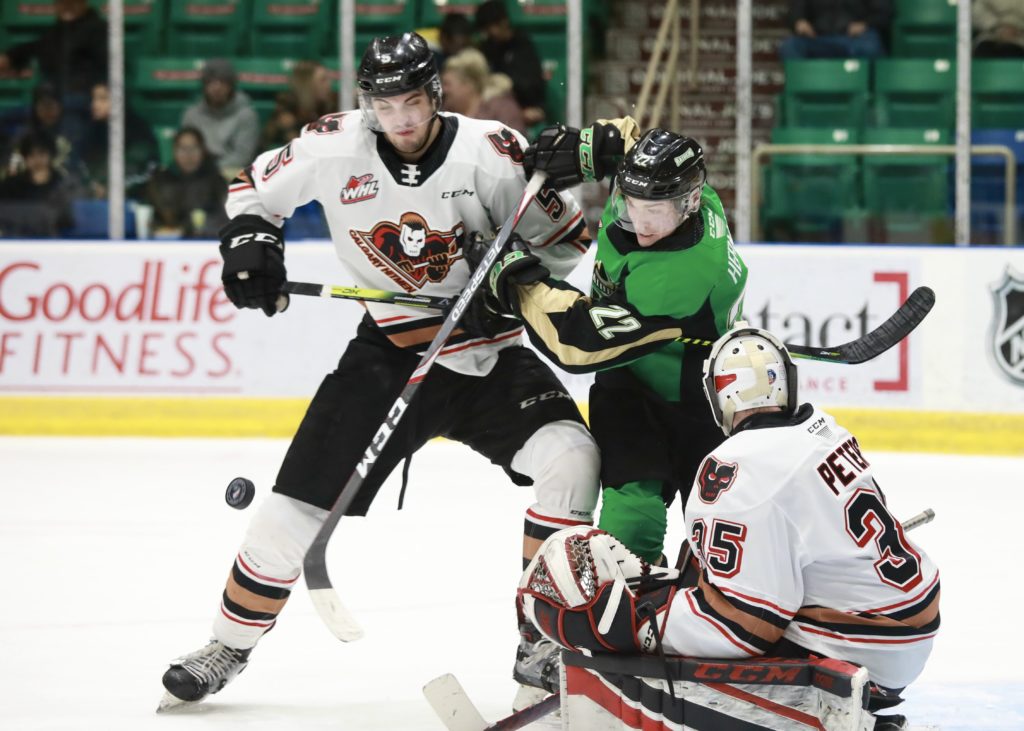 Three out of four ain’t bad.

On the heels of a back-to-back to start the road trip, the Hitmen came up just short in a 5-4 overtime loss to the Prince Albert Raiders Sunday night.

Four different Hitmen found the back of the net as Blake Allan, Riley Stotts, Adam Kydd and Josh Prokop provided the markers. Goaltender Brayden Peters ended the contest with 22 saves for the visitors.

At the other end, Prince Albert saw Ozzy Wiesblatt score both the game tying and winning goal 1:12 into overtime while Brayden Watts also scored twice. Kaiden Guhle added a single marker and goaltender Boston Bilous made 15 saves in the win.

After the Raiders opened the scoring on the power play, the Hitmen were tasked with another penalty kill but Blake Allan fought hard to force a turnover at the blueline and then raced in alone snapping a low wrist shot to tie things up.

The Raiders would then take a 2-1 lead into the third and that’s where the game was blown wide open.

They had to wait two periods, but the Hitmen finally were given a man-advantage and would strike as Stotts one-timed a shot from the top right circle to even it up three minutes into the stanza. It took the Raiders just three minutes after the Stotts marker to regain the lead but the Hitmen didn’t go down easy.

With eight minutes to go, Kydd picked up a loose puck in the slot and found the top left corner for his third goal of the season, followed by the older Prokop brother crashing the net and deflecting a Dakota Krebs shot-pass to give the Hitmen their first lead of the night.

It didn’t last long however as Wiesblatt took matters into his own hands circling in before firing a wrister past Peters to force the extra session. The younger Wiesblatt brother would then strike on a two-on-one rush in overtime after the Hitmen turned the puck over in the neutral zone to seal the deal.

Both sides were well deserving of a point with the back and forth affair and the Hitmen can build a lot off of the weekend picking up three out of a possible four points on the road.

The club will now have a couple of days to regroup before they are back in action Wednesday night in Regina to take on the Pats to kick start a mini stretch of three games in four nights.