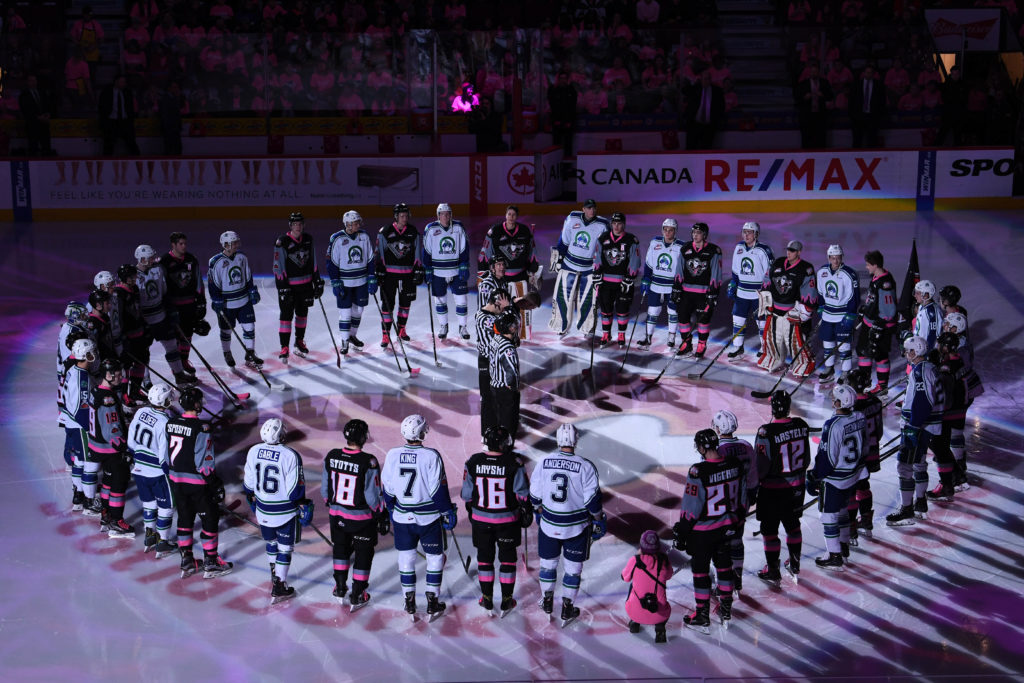 This educational event will see the Hitmen host the Swift Current Broncos on Wednesday, Feb. 27 in an 11:00 a.m. start at the Scotiabank Saddledome.  Over 14,000 Calgary and area students will be in attendance to learn about acceptance and bullying prevention from two guest speakers, concourse displays and in-game activities. Akeem Haynes, 2016 Olympic bronze medalist and self-help author, will speak in the first intermission while Rilee Manybears, athlete from Siksika Nation and ambassador for the AMA Youth Run Club, will address the crowd in the second intermission. Both speakers are presented by A1 Chesney Service Experts.

The game, in its third year, is sold out.

“We are extremely honoured to partner with TELUS on this incredible initiative.  Our players, staff and fans are grateful for the opportunity that we are provided to reach a significant number of youth in our city with an anti-bullying message,” commented Hitmen Vice President and Alternate Governor Mike Moore.  “We are also fortunate to have the commitment and participation of all Calgary and area school boards who make significant commitments and preparations to attend the game.”

“In today’s connected world, being a good sport online is as important as being a good sport on the ice. To help #EndBullying, TELUS Wise offers free resources and workshops for Canadian youth and their parents, some even designed specifically for the hockey community, to learn how everyone can have a positive experience online,” said Nimtaz Kanji, Director of TELUS Wise. “Partnering with the Hitmen to host the BE BRAVE Anti-Bullying Game allows us to educate thousands of Calgary youth on the power of acceptance and kindness in both physical and online worlds.”

Akeem Haynes, 2016 Olympic bronze medalist and self-help author. When he was seven, Akeem and his mother moved to Yellowknife from Jamaica before settling in Calgary at age 10.  In a span of five months they moved seven times and eventually found themselves homeless. With the help of some friends, they were able to get back on their feet.  Akeem became involved in sports, excelling in track and field to win several awards.  In the 11th grade, he started to gain offers from Division I schools in the United States.  While attending the University of Alabama he was named a First Team All-American in 2013 after helping the Crimson Tide’s 4x100m relay team finish second at the NCAA Championships. Haynes helped Canada break a 20-year-old national record to win bronze in the 4x100m relay at the 2016 Olympic Games in Rio.  He has since authored three inspirational books including Love, Life and Legacy, a self-help offering about dealing with hardships, and now uses his story to help others as a successful motivational speaker.

Rilee Manybears, athlete from Siksika Nation and ambassador for the AMA Youth Run Club. Rilee was raised in Siksika Nation, Alberta. After the passing of his father he suffered from depression, but used his diagnosis as motivation to begin running. In high school, Rilee excelled in cross-country running and represented his school in several provincial competitions. Manybears competed in the 2014 North American Indigenous Games in Regina winning gold in the 3,000m race, and bronze medals in both the 1,500m race and the 6 km cross-country event.  He also competed in the 2015 World Indigenous Games in Brazil winning gold in the 8 km race.  In 2016, Rilee was diagnosed with Wolf Parkinson’s White Syndrome, a condition that causes a rapid heartbeat. He had corrective surgery and once again competed in the World Indigenous Games.  Also that year, Manybears became the first Siksika Nation’s member to complete the Boston Marathon.  Rilee is an ambassador for the AMA Youth Run Club and uses his journey to help motivate youth as a speaker.  He recently returned from training in Kenya with some of the best long distance runners on earth and will return to Africa to train this spring.