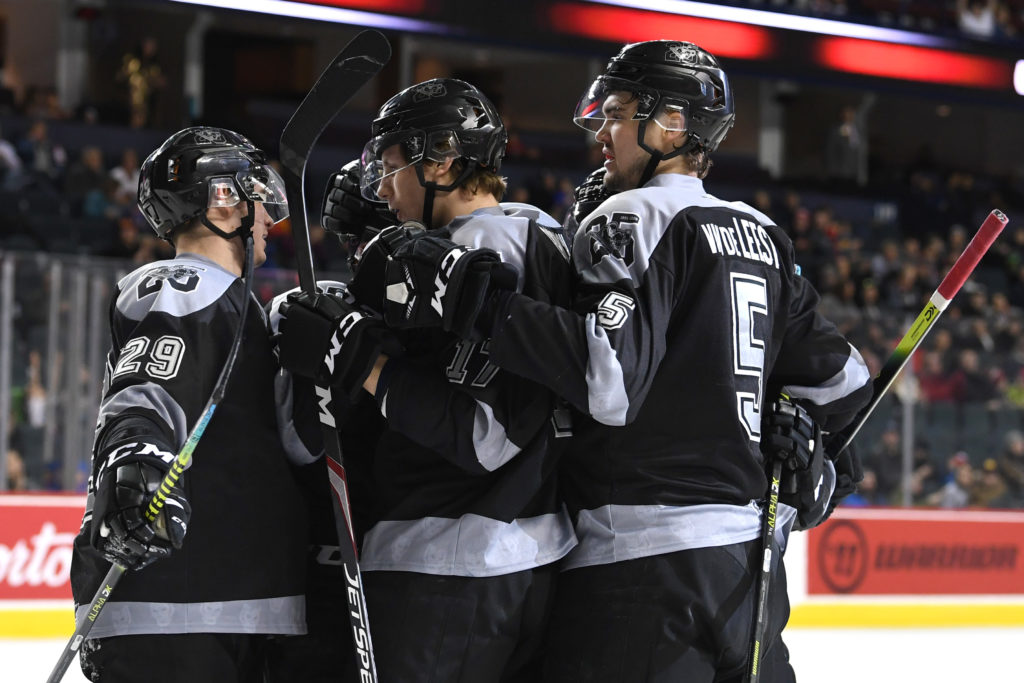 The Hitmen wrapped up their three-game home stand with a 3-1 win over the Swift Current Broncos Sunday afternoon at the Scotiabank Saddledome to improve to 21-13-4-1.

They stuck with it and in the end were rewarded.

“There’s no easy nights in this league,” head coach Steve Hamilton said. “You are going to have to play hard against a team like them every time. We continued to battle and found some success in the second period.

“Our bottom six were the drivers for us today which was great to see. This is where our depth really shines and helps make us a more complete team.”

Orca Wiesblatt, Blake Allan and Connor Gabruch provided the markers while Brayden Peters turned in another stellar performance ending with 24 saves for his seventh win of the season. One of the highlights of the night for the netminder was a penalty shot save in the second period.

Jaxan Kaluski provided the lone goal for the visitors with goaltender Isaiah DiLaura being the busier of the two netminders, ending the tilt with 42 saves.

“It was a back and forth affair and the guys made it easy for me getting sticks in the way and limiting their scoring chances,” Peters said. “Those goals were huge for us to get some momentum going and made my job easier in not worrying about being down a goal in such a close game.

“Penalty shots aren’t too much fun but I’ve had two of them in my career which coincidentally have both been against these guys. They don’t really happen too often but when they do you have to be ready.”

After outshooting the Broncos 16-8 in the opening 20 minutes, the Hitmen weren’t able to break the game open until the middle frame at 5:51, courtesy of Orca Wiesblatt who fired a one-time into the cage after a little give and go with Jett Woo to put the home side up.

Just under two minutes later, Allan would extend the lead as he was all alone with DiLaura and snapped a shot low glove side for his sixth of the year. On the play, newly acquired forward Conrad Mitchell picked up his first point with his new team, drawing an assist on the goal.

Halfway through the stanza, it was time for another new member to shine.

With the Hitmen cycling the puck in the Broncos zone and keeping them on their heels, all the relentless pressure would pay off as Gabruch snapped a wrist shot low blocker side for his first goal as a Hitmen in his first game with the club.

“I was a little bit nervous,” Gabruch said. “As the game went on I got more comfortable with my linemates and had a lot of fun. “Everyone was great in helping me get up to speed in the game plan and the expectations of how to play as a unit and I’m excited to get more games under my belt here.

“I want to make a difference when I can and help the team in any way.”

A five-game road trip is now on the horizon for the Hitmen, which will kick off in Swift Current Wednesday night in another key divisional clash.

After a busy seven games in ten days coming out of the holiday break, its right back to a jam packed schedule with four games in five days on the road.

“It’s always good to go on the road as a group,” Hamilton said. “With some new faces it’s nice to spend time on the bus heading out East to get the guys closer together.

“We’re going to have some tough stretches but if you ask them, they love to play this often.”