Hitmen Clawed Out In Overtime 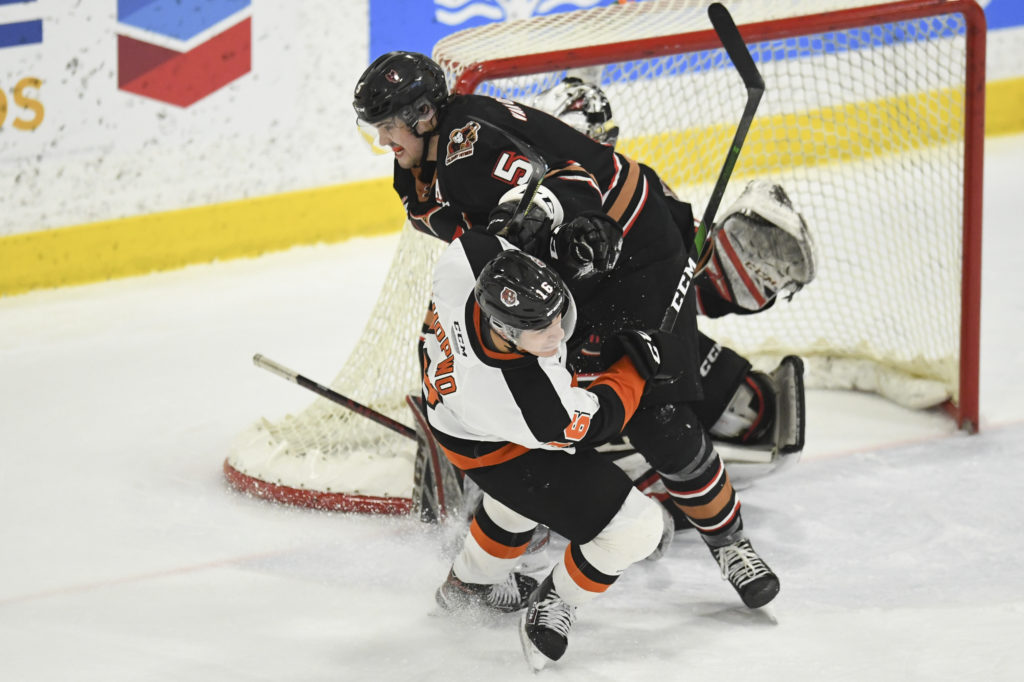 There was no quit till the very end.

Saturday night at the Seven Chiefs Sportsplex on Tsuut’ina Nation saw the Hitmen fall just short in completing a comeback with a 5-4 overtime loss to the Medicine Hat Tigers.

Despite the setback, the club showed a ton of resiliency coming back on two different occasions in the contest after trailing by two-goals in the first and third periods.

“They kept chipping away and were staying positive on the bench,” head coach Steve Hamilton said. “We roared back and never gave up, I like how hard we fought.

“We never want to our guys to have built in crutches, we want to challenge ourselves and tonight was a big test. These games have been a good for us playing against a club like that, matching their pace of play and having that push back.”

Adam Kydd scored a pair of goals with Blake Allan, Josh Prokop and Riley Fiddler-Schultz rounding out the scoring. Goaltender Brayden Peters came in relief in the first period making 29 saves in the loss, replacing Jack McNaughton who made two saves on four shots.

“Sometime you have to do that to provide shock value or a boost for the guys and they responded right away,” Hamilton said. I liked that we came out to get a push and took a 3-2 lead after that and it was the jolt that our guys needed after going down by a couple so early.

“We need to be extremely mindful in not letting them set the tone over again and playing in the defensive on our heels, we need to implement our game earlier.”

Brent Kemp scored twice, including the overtime winner on a breakaway with 17 seconds left in the extra session, to lead the Tigers to their ninth win of the season. Corson Hopwo, Tyler MacKenzie, Teague Patton and Lukas Svejkovsky chipped in with singles while goaltender Beckett Langkow ended with 31 saves.

With the loss the Hitmen move to 5-6-2 on the year as they look to bounce back Monday night back in Medicine Hat for a 7 pm start for the last meeting of the season against the Tigers. After playing three-in-three weekends for the majority of the season to start, Sunday will be a much needed day off for the group especially with them rolling out just five defenceman for the past three games due to injuries on the backend.

“Three-in-three weekends are tough on the body but this now gives us a chance to get some rest and correct some things,” Kydd said. “We don’t want to go out every game giving up goals and having to battle back, but with that said it’s nice knowing that no matter the score, this group doesn’t give up.

“We need to head into Monday more prepared and motivated to get the two points.”