Hitmen Close Out The Decade With A Win 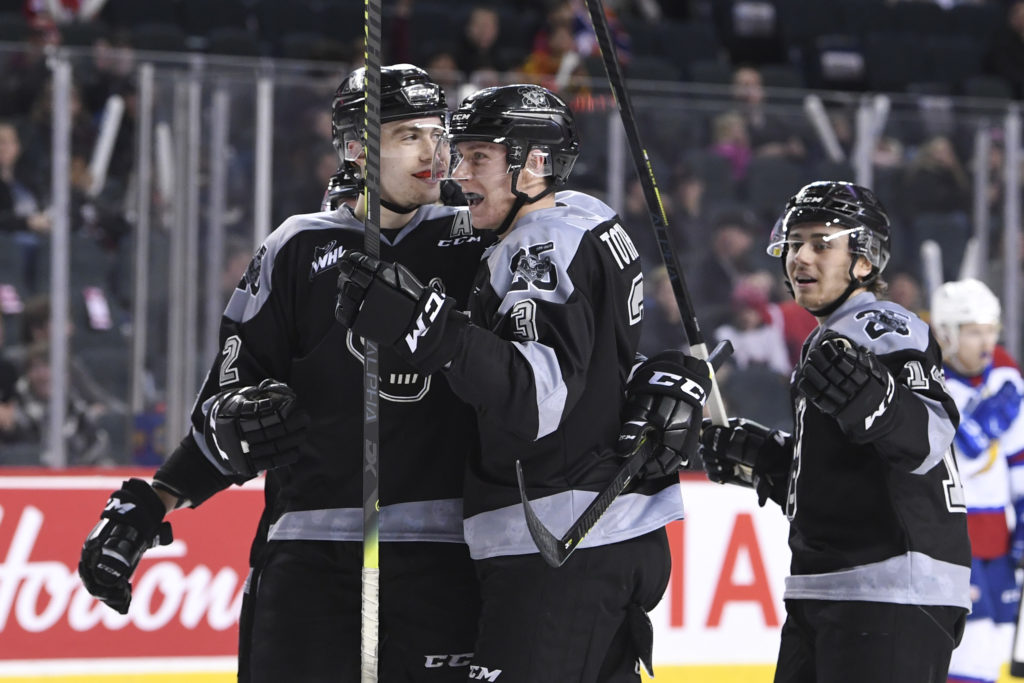 Closing out the decade with a bang!

It was quite the entertaining affair at the Scotiabank Saddledome Monday night as the Hitmen defeated the Edmonton Oil Kings 5-3 in the final meeting of the season series between the clubs.

This game had it all, and how sweet it was to wrap up the year with a win.

“It was an important two points for us,” head coach Steve Hamilton said. “We’ve gone through tough lessons more than once of how to close things out and tonight is a step in the right direction in consistently accomplishing that.

“We talked a lot on how important the ‘we’ is and putting the ‘me’ needs aside. It’s a willingness to block shots, work hard and make smart decisions with the puck. All of that benefits the ‘we’ and a theme we’re going to come back to consistently.”

Carson Focht, Sean Tschigerl, Evan Toth, Orca Wiesblatt and Jett Woo all found the back of the net with James Malm and Josh Prokop chipping in with a pair of assists each. Goaltender Jack McNaughton played a strong game ending with 29 saves.

For the Oil Kings, Jake Neighbours, Vladimir Alistrov and Josh Williams scored, while Sebastian Cossa ended with 21 saves in the loss.

The Hitmen have had their struggles against their rivals, but tonight they would not be denied.

“It feels fantastic to get the win over them,” Toth said. “They’ve had our number but we worked hard and made the right plays to come out on top.

“We had a lot of younger guys step up and that was huge for us to get contributions from everywhere and have a full team effort overall.”

After the Oil Kings jumped out to a 1-0 lead just a 1:34 into the tilt, the Hitmen scored three unanswered goals all started with Focht firing a wrister from the top of the left faceoff circle for his 17th of the season.

Tschigerl would then give the home side a 2-1 lead in the middle frame, as he crashed the net and put home a rebound with Tyson Galloway picking up his first career WHL point with an assist on the marker. It was then time for another first as Toth scored his first career WHL goal just six minutes later going bar down into the top left corner.

The Oil Kings didn’t go away however, scoring twice two minutes apart with less than four minutes left to go in the stanza. But 41 seconds after the game was knotted up, Wiesblatt gave the Hitmen the lead right back off a pretty tic-tac-toe play on the power play that proved to be the game winner.

“I think everyone could feel it on the bench and in the room that we weren’t going to give up that lead again.” Kastelic said. “Everything that happened in the past is far over with and we just focused on playing to our identity and sticking to the game plan.

“Everyone fought to the last buzzer to get the two points.”

Woo would then score on another power play halfway through the third frame that sealed the deal, as the Hitmen now improve to 17-11-4-1 on the season.

There’s little time to enjoy the victory, as they will be right back in action on New Year’s Day kicking off a stretch of four games in five nights.

“We’re coming out hot,” Steve Hamilton said on the busy sked. “We have to manage our time well but I think the guys like to play this much and prefer that over my practices.

“It’s a busy time of year but it’s nice to get into the routine of playing frequently to ride the wave of momentum.”