Hitmen Come Up Big In Game 3 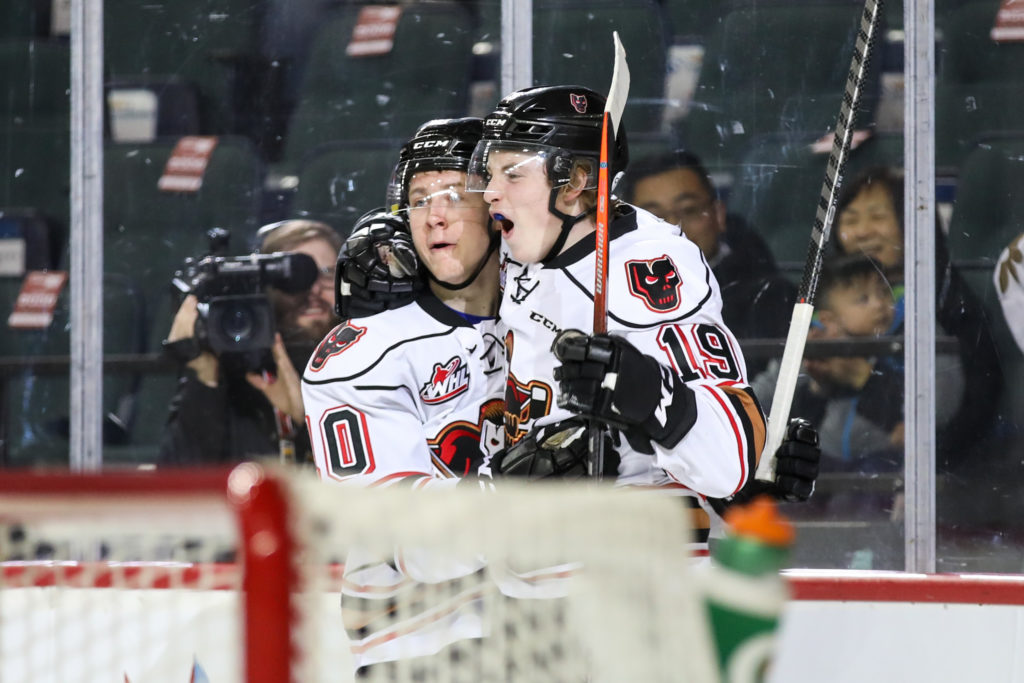 They’re right back in it.

The Hitmen took care of business in Game 3 and now trail the best-of-seven series 2-1 after a 5-3 win Tuesday night at the Scotiabank Saddledome over the Lethbridge Hurricanes.

It was a big game as they avoided looking down at a 0-3 whole and showed what they are made of.

“It was a critical time and it essentially was a Game 7 mentality,” head coach Steve Hamilton said. “We weren’t concerned about what happened in the past and the guys were determined to come out and get the job done.

“It was a must win and I’m proud of the guys for stepping up like they did.”

On the other end, Dylan Cozens struck twice and Zack Stringer chipped in with a goal in the loss. Carl Tetachuk ended with 31 saves.

Right from the gecko, the Hitmen were relentless on the forecheck playing with urgency and were rewarded as Korczak and Focht would score in under five minutes and just over a minute a part from each other to give the Hitmen a 2-0 lead headed into the second.

The Hitmen would jump out to a 3-0 lead thanks to Prokop’s second period marker before the ‘Canes would strike twice to make things interesting headed into the third.

But the Hitmen were not going to be denied a win.

“We wanted to come out flying and keep our foot on the gas pedal,” Focht said. “Everyone contributed to this win and we are hungry to keep it rolling.

“It’s a big confidence boost to win on home ice and show that we aren’t going to be pushed around.”

From finding the back of the net to the work of the special teams, it was a complete team win.

With a one-goal lead in the dying seconds of the game, it was a frantic finish but the Hitmen how badly they wanted it by sacrificing their bodies with a handful of blocked shots.

“It was definitely crazy,” McNaughton said. “It’s nerve wracking when time is winding down and it’s a 6-on-5 but it makes it easier when you have your teammates laying everything on the line.

“This win feels amazing and I think our start and our play late in the game was a big difference maker.”

And just like that, this series has gotten a whole lot more interesting.

Game 4 is set for Thursday night at the Scotiabank Saddledome with an opportunity for the Hitmen to even the series up.

“We can enjoy this win probably until heading off to bed and then it’s right back to work tomorrow,” Hamilton said. “It’s a quick reset and making sure that we continue to have a short memory.

“It’s a fresh start headed into Game 4 and we need to play in the moment.”