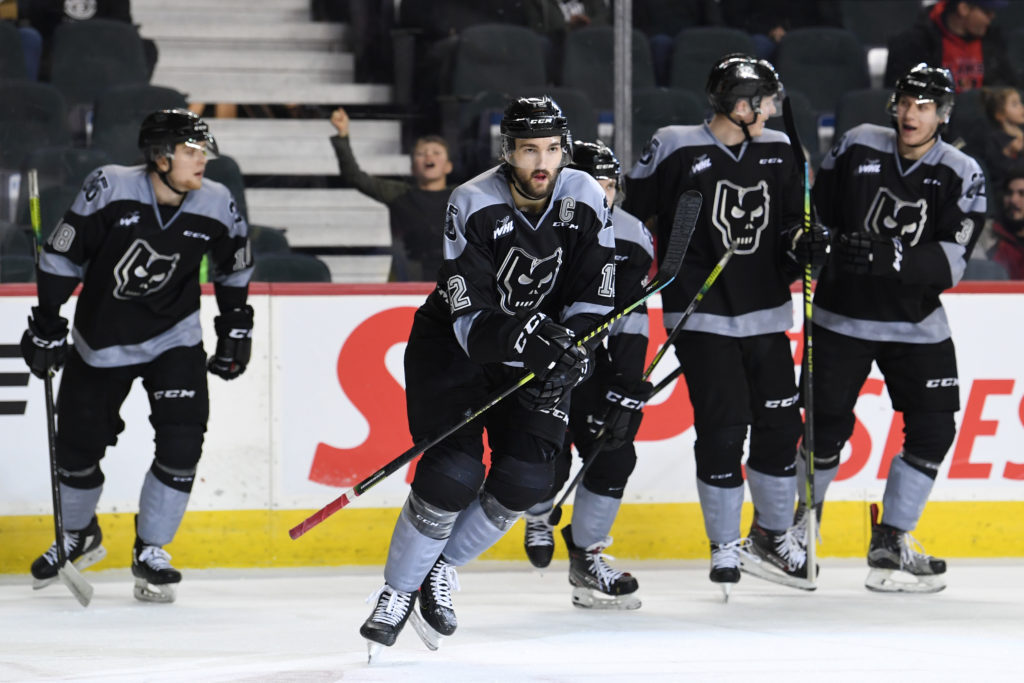 There was no quit.

It wasn’t the result they wanted but you can’t deny the effort as the Hitmen dropped a high-scoring battle by a 6-4 score to the Lethbridge Hurricanes Sunday afternoon at the Scotiabank Saddledome.

When they seemed down and out they fought back.

“I was proud of them, they played very hard,” head coach Steve Hamilton said. “It was a high octane game with a lot of chances and I thought our guys were great in fighting back into it.

“We never gave up and were really positive in our approach. There are areas we want to clean up, but that’s part of the game. Overall they answered the bell giving the circumstances with an excellent effort.”

Mark Kastelic scored a pair of markers to move into the top ten in franchise points with 216 points, while Jett Woo and Carson Focht provided the other Hitmen markers. Brayden Peters made 19 saves in just his second loss in his past eight starts.

The ‘Canes saw six different goal scorers chip in with Calen Addison, Oliver Okuliar, Alex Cotton, Ty Nash, Brett Davis and Zack Stringer finding the back of the net. Goaltender Bryan Thomson made 33 saves to backstop the visitors to victory.

This one was just another in the long list of classics between the rivals.

“Instead of focusing on the negatives we focused on the positives and that was a smart tactic to give us confidence the rest of the way,” Kastelic said. “It’s a bit of the same story as last year with the rivalry and intensity. This is a game we want to remember to put in our back pocket and fuel us.

Lethbridge jumped out to a 2-0 lead just over 13 minutes into the contest before Woo would find an answer on the power play as Orca Wiesblatt found the defender backdoor and delivered a picture perfect pass that Woo was able to one time for his seventh of the season.

Just when the Hitmen seemed to have got their feet under them after a flat first period, two goals 2:25 minutes apart in the middle stanza by the Hurricanes saw them take a 4-1 lead into the final 20 minutes.

But the Hitmen came roaring back.

Focht would cut the lead in half as he walked into the zone and fired a wrister into the top right corner which was then followed up with Kastelic snapping a hard shot past Thomson with still 10 minutes left to go.

The captain would then strike again under two minutes later with another unstoppable wrist shot to bring the game back to even.

But just as it seemed momentum was on their side, a breakdown in the defensive end led to Davis potting home the winner with the visitors then adding an empty-net tally.

“There a lot of good things to build off of and we showed a lot of character,” Woo said. “This game fuels the fire to when we’ll see them next but until then we just want to focus on what we can clean up and take it one step at a time.

“Once we started playing our game that’s when we found success.”

The Hitmen will have a couple of days to reset as they look ahead to Wednesday night as the Regina Pats pay a visit to the ‘Dome.

No doubt it’s a big game before hitting the road for a five-game B.C. trip.

“We talked all year long how important the process is and where we want to be,” Hamilton said. “We need to do the things that we identify as a team to buckle down to get the job done consistently.

“We’ve been playing well as of late and there’s a lot to be pleased with.”