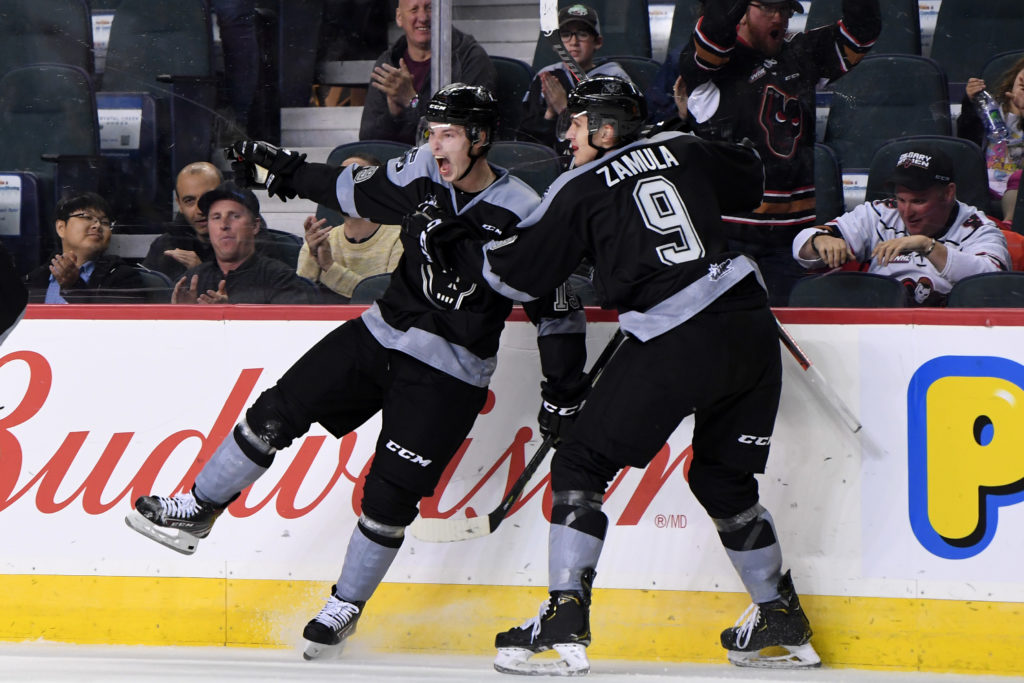 The comeback kids still got it.

Friday night at the Scotiabank Saddledome saw the Hitmen down the Edmonton Oil Kings 4-3 in overtime to pick up their first win of the new season.

Down but not out, they were determined to get the victory.

“We got tired of being pushed around,” head coach Steve Hamilton said. “We took a lot of beatings from them last year and at some point you need to figure out who you need to be to change things around.

“We did that in the second period to turn the tide around by playing a more heavy game and played to our identity. We were gritty and it was a big win for us.”

Carson Focht tallied two goals, including the overtime winner, while James Malm had a team-high three points to lead the offensive charge. Josh Prokop added a goal and assist with Egor Zamula chipping in with a pair of helpers. Sophomore goaltender Jack McNaughton came up big for the Hitmen as he made 21 saves including a handful in the final minutes of the third period.

“We didn’t come out how we wanted to but we had a lot of motivation to not start off with a loss against them especially with how things went last season,” Malm said. “We know that we have that spark of if we can get a goal, we can get plenty more and know we are never out of a game.

“It feels good to start the weekend off with a win and hopefully we continue to roll.”

After the Hitmen fell behind with two quick goals in the opening twenty minutes, things turned drastically for the last two periods of regulation.

Thoroughly outworking their opponents, the Hitmen were finally able to solve Scott as Prokop deflected his first of the season to cut the lead down to one.

Five minutes later, the home side would strike again on the powerplay courtesy of Malm showcasing his usual soft mitts to even things up.

Pause in action so let’s take a look at the work of a magician 🚨🚨🚨 #CGYvsEDM #25Together pic.twitter.com/ug1jIoSyql

The Oil Kings were able to pull ahead late in the second stanza but once again the Hitmen found the equalizer thanks to Focht to force the extra session.

For the second game in a row, 60 minutes solved nothing but this time, there was a better ending as Focht would take a feed from Malm and fire a wrist shot into the top corner for the two points.

“It was a bit of a marathon shift for me,” Focht said. “We were caught in our defensive zone a bit and I was about to change but opportunity arouse so I just made the most of it.

“We know we our a great team but sometimes we don’t know just how good we can be. Tonight showed that with our ability to put the puck in the net and how resilient we are, we can do some special things.”