Hitmen Complete The Comeback Over Broncos 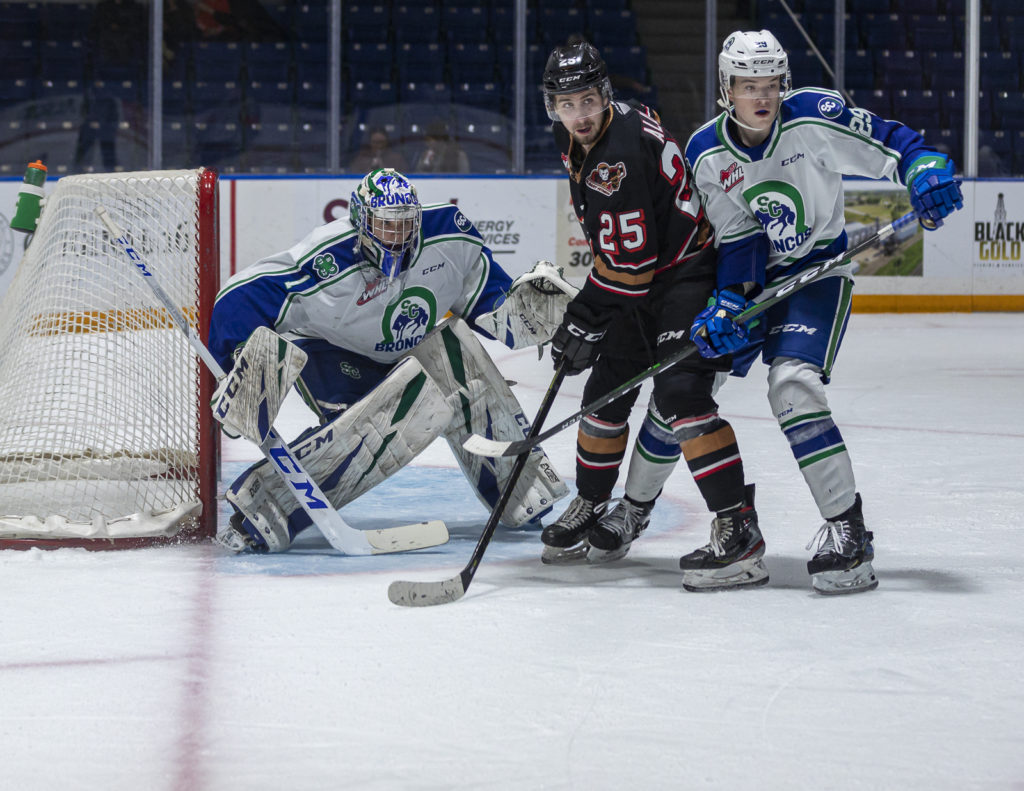 There was no quit.

The Calgary Hitmen kicked off the five-game road trip with a thrilling 4-3 shootout win over the Swift Current Broncos Wednesday night, picking up back-to-back wins over their divisional opponents.

They were down but not out, as the Hitmen were able to comeback from a 3-1 deficit in the third period to improve to 22-13-4-1 on the season.

Carson Focht tallied a pair of markers while Cael Zimmerman provided the other goal in regulation time, as Josh Prokop was the only shooter to light the lamp in the shootout. Jack McNaughton made 19 saves to pick up his 14th win of the campaign.

Jaxan Kaluski also scored twice while D-Jay Jerome scored once for the home side. Isaac Poulter was a busy man making 50 saves and a big reason why his club earned a point.

All it took was 2:15 into the contest to see the first goal of the game as Focht would take advantage of a hard bounce off the end boards that came right to the forward’s stick and left him with the easy tap in marker.

The Broncos provided the quick reply four minutes later as Jerome provided space for himself with a toe drag deke, finishing off the play with a shot over the right shoulder of McNaughton. Swift Current would then take the lead on a 5-on-3 advantage as Kaluski was left alone at the side of the net for his first of the night.

Kaluski’s second came on yet another 5-on-3 advantage halfway through the second period leaving the Hitmen stun headed into the locker room for the second intermission. They had their chances but nothing would get by and were left frustrated with numerous blocked shots.

But then the third period was a different story.

Outshooting the Broncos 21-2 in the final 20 minutes, the Hitmen were able to capitalize on their chances as Zimmerman got the visitors going halfway through as he snuck a wrist shot just in the inside of the post to provide some much needed momentum.

Four minutes later, Focht threw a shot through a maze of bodies that this time found its way in to force extra time for his 21st of the year.

Both sides saw a couple of prime chances in overtime but the goaltenders stood tall to decide the game in a shootout. All it took was one goal as McNaughton stopped all three shooters, and Prokop made sure the comeback was completed sneaking a shot past the sprawled out Broncos netminder.

The Hitmen will now gear up for a three-in-three weekend that gets underway Friday night in Brandon with a clash against the Wheat Kings, before wrapping it up with back-to-back games in Winnipeg for the first time against the ICE.