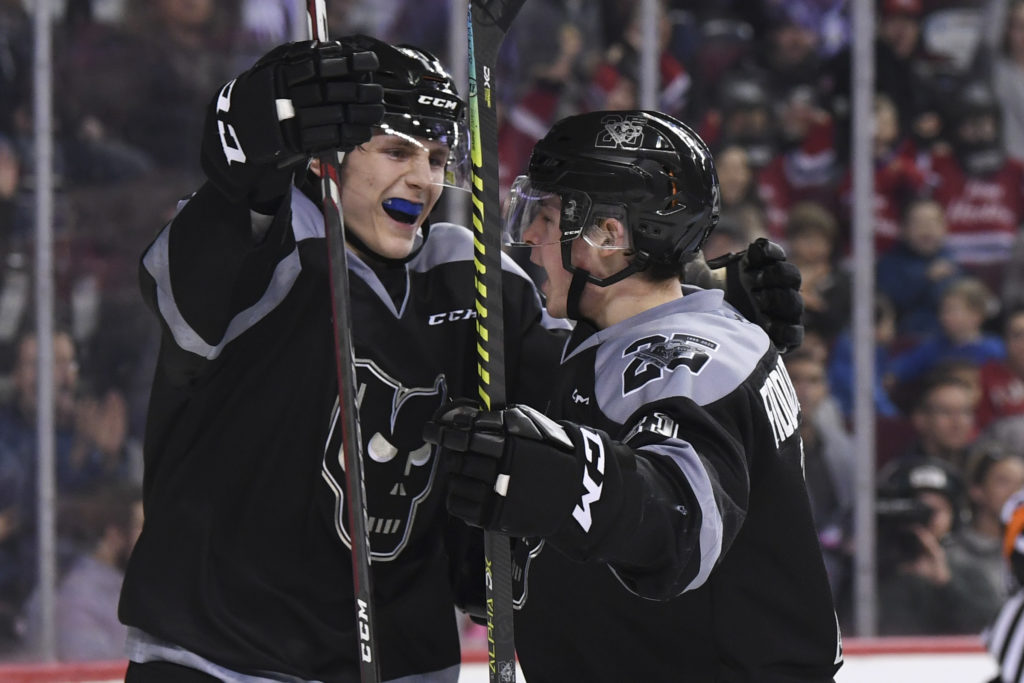 Picking up where they left off.

The Hitmen completed the weekend sweep with a 5-2 win over the Red Deer Rebels Sunday afternoon at the Scotiabank Saddledome, extending their win streak to three games.

Starting off a five-game home stand with a win like that couldn’t be any more perfect.

“Both games I thought we were steady throughout and got contributions across the lineup,” Steve Hamilton said. “We have to work hard for our offence and work for our goals, with that it’s important for our team defence to improve to be a consistent team.

“Timely offence and good goaltending were the keys for us this weekend.”

Riley Stotts and Mark Kastelic for the second night in a row were the drivers offensively each with a two point performance to follow up the three point night they had Saturday in Red Deer. Stotts had a goal and an assist while Kastelic chipped in with two helpers, Dakota Krebs, Riley Fiddler-Schultz, Orca Wiesblatt and Josh Prokop rounded out the scoring. Brayden Peters made 23 stops, including a pair of breakaway saves to pick up his ninth win of the year.

Zak Smith and Jayden Grubbe replied for the Rebels as Byron Fancy made 24 saves in the loss.

“We want to get as many points as possible in divisional games and we took care of business this weekend,” Stotts said. “They are a hard working team and it was important for us to stay focused and keep the foot on the gas.

“Four lines the better, we aren’t just relying on two lines to win us games and that’ll be huge for us the rest of the season and headed into playoffs.”

For Krebs, the opening goal was the first of the season for the overager, as he unleashed a slap shot into the back of the cage just over a minute into the second stanza to get the goals rolling for the Hitmen.

And everyone was just as pumped as the defender when the red light flashed.

“I was a little shocked and then fired up,” Krebs laughed. “A lot of emotions came out of me because I’ve been waiting on a goal for a while and it was awesome. Anytime you have your teammates cheering you on like that makes it that much more special.

“Every time he would rip the puck in past games we would jump up hoping it would go in,” Stotts added. “It was awesome to see it go in and everyone was excited for him.”

After Stotts made it a 2-0 game with a wrist shot into the top right corner, Smith struck a minute and a half later but the Hitmen went right back on the attack, with Fiddler-Schultz capitalizing on a loose puck sitting behind the Red Deer goaltender 38 seconds later to restore the two-goal lead.

Two goals in 1:09 to start the third frame sealed the deal, first with Wiesblatt going to the wrap around for his 16th of the season which was then followed up with Prokop firing a one-timer in the low slot past Fancy.

The outlook now shifts over to Wednesday night for the Hitmen and their clash against the Winnipeg ICE to start off a stretch of three games in four days.

“We like our team and we like the way we’ve been playing as of late,” Hamilton said. “If the scenarios were to play out today, the next two teams we play could be first round opponents for us which makes things that more interesting.

“It’s a very meaningful home stand with a lot of good teams rolling through, we need to be ready.”