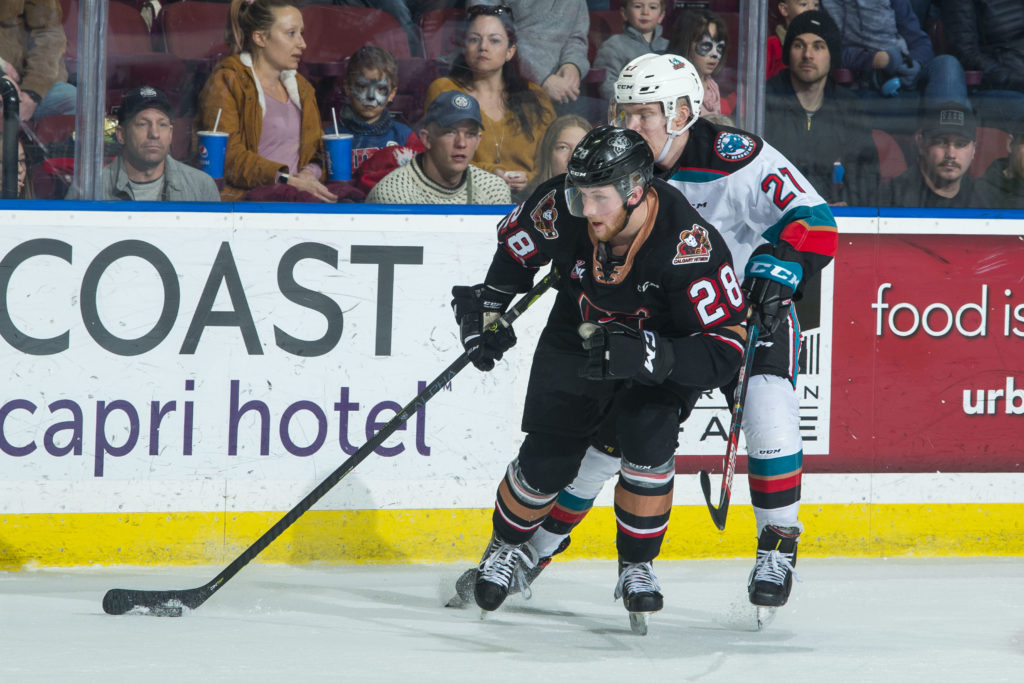 Never count them out.

The Hitmen picked up their third straight win and 31st win of the season Monday afternoon with a thrilling 6-5 overtime win over the Kelowna Rockets, after trailing 5-1 headed into the third period.

Down but not out, they climbed out of the hole and completed the comeback.

Josh Prokop scored 2:31 into extra time while Carson Focht and Kyle Olson both scored a pair of markers in the final 20 minutes to force the extra session. Riley Fiddler-Schultz provided the other Hitmen goal while Jack McNaughton came in relief of Brayden Peters and needed just seven saves for the victory.

Conner McDonald, Matthew Wedman, Alex Swetlikoff, Ethan Ernst and Dillion Hamaliuk provided the goals for the Rockets and Roman Basran made 32 saves in the loss.

It was a complete flip of the script for the Hitmen as Kelowna would score five times in the middle frame with Fiddler-Schultz’s deflection goal at 14:16 the only thing they were able to get by Basran as the Hitmen were staring at a steep climb trailing 5-1.

They’ve made comebacks before, but this one will be one to remember for years.

Olson would get the visitors going as he was in the right place to tap home a rebound shot into the cage less than four minutes into the period which was then followed up by Focht capitalizing on the power play five minutes later with a shot that went off a Rockets defender and into the net.

You could feel the momentum start to swing as the Hitmen continued to press with Olson again lighting the lamp, this time with a wrist shot through a maze of skates with six minutes to play to set up a frenzy finish.

With the goaltender pulled, the Hitmen worked the puck around and found an opening as Mark Kastelic delivered a picture perfect cross crease pass to a wide open Focht who made no mistake to tie the game up at five.

Overtime saw the Rockets come up with three attempts to end it but it was the Hitmen on their lone shot of the extra frame that would skate away with the two points. Jett Woo corralled a loose puck and then sent Prokop in on a partial breakaway with a tape to tape pass which saw the forward capitalize on, as he snapped a wrister into the low left corner to end it.

Five unanswered goals, it doesn’t get wilder than that.

The Hitmen will now enjoy a day off before returning to action Wednesday night to take on the Victoria Royals for the third stop of a five-game B.C. road trip.