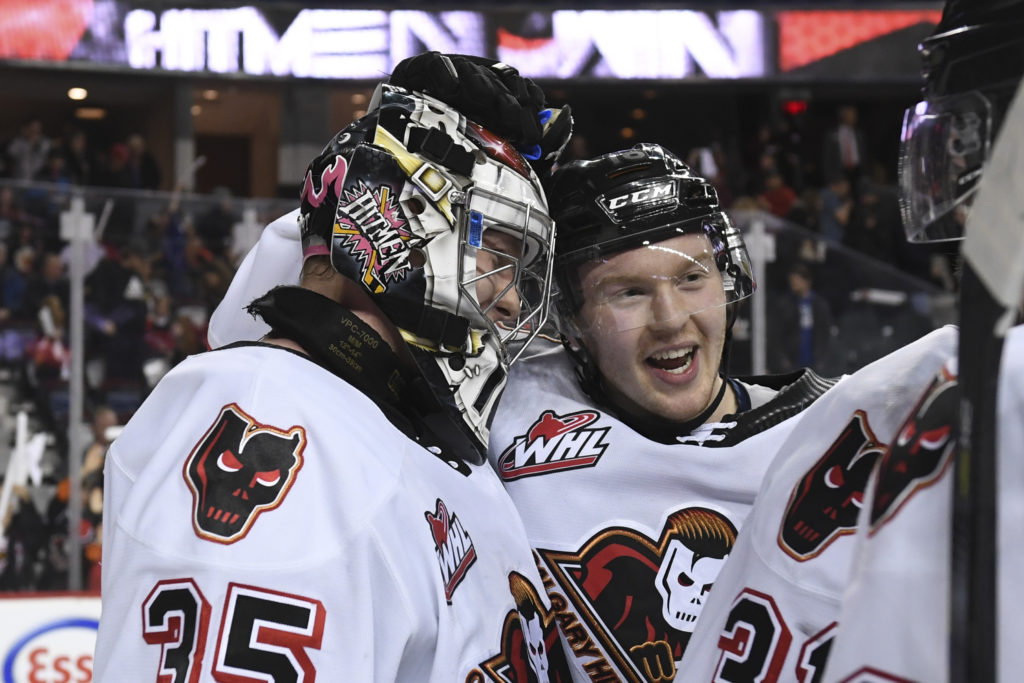 Don’t look now, this group is on fire.

The Hitmen ended the five-game home stand on a high note with a 2-1 win over the Prince Albert Raiders Friday night at the Scotiabank Saddledome to pick up their sixth win in their last seven games.

This one had all the makings of a playoff game.

“It had the intense feel throughout and a good hockey game overall,” head coach Steve Hamilton said. “Both sides had chances and that’s what you expect when you bring two really good teams together. We knew it was going to be a tight game and we got the job done.

“Every night we want to be hard to play against and find areas in our game to grow and get better.”

Brayden Peters put on a show, as the rookie goaltender made 39 saves which included 17 in the final 20 minutes to pick up his 12th win of the season. Josh Prokop and Riley Fiddler-Schultz provided the goals as the Hitmen improve to 28-16-4-1.

Brayden Watts was the lone Raider to find the back of the net and Max Paddock made 26 saves in the loss.

Don’t let the low score fool you, this clash was as fast paced as they come with chances going both ways and plenty of animosity and intensity in what could very well be a potential first-round playoff matchup.

“We stuck to our game plan and played to our identity,” Prokop said. “Against any top division team it’s going to have that pace and intensity. Everyone knew coming in what we had to do and we were ready for anything.

“We set the tone early and buckled down in the defensive end.”

All the Hitmen damage came in the first period, with Prokop starting things off just four minutes into the clash as Riley Stotts found the winger alone at the side of the net and Prokop made no mistake putting his 13th goal of the season into the cage. 10 minutes later on a two-on-one rush, Sean Tschigerl was stopped on the initial shot but Fiddler-Schultz was at the right place at the right time to tap home the loose puck for a 2-0 lead.

The lone goal of the second frame came off a faceoff play as Watts would find the puck off the scramble and fire into the top corner through a maze to cut the Hitmen lead in half.

They Hitmen knew a storm was coming in the third and but they stood tall and held down the fort. With the Raiders net empty and a delay of game penalty issued, the Hitmen were staring at a tall order with a 6-on-4 disadvantage but key blocks and key saves were the difference makers.

“The key was to treat it as any other play,” Peters said. “We just wanted to kill as much time off as we could and not dwell on having to be down two guys. It was pretty evenly matched game and we worked hard to get the win.

“I just took it one shot at a time. You can’t let your mind wander because that’s when you get in trouble. The team did a great job in front of me getting in front of shooting lanes and helping make my job easier.

It’s now off the Red Deer to take on the Rebels as the three-in-three weekend rolls on. Starting it off with a win was goal number one, now it’s time to take care of business against a divisional opponent.

With the roll they have been on, they have no plans of slowing down.

“We want to keep the pedal to the metal,” Prokop said. “We know we have a great team. We can score, we can defend, it’s just finding the consistency in our game.

“The biggest thing is not getting away from our game and focus in on the little details.”