Hitmen Cruise To Victory Over Rebels 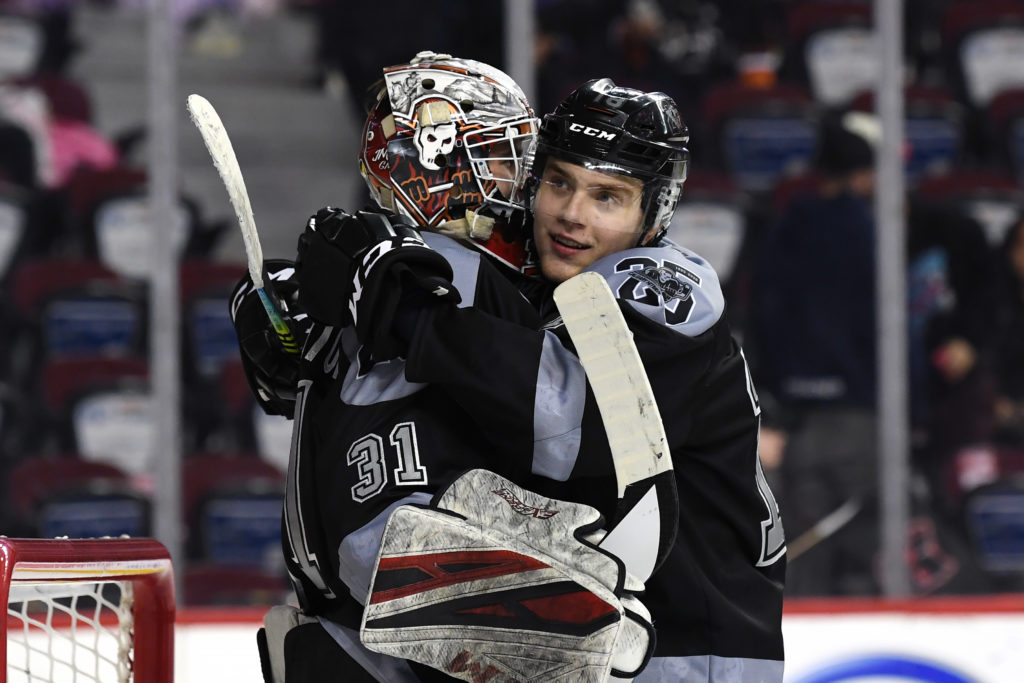 That’s how you bounce back.

The Hitmen put on a dominating performance to rebound from the Friday night setback to defeat the Red Deer Rebels 5-0 Saturday afternoon at the Scotiabank Saddledome.

Once they got their feet under them, they never looked back.

“It was a good team effort,” head coach Steve Hamilton said. “You ride out the momentum of ups and downs in the season and I’m a big believer of staying even keeled. The guys had that approach today and it paid off for us.

Carson Focht and Jackson van de Leest both found the back of the net twice, while Connor Gabruch chipped in with a single marker. Jack McNaughton needed just 14 saves to record his first shutout of the season and 15th win of the year.

Overall, it was a complete flip of the script.

“We kept our game going and forced them to play our style,” van de Leest said. “That breakthrough in the third was a product of our game plan gelling together and gave us the advantage we were looking for.

“We are looking at these games as playoffs games. Every two points is huge for us, we want to be playing our best hockey and excel as we get closer to the post-season.”

A night after failing to score a goal, the Hitmen needed just 100 seconds to turn on the red light as Gabruch finished off the pretty tic-tac-toe play, having the easy tap in goal for his fifth of the season.

Focht would then double the lead on the power play in the second frame, as the Hitmen worked the puck around with Riley Stotts delivering the cross ice feed leaving Focht to finish it off with a shot into the bottom left corner.

Then, they really took over.

The second Focht marker came off an unstoppable wrist shot from the slot six minutes into the third, as the 19-year-old is now tied for the team-lead in goals with Hitmen captain Mark Kastelic at 24.

Two booming slap shots back-to-back by van de Leest put the game out of reach as the defender scored a minute a part on identical plays to bring his goal total to three on the season.

“I think I need to start using a bit more to be honest,” van de Leest laughed. “It’s been a long time coming scoring two goals after scoring my first earlier in the season.

“I’ve been working on it in practice a lot and something I’ve been looking to add to my game and it was just nice to help contribute to the win.”

After the busy week with five games in eight days, the Hitmen will now enjoy a week off before gearing up for a three-in-three weekend starting Friday night against the Prince Albert Raiders.

With a 3-1 mark on the home stand so far, there will be extra motivation to close it out with another win.

“We want to play a more pro game and structured style with the games winding down,” Focht said. “Night in and night out we want to stay consistent and grow as a team.

“We’ve had some ups and downs and times and battled adversity but that’s made us stronger. If we stay the course and keep climbing we’ll be in good shape.”