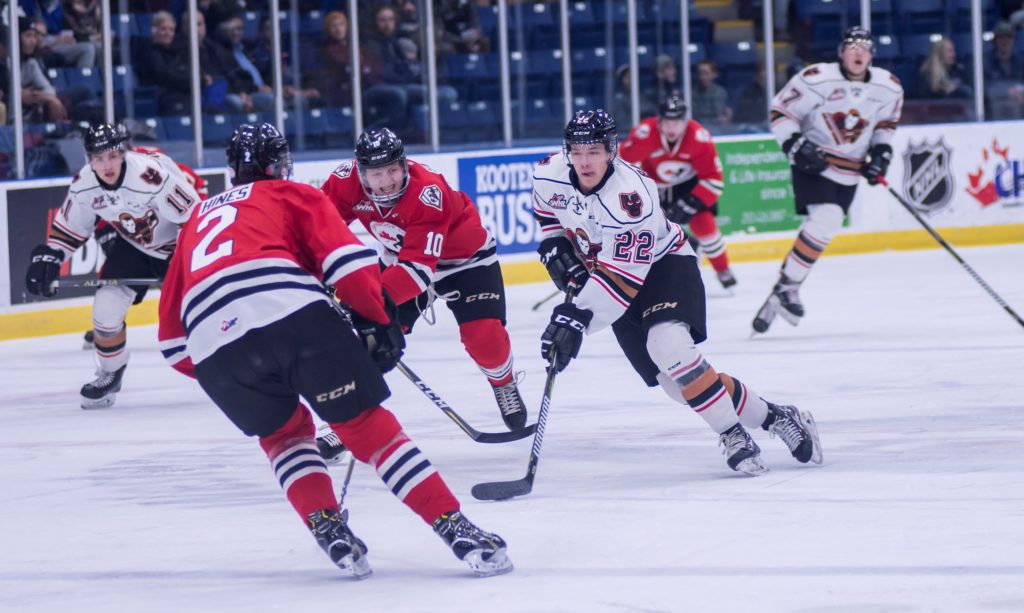 It was a dominant performance.

The Hitmen rolled into Cranbrook with confidence and it showed as they powered past the Kootenay ICE 5-0 to start the road trip.

Duncan McGovern finished with 37 saves on the night, as the Hitmen swept the home-and-home series after Sunday’s 7-3 win at the ‘Dome over the ICE.

The Hitmen were fired up as soon as the puck dropped as they heavily outworked the ICE early on when they were finally rewarded for their play six minutes into the contest when Korczak would pop home a rebound for his first of the night. Just seven minutes later, Kastelic would add to the lead with a perfectly placed wrist shot into the top corner after taking the feed from Kryski in the high slot.

With a 2-0 lead headed into the second frame, the Hitmen continued their strong play but neither side was able to muster up a goal, and the score remained the same headed into the final 20 minutes.

Just like Sunday night, the Hitmen put their foot on the gas pedal and dominated the third outshooting the ICE 19-5 but most importantly, added to their lead with more goals.

Kryski would make it a 3-0 game just 16 seconds into the final stanza, a goal that seemed to suck the life out of the home side and give the Hitmen even more confidence. As the Hitmen continued to attack, frustrations got the best of the ICE as they continued to take penalty after penalty. Krebs would make them pay for it as he wired a slap shot from the point for this third of the season with seven minutes left.

Korczak’s second marker came with 11 seconds left in the contest, as he stuck with the play and tucked away the rebound for his second multi-goal performance in the WHL.

Although he wasn’t as busy in the third, McNaughton was solid all night making timely saves and not giving up second chances as he soundly controlled his rebounds. The shutout comes in just his 11th WHL appearance and he now has back-to-back wins for four victories overall on the season.

The Hitmen will have a quick turnaround as they’ll take on the Spokane Chiefs Saturday night for the lone meeting of the season.