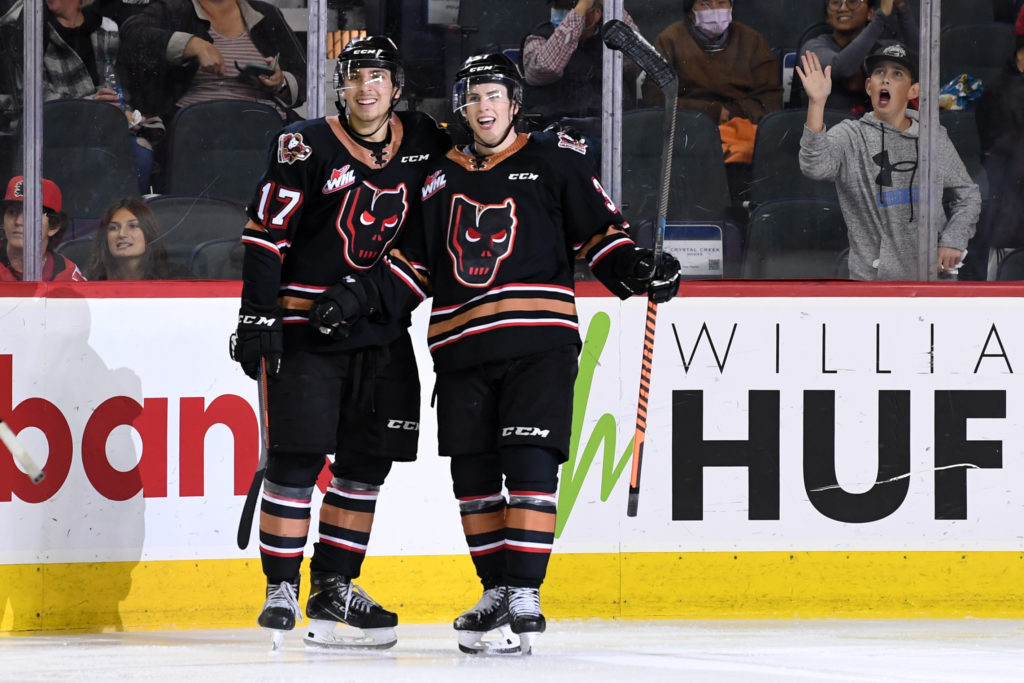 The Calgary Hitmen welcomed the Regina Pats to the Scotiabank Saddledome Sunday afternoon for their first of two meetings this season. Calgary came out victorious in a high scoring game winning 7-3 over the visiting team.

Calgary had another quick start on home ice with Grayden Siepmann opening up the scoring just 14 seconds into the first period. It was followed up just over a minute later with Oliver Tulk’s second of the season to put Calgary up by two. Matteo Danis secured his first WHL goal on the power play going top shelf on Regina’s goaltender Koen MacInnes. Calgary went up by four thanks to Zac Funk and his first of the season near the end of the first period.

Regina finally got on the board at the beginning of the second with one from Jaxsin Vaughn. At the half way mark of the second, Riley Fiddler-Schultz capitalized on a two man advantage for Calgary to restore the four goal lead. Regina got their own opportunity on the 5-on-3 and was able to find the back of the net before securing one more at the end of the period courtesy of an unassisted goal from Tye Spencer.

Tulk wasted no time opening up the third period scoring with his second of the game just 20 seconds in. He then rounded off the day with a natural hat trick putting Calgary up by four. Calgary dominated the final minutes of the game and would go on to win 7-3 win. Total shots finished 46 -27 for Calgary.

Tyson Galloway earned third star with three assists while Oliver Tulk took first star with three goals on the day. Making their debut with Calgary was recent acquisition Jacob Wright who got his first point as a Hitmen in today’s match.

Calgary returns to action on Saturday October 8th in Red Deer versus the Rebels before returning home to welcome the Brandon Wheat Kings on Monday, October 10th.

Fans can still purchase a season pass for the 2022-23 campaign which sees a per game cost of $20.09 for adults, $12.50 for seniors and $10 per child.  It includes 27 regular season home games at the ‘Dome, six games at Seven Chiefs Sportsplex, a $50 C of Red Card, a Wranglers ticket, a Roughnecks ticket plus several other exciting offers.  Find full details at hitmenhockey.com/cgyhockeyclub