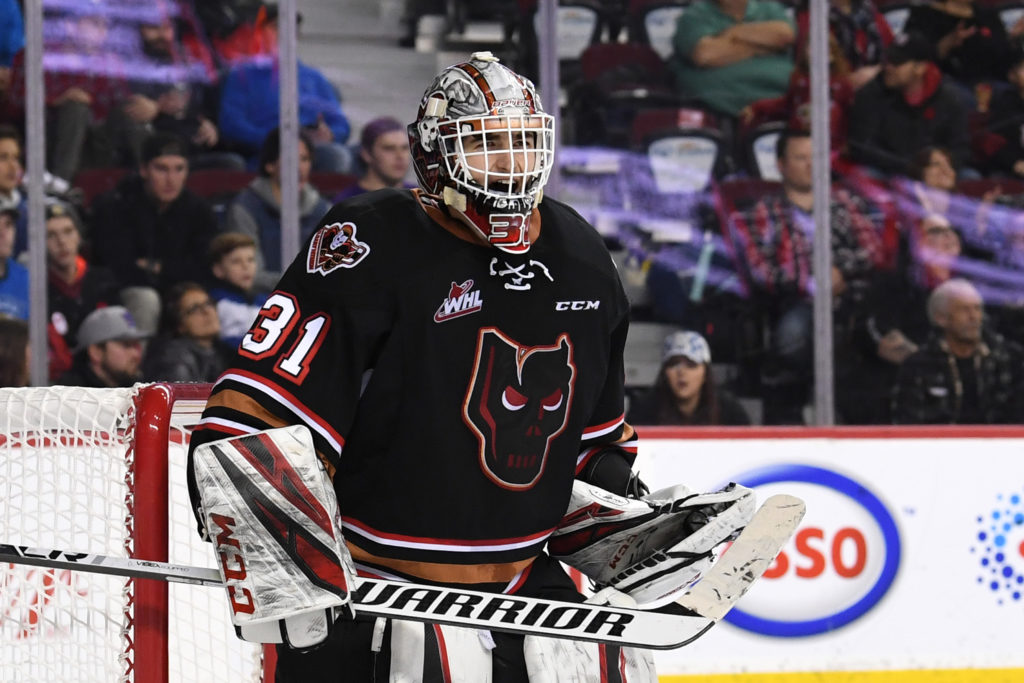 There was no denying them the win.

The Hitmen put on a show for the final home game of the month with a 7-3 win over the Kootenay ICE Sunday afternoon at the Scotiabank Saddledome.

Despite a bit of a scare midway through the final period, they put their foot on the gas and never let up.

“Anytime you get secondary scoring it’s huge,” head coach Steve Hamilton said. “We have an expectation to have scoring come from all of our lines and it was nice to see it emerge today.

“Our response was right away and impactful which helped us finish the game off. I liked that our guys recognized the importance of not losing composure and staying the course.”

Riley Stotts (2G, 1A) and James Malm (1G, 3A) combined for seven points, while Carson Focht’s career-high four-point night (1G, 3A) propelled the Hitmen to the win over their Central Division rivals. Egor Zamula, Tye Carriere and Mark Kastelic also found the back of the net for the Hitmen. Goaltender Jack McNaughton put on a strong performance ending the contest with 29 saves for his third win on the season.

“It’s always frustrating when you lose a one goal game when you fight hard for 60 minutes so it was good to get this one in the way we did,” Stotts said. “We are going to learn from this game and take it into the games coming up on the road.

“It was huge getting these two points.”

The Hitmen saw their third period lead of 4-1 vanish as the ICE were able to score two goals 41 seconds apart but Carriere would add cushion to the lead just 15 seconds later. The rookie’s second goal of the season provided to be a difference maker as the Hitmen seemed to have the extra jump as they put the game away.

They outshot and outworked their opponent and this time, it finally paid off.

“It seemed like once we got that fifth goal, we just kept going and that’s a huge momentum boost for us,” Malm said. “It’s big to get a win over a divisional opponent and big to get the offensive going like we did.

“I love playing here, it’s a good city and I’m having an awesome time being a member of the Hitmen.”

The Hitmen will now hit the road for a season-high seven game road trip with four games against the U.S. Division, but it all starts Friday night against none other than Kootenay.

“We’ll see a fresh version of them Friday and they’ll make adjustments to get ready for the game and as will we,” Hamilton said. “We have to hit the reset button, have a good week of practice and start off the road trip on a positive note.”