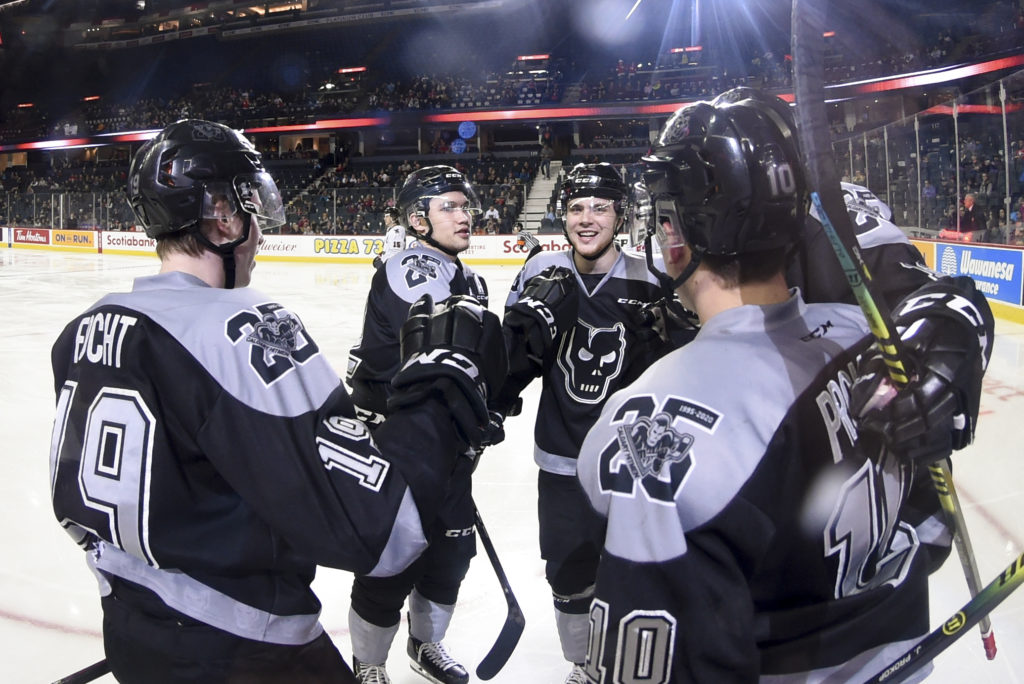 The Hitmen looked as fresh as they come on the back end of a three-in-three weekend cruising to a 7-2 win over the Moose Jaw Warriors Sunday afternoon at the Scotiabank Saddledome.

With 102 shot attempts, and only allowing 18 shots on their net, it was one of the better performances of the year.

“You could tell before the game the guys were excited and that translated over onto the ice as soon as the puck dropped,” head coach Steve Hamilton said. “It’s tough to contain some of our forwards when they are on a roll, the guys got the message of having lots of volume and good things happen when you shoot the puck.”

“We had all four lines rolling and I felt like everyone contributed.”

Seven different Hitmen found the back of the net with Carson Focht, Riley Fiddler-Schultz, Cael Zimmerman, Adam Kydd, Josh Prokop and Evan Toth recording the markers. Luke Prokop set a career high with three assists and rookie goaltender Brayden Peters made 16 saves for his fifth win of the season.

Brayden Tracey and Ryder Korczak scored the lone goals for Moose with Adam Evanoff making 23 saves, allowing six goals before being replaced by Jackson Berry who allowed one goal on 10 shots.

With the win, the Hitmen complete the sweep of the season series against Moose Jaw.

“The third game of a three-in-three is always the hardest but the main goal was to set the tone and don’t let off the gas,” Prokop said. “We’ve had a lot of hockey to come out of the break, but you play for the games and any chance you can get to make the big play or help a teammate out it’s a big confidence boost.

“We tried to keep it in their zone as much as we could in dominating them down low. We’re big strong group and that’s the way we were built.”

It was also a special night for former Warrior Jett Woo, playing against the team he spent three seasons with for the last time in his WHL career, picking up an assist and an absolute hound on the backend.

“I knew it would be the last one going into the game,” Woo said. “I wanted to have as much fun and smile as much as I could. It was even better to get the win and a good game overall.

“We wanted to use our speed and skill which really showed in that first period to set the tone. We know we can work and can have good third periods. To end off on that note coming off a seven in ten is huge for us.”

All it took was 41 seconds for the Hitmen to strike first as on the power play Focht found himself at the right spot to bury the opening marker.

The Hitmen thoroughly controlled the pace of play outshooting the Warriors 8-2 and hemming them in their own zone for most of the opening 20 minutes.

They would finally be rewarded for their dominating play in the second frame, as Fiddler-Schultz took advantage of a fallen Warrior defender to break in alone and snapped a shot five-hole for the 2-0 lead four minutes into the period.

Two minutes later, Zimmerman found himself all alone in the low slot as his initial shot was stopped, but was able to put away the rebound for his first goal of the season after missing the first-half of the year.

The goals just kept on coming as the captain unleashed an unstoppable wrist shot in the slot for his team-leading 21st goal of the campaign.

Before the frame was over, the goal-scoring party wasn’t quite over yet as Kydd pounced on a rebound for his fifth.

Moose Jaw would get two late goals in the period on the power play to cut the deficit to three, but it was all Hitmen once again in the third as the older Prokop brother and Toth would put the game to bed with their eight and second goals of the season respectively.

The Hitmen will now enjoy some down time as they will be idle until Friday night when the Lethbridge Hurricanes visit the Scotiabank Saddledome.

“It’s been a tough stretch of hockey,” Hmailton said. We haven’t had a lot of practice in the last ten days and really focused in on managing our energy. It was a good test for us and I am pleased with how we progressed.

“We have really liked our team all year long and haven’t had the chance to see it at full strength. It’s intriguing to see where we will be with all the guys back and exciting overall.”