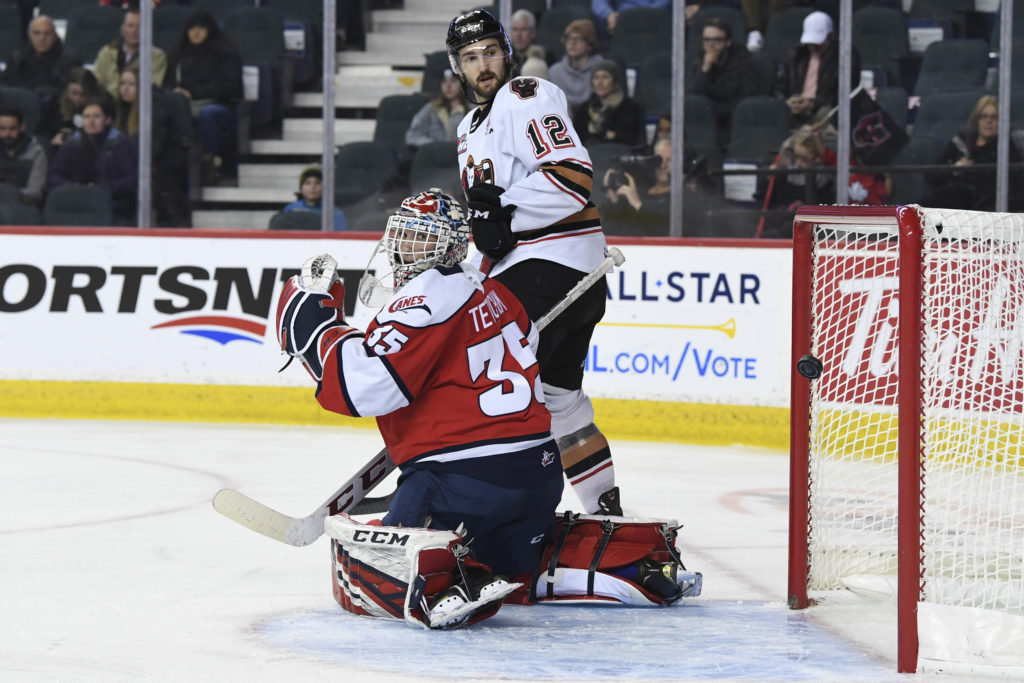 No love lost between division rivals.

Friday night at the Scotiabank Saddledome provided more of the same intensity between two clubs all too familiar with one another. But in the end, the Hitmen fell 4-2 to the Lethbridge Hurricanes suffering just their first loss in their last five home games.

It was a back and forth affair, but the final 10 minutes was ultimately the deciding factor.

“We weren’t very good,” head coach Steve Hamilton said. “We are usually pretty solid at maintaining pressure and pace but tonight the game seemed to be played in mud, there wasn’t a lot of pace for us.

“It’s the most important question as a coach to ask ‘are we moving more towards the consistency that we need very night to win or are we struggling with that?’ Collectively we all benefit from sticking to the game plan and it’s important for us as a group to embrace that. To get complete buy in from your team is a process and we aren’t there yet even though we see moments of it.”

Riley Stotts and Mark Kastelic both had a team-high two points, Stotts with a goal and an assist while Kastelic chipped in with two helpers. Josh Prokop provided the other Hitmen marker while Brayden Peters made 30 saves in his third straight appearance.

Noah Boyko, Dino Kambeitz, Alex Cotton and Oliver Okuliar, into an empty net, provided the markers for the Hurricanes on a night that saw Carl Tetachuk end with 22 saves for the win.

It took just 76 seconds for the game to see its first goal as the ‘Canes would strike off a face-off play but it was quickly answered by the Hitmen as Prokop finished off the odd-man rush with a forehand, backhand move for his ninth of the season to even the game up two minutes later.

After a scoreless second period, the red light would flash four times in the final 20 minutes.

Just two minutes into the frame, Kameitz would tip home a point shot through a crowd to give Lethbridge a 2-1 on the power play but the Hitmen again quickly answer back on a man-advantage of their own, with Stotts firing a laser into the top right corner.

Off broken coverage in the defensive zone, Cotton would one-time a shot past Peters with eight minutes left to go, and this time there was no answer from the Hitmen.

“It was a very passive forecheck in the neutral zone late in the game and once we got set, it wasn’t easy to get anything going,” Kastelic said. “Both sides don’t like each other too much and we know each time we face them it’s going to be a tough battle.

“We played a little too loose in our own zone and that’s something we need to correct moving forward.”

The Hitmen will now look ahead to Sunday afternoon in the first matchup of a home-and-home set with the Swift Current Broncos in another key divisional battle.

“Every game we want to win and be competitive but it didn’t go our way tonight,” Stotts said. “There are easy breakdowns we can fix and I think once we clean up our game in different areas we’ll be more successful on a nightly basis.

“We’ll have a quick reset and not sit too long on this one to get ready for Swift. We want to use that game to build some momentum.”