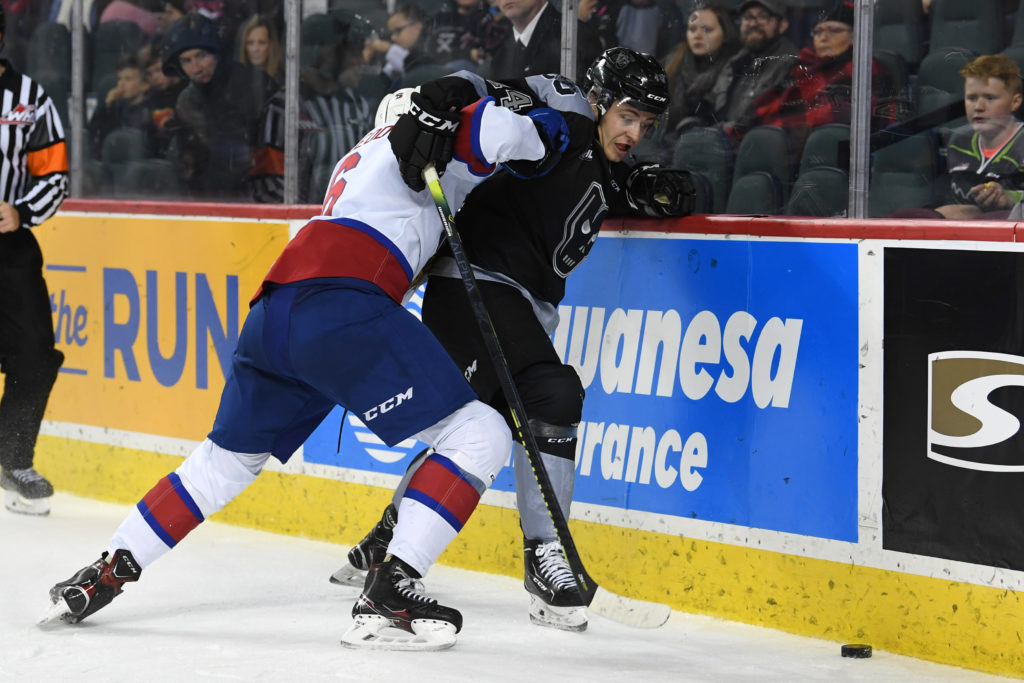 Sunday afternoon at the Scotiabank Saddledome saw the Hitmen drop their third straight game in another one-goal contest by a 3-2 score to the league leading Edmonton Oil Kings.

They knew that they would face adversity at some point and here it is.

“It’s tough to lose like that, I thought we were the better team for 60 minutes,” Carson Focht said. “We’re going through a  rough stretch and it’s better now than later in the season. We always talk about the climb to the top and this is all a part of that process.

“There’s a lot of learning opportunities from these games. It’s good for us to experience these struggles so we can appreciate winning and appreciate what it takes to win.”

Focht and James Malm provided the markers for the Hitmen while Brayden Peters did everything he could to keep the game close, making 25 saves.

Jacson Alexander, Ethan Cap and David Kope all scored for Edmonton while Todd Scott made 38 saves to backstop the visitors to victory.

The Hitmen got off to a much better start as Focht opened the scoring eight minutes into the game, off a quick snap shot in the slot after Orca Wiesblatt delivered a no look pass to the open centreman for his team-leading 10th of the season.

After the Oil Kings tied the game headed into the third, Malm found himself wide open in front of the crease and made no mistake in giving the Hitmen a 2-1 lead with 9 minutes to go. Two goals scored five minutes a part by Edmonton left the Hitmen stunned and saw the game-winner come with just 55 seconds left to play.

“I think everyone struggled last night playing a 200-foot game and today we stepped up and played hard in all three zones,” Malm said. “It leaves you bitter to lose a game that close especially when we had the lead for a bit.

“Brayden played great and he made some big saves which is calming when he’s back there keeping us in a tight game like that.”

Penalty troubles continued on as the Hitmen were banished six times to the sin bin, compared to the two penalties called on the Oil Kings.

The penalty killing unit stood tall only allowing one goal on the six chances but any momentum they were able to gain was immediately killed with the amount of times they were down a man.

“They did their job tonight,” head coach Steve Hamilton said. “It was disappointing to see our penalty kill as much as we did but it happens some nights. It taxes guys over and over again to call on the unit as much as this afternoon.

And now, the focus shifts over to facing the reigning WHL Champions, the Prince Albert Raiders.

It’s another quick turnaround for them to regroup and figure out what is needed to be on the other side of a close game.

“There’s a lot to take away from this weekend and it’s up to us to learn from it and get better for the next game out.”