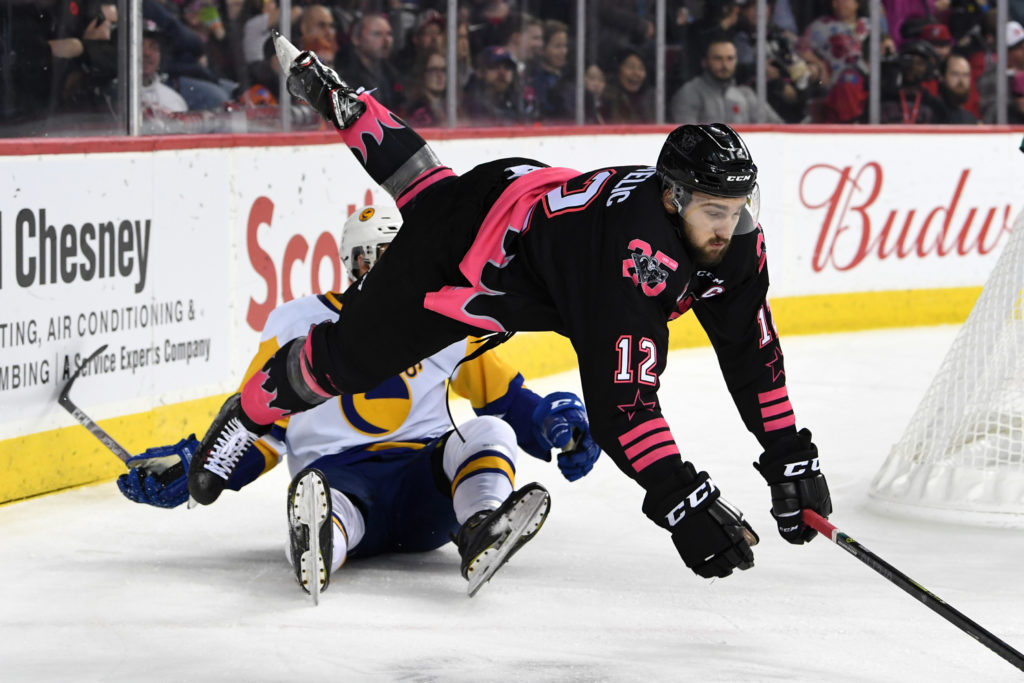 For just the second time this season, the Hitmen have suffered back-to-back losses after a 3-2 loss to the Saskatoon Blades Saturday night at the Scotiabank Saddledome, dropping to 8-4-1 on the season.

It was an odd game where one minute they would control the play, to being stuck in their own zone the next.

“It was disappointing,” head coach Steve Hamilton said. “I thought we didn’t have consistency throughout the lineup. We need to be a better version of our full team. We haven’t seen that, we’ve seen bits and pieces of that but not the full thing. Until we do that, there will be some struggles.

“We’ll need to make some changes.”

Blake Allan and Mark Kastelic scored the markers for the Hitmen while Jack McNaughton made 28 saves in the loss.

Eric Florchuk scored a pair of goals and Tristen Robins added the other Blades marker as the visitors saw Nolan Maier stand tall with 37 saves in the win.

They cleaned things up in certain areas, but not in all.

“We weren’t perfect tonight and some of their goals were products of our mistakes,” Kastelic said. “It’s a learning experience that we have to dig a little deeper and want it more.

“No team is going to give anything to you or make it easy, there’s little room for error and tonight proved that.”

After the Blades opened the scoring in the first period off a rebound shot on the power play, the Hitmen found an answer as Allan crashed the net and found a loose puck in the slot to pop home his first goal since being traded over to the club.

Just 48 seconds into the third, Saskatoon were on the receiving end of a lucky bounce to regain the lead but some strong cycling down low set up a Kastelic one-timer in the slot to even things up again halfway through the period.

Just when it seemed the Hitmen were gaining the momentum, Florchuk snapped his second of the night on the rush with a wrister two minutes later, and it would hold up as the winner.

“At the end of the day we just didn’t get play to our full potential,” Kastelic said. “It’s tough to come up short but we have to learn from this, move on and focus in on facing Edmonton now.

“We are eager to get back out there and turn things around.”

There’s little time to let this tilt digest as the Hitmen will welcome the Oil Kings tomorrow afternoon for s 2 pm start in a key Central Division battle.

“We have to bring our A-game and bring everything we got,” Krebs said. “We are one of the best teams in the league and we have to show that night in and night out.

“It’s a good test for us going up against an overall strong team and we have a lot to prove.”