Hitmen Even The Series 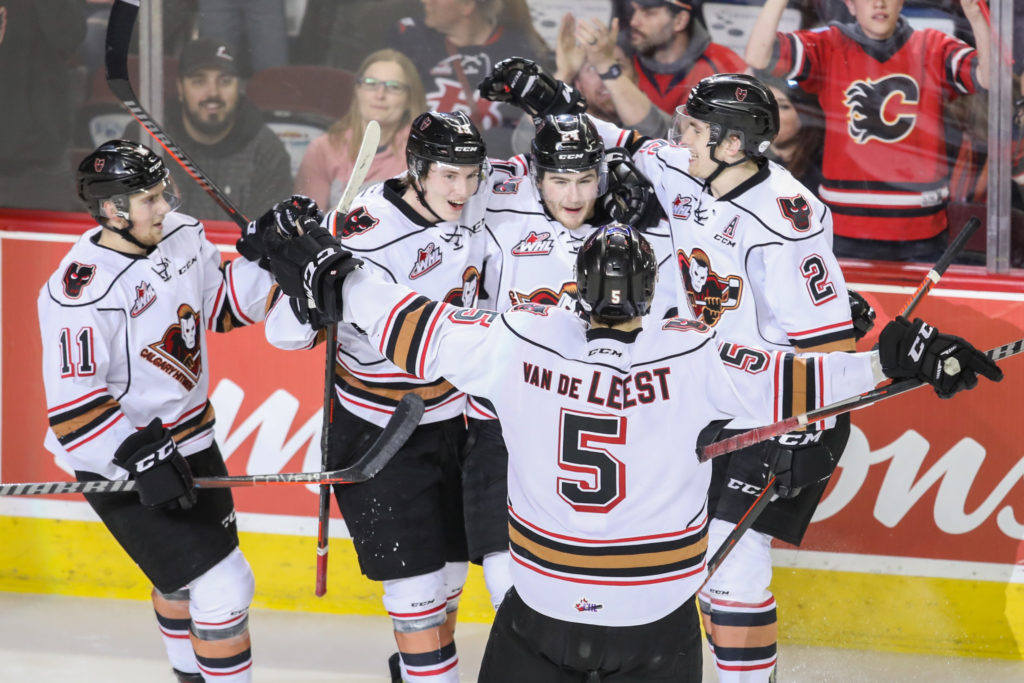 It’s all evened up now.

The Hitmen completed the home sweep after a 5-2 win over the Lethbridge Hurricanes Thursday night to tie the series up at 2-2.

They have battled back from adversity all season and it’s only fitting that they have done it again in the post-season.

“We played it very methodically and scored timely when we needed it most,” head coach Steve Hamilton said. “We frustrated them and paid attention to the details to get the job done and ultimately even things up.”

“Jack we unbelievable tonight and he was the difference maker.”

Five different Hitmen found the back of the net as Riley Stotts, James Malm, Josh Prokop, Vladislav Yeryomenko and Luke Coleman lit the lamp. Stotts three-point night was matched by linemate Ryder Korczak as the 16-year-old chipped in with three assists. Jack McNaughton was stellar in goal stopping 37 shots which included a handful of highlight-reel saves.

The Hurricanes saw their two goals come from Jake Elmer and Logan Barlage, while Carl Tetachuk ended with 30 saves in the loss.

While the offence was rolling at one end, McNaughton was standing on his head at the other and getting some help from his teammates.

“Definitely your ego grows a bit when you make those saves but you can’t let it get to your head,” McNaughton said. “I was keeping calm back there and seeing the guys risking injury by blocking shots from getting to me was great to see.”

“It feels amazing to be rewarded for all our hard work with back-to-back wins.”

Just under two minutes into the final frame, Prokop took a perfect tape to tape pass from Carson Focht to redirect it home to give the Hitmen the lead, and Yeryomenko added some insurance on the power play just four minutes later with a point shot for his first of the post-season. In the dying minutes of the game, Coleman would add an empty-net marker for the second game in a row to seal the deal.

A best-of-seven has now turned into a best-of-three.

“The first couple of games under our belt really helped us out,” Korczak said. “It was real eye-opener for a young team like us but we’ve been stepping up not just offensively but defensively as well and never backed down from the challenges.

“We have a lot of belief in ourselves and we’re going to keep the same mindset that we’ve had through these last couple of games.

The series will now shift back to Lethbridge for Game 5 Saturday night at the Nicholas Sheran Arena in a massive tilt.

All is even up, and the advantage is there for the taking.

“We’re beyond the nerves and the expectation is that it’s going to be a fight,” Hamilton said. “It’s a neutral playing ground and we have to win one in Lethbridge. Mathematically it has to happen.

“If we want to be successful we have to accomplish that and Game 5 is our next chance.”