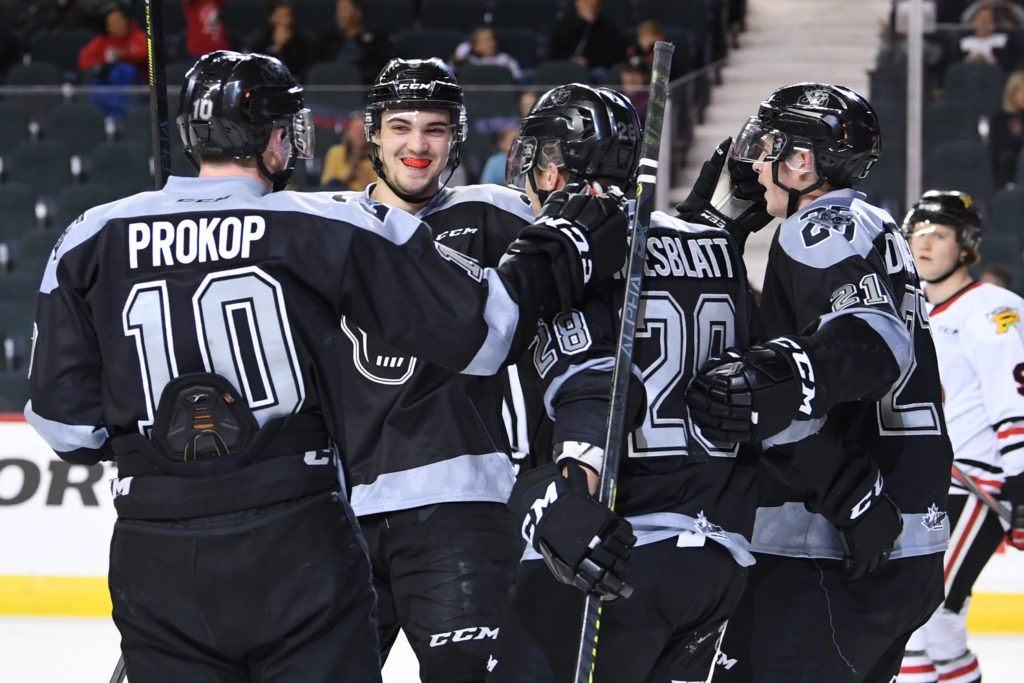 They’re coming out of the gate on fire.

Sunday afternoon at the Scotiabank Saddledome saw the Hitmen extend their win streak to four games with a 5-2 win over the Portland Winterhawks in the lone clash of the season between the two clubs.

After a week off the Hitmen were eager to get back into game action and it showed.

“I loved how we came out with speed and jump to start the game,” head coach Steve Hamilton said. “That’s a good team over there and we knew we had to bring our best in order to get the job done and I think the guys did a great job to focus in on our game.

“When you head into a game after a long week of practice sometimes it can take a second to get going but I thought we were great right off the hop.”

Egor Zamula, Jett Woo and Orca Wiesblatt all tallied a goal and an assist to lead the way while Josh Prokop and Tye Carriere rounded out the scoring. Jack McNaughton stood tall in goal making 31 saves to pick up his third win of the season.

For Portland, Jack O’Brien and Seth Jarvis provided the two markers with Joel Hofer ending with 24 saves in the loss.

With the win the Hitmen now move to 4-0-1 on the season and now have closed out games impressively in back-to-back clashes.

“Playing against this team last year that’s one thing I always remembered is how good they are in the third period,” Woo said. “We’re all on the same page in tightening things defensively and rising up to the challenge when the opponent is making that late surge.

“It’s always fun playing against a team you only see once and I know a couple of guys on that team so it’s nice to get the win and have those bragging rights.”

Zamula got things started on the power play as the import defenceman went for a shot-pass to the returning Mark Kastelic but found some puck luck as he was unable to connect on the feed but the puck wound up in the back of the net.

The Winterhawks responded quickly after but two back-to-back goals four minutes a part by the Hitmen had the home side up by two headed into the second with goals by Woo and Wiesblatt.

Prokop would then score the lone marker of the second stanza with a beautiful feed from Adam Kydd freezing Hofer and allowing Prokop to one-time it home for his second of the season.

Despite Portland getting one back in the third to make things interesting, the Hitmen shut things down with McNaughton making timely saves which then led to Carriere to ice the game with an empty-net goal.

Nine points out of a possible ten, not a bad start.

“I like our contributions from all the different guys throughout the lineup,” Hamilton said. “The depth we have lets us play in different styles and pace which is huge to have that luxury of on a night-to-night basis.

“We have a lot of character in the room and benefit from the work that may go a little unsung but make a big impact in the end.”